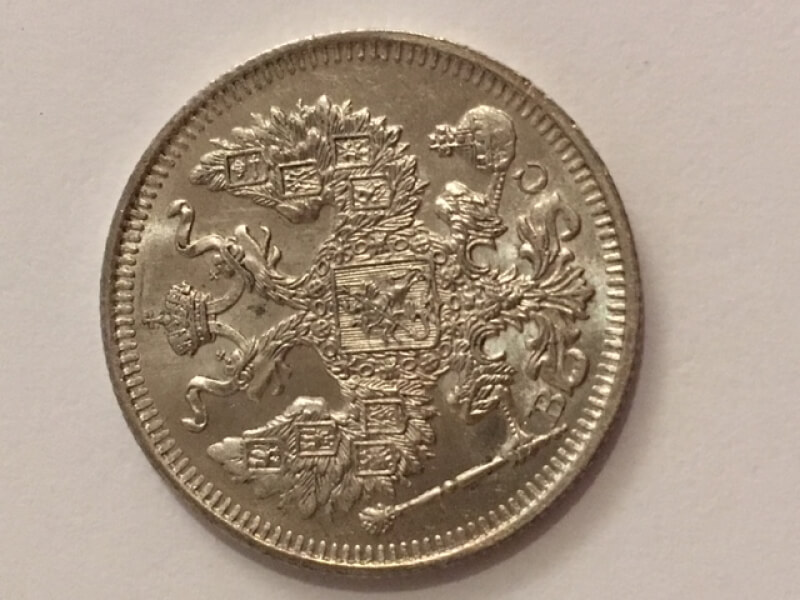 Eagles on the Imperial Crests of Coinage

Throughout history, imperial crests and coats of arms have been dominated by eagles.  Here are a few examples from Europe and Africa:

Russiaās silver 20 Kopeks in the early 20th century bears a highly detailed double-headed eagle.  The eagles are jointly crowned by a single Crown. In the middle of the eaglesā body, is the main coat of arms, while smaller ones are on each wing.  In its talons are a scepter and a globe with Cross on top. The intricate details are susceptible to wear, but in high grades, are beautiful coins.

This Eagle design dates to at least the early 18th century.  Over time, the design quality and level of detail has improved with technology - from crude outlines of birds to crisp lines in the 20th century.  The double- headed eagle was used until the fall of the Russian Empire in 1917.

The Austro- Hungarian eagle is very similar in appearance to that of the Russian Empire.  The double- headed eagles have a large crown above them, but each have their own smaller crown as well.  The eagles have their own coat of arms on their chest, but lack smaller ones on the wings. They also grasp a globe in its right talon.  Instead of a scepter, it has a sword in its left hand. This design was used until the end of the Austro - Hungarian Empire after World War 1.  In its wake, the Republic of Austria was born. It would have its own seal which bore its own eagle (with only one head though).

When Poland regained its independence in 1917 after 150 years of occupation, their Marka coinage bore a Crowned Eagle representing the Kingdom.  This single- headed bird is far less elegant than its Russian and Austria counterparts, with awkward looking talons and legs. The Eagle has far less symbolism, without a coat of arms on its chest or a globe in its talons.  When Poland became a republic in 1923, eagle became simpler still, losing its crown. This eagle looks more natural, although its wings curve unnaturally towards its head to fit on a circular coin.

In 1958, the people of Egypt and Syria ratified the union between the two countries, creating the United Arab Republic.  The union between the two countries lasted only three years, but Egypt continued to use the name on its coins for another decade.  The eagle was very different from the imperial ones discussed above. It was much simpler in design, with unadorned wings pointing down.  The shield on its chest bears two stars, but is not grandly decorated. It is standing on a pedestal, with empty talons.

Next week: Eagles from the rest of the World

The mint state version of these coins is an artistic sight to behold. They represent power and grace.

Very nice blog. Well researched and sourced. I can't wait to see what we do to the eagle on the reverse of our Silver and Gold Eagle designs next year. Thanks.

Thanks for the interesting blog.

On the coin you picture the globe with a cross on top is an orb that represents the church. The scepter represents the government. By having a larger crown over the smaller crowned double-headed eagle represents that the ruler represented by the large crown has authority over both the church and the state. This design is very similar to that of many European nations who are or once were ruled by kings. I own a 1908 Austrian coin with a similar eagle design but the eagle is holding both a scepter and a sword in is left talon. The coat of arms on the eagle's breast represents the house of Habsburg-Lorraine. The following is a link to a full description of my coin and its place in world history. https://coins.www.collectors-society.com/wcm/coinview.aspx?sc=232747

Everyone loves Eagles on coins ! Would like to have some Russia gold coins. Thanks for the infornation. Always nice to see something new. Thanks

I liked the blog. Do you own any of these? Or are you taking them at random. . We can write about anything but most write about The coins they own.

Yes. The photographed coin is a new addition to my collection.