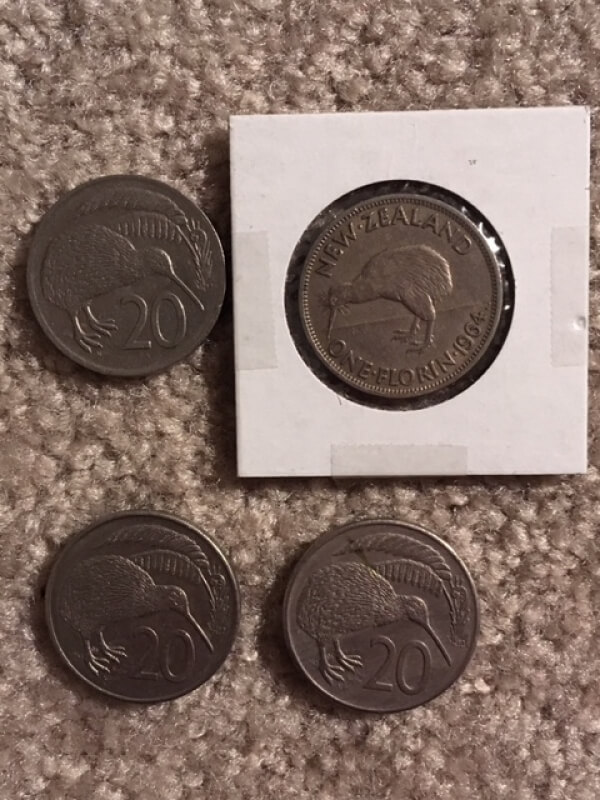 Ever since New Zealand was a British colony using the Pound Sterling, birds and other animals have been a repeated theme on the currency.  This article explores some of those coins featuring a variety of birdsâĶ

Beginning in the 1930s, the New Zealand issue of the 6 pence had a huia bird on the reverse.  This design was used under Kings George V and George VI and Queen Elizabeth II. The huia was a wattlebird that lived in New Zealand until it went extinct in the early 20th century due to habitat destruction.  This bird continued to be on coins until the 1960s, when New Zealand moved to decimal currency.

At the same time, the penny had its own bird - the tui.  It lives in forests and unlike the huia, the tui is widespread throughout the country and is not threatened by extinction.  Its image on the coin shows a shorter beak, giving it a more calm appearance. The tui penny was issued under King George VI and Elizabeth II from the 1940s - 1960s.

The title of most famous of all New Zealand birds, however, goes to the kiwi.  This flightless bird has been featured on a series of their coins over the last 90 years.  Despite its prevalence on coins and its fame as National Bird, all species of kiwi are nationally vulnerable or endangered, resulting from habitat loss and predation by domesticated animals.  The kiwi was first depicted on the New Zealand Shilling in 1933. That coin shows a long beak pointed at the ground, and no tail. At the time, the coin was silver and had George V on the obverse.  It remained on the Shilling until 1965, when the country moved to the Dollar. The old shilling became the 20 cent, and so the Kiwi moved to the new 20 cent piece. The new design flipped the bird to face right and added a plant in the background.

The kiwi is also featured on the $1 coin, and has been since 1990.  The design is similar to the 20 cent coin, but the coin itself is smaller and of different materials.  Different species of kiwi have also been the subject of non-circulating 1 oz silver dollars from c.2005 to present.  More unusually, the kiwi is also depicted on gold and platinum $150 coins for the 150th anniversary of the Founding of New Zealand.  Mentioning nothing of the anniversary (except the denomination), the coinâs reverse is dominated by a kiwi and fern leaf.

I personally like the 20 cent pieces the most, because they are easy to collect, and cost nothing compared to gold kiwis.  They can be found at coin shops for as little as 10 cents.

An interesting design for sure. I guess you have to live there to understand it?

The birds always looked like they were searching for lost pocket change or maybe missing keys. Its a good sign when a nation puts its wildlife on their coinage and shows they care about the environment.

The wildlife of North America would be an excellent theme for our regularly circulating collector coinage. I am tired of the old men in our 4 circulating coins.

I have been a bird lover for years and at one time bred mitred conures. This love of birds led to my own theme based collection of bird coins entitled, "For the Birds." In this set, I also feature an extinct bird and like you have a number of coins from New Zealand. The dodo bird is featured on the reverse of a 1971 10-rupee coin. The following is a link to my collection https://coins.www.collectors-society.com/WCM/CoinCustomSetGallery.aspx?s=982

Collecting coins by an individual topic makes the hobby interesting.

I like those kiwi coins. Have you ever seen Kiwi shoe polish? It would go good with your collection. Nice blog. Thanks for the sources..

I like coins or tokens like this. Ireland were I come from all the coinage has some type of bird or animal. Some of Britain's tokens also. Thanks for the blog and information. Mike