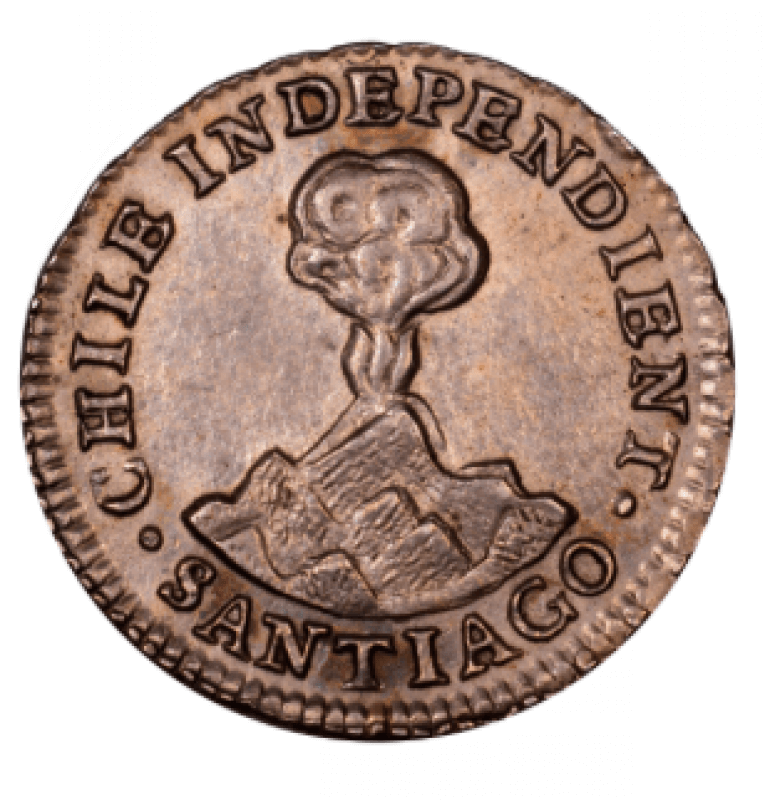 Numismatics and history are very closely connected.  From the earliest coinage to modern commemoratives, coins tell the story of triumph, conquest and tragedy throughout history.  They tell the story of kings and of revolutions, exploration and innovation. This series looks at the history of the Modern World through the lense of 20 coins.

The Age of Revolution: Chile

The Napoleonic War altered more than just the map and trajectory of Europe.  It had implications from the United States to South America. With the Spanish government defeated by Napoleon, the colonies took the initiative for their sought-after freedom.  Revolution flared up from Mexico to Chile. In Chile, a new government was declared on September 18, 1810, and they began to move towards autonomy. There was tentative peace from 1810 to 1813, while debates ensued over the extent to which Chile should be independent.  With control of Spain returned to King Ferdinand VII when Napoleon's troops were beat back into France, the Spanish began reasserting control over the colonies in 1814.

The leaders of the revolution (including Bernardo O'Higgins, Jose Miguel Carrera) fled to Argentina.  There they regrouped, and with the support of JosÃĐ de San Martin, leader of Argentina, led an army into Chile in 1817.  They defeated the Spanish the following year, declaring independence, with O'Higgins as "director." O'Higgins' government lasted only until 1823, undone by internal strife, disputes with the upper class and failed harvests.  30 governments held office over the next 7 years, until Diego Portales ruled as dictator for the following 7 years.

Under Portales' government, the Santiago Mint began striking Âž and Â― Real coins in 1832.  Of them, the Âž Real was the most simple design, with only a date and the words "Un Cuart" on both sides.  The Â― Real was struck beginning in 1833. It has the words "Chile Independient" on the obverse surrounding a volcano, representing the Andes Mountains which runs the length of the country.  The reverse has the mottos "Union and Strength" and "Liberty". The date is on the bottom of the reverse. This coin was only minted for 2 years, with a small mintage of 36,000. As a result of its scarcity, this coin is valued at $15 in Very good (average circulation) and $550 in Uncirculated.

All throughout Latin America during the early 19th century, new countries were gaining independence from the Spanish Empire.  Instead of a single currency covering a continent, there was a huge new variety of coins, from the Mexican Peso to the Chilean Real.  Revolutions would continue through the century, sweeping across the Americas and Europe, eventually reaching the United States in 1860 with the American Civil War.  This war would revolutionize military technology and alter the history of American coinage.

Next: The American Civil War and Confederate Currency

You are a very good writer! Thank you for your time.

Thank You for the fascinating history, Your're right, coins reflect the history of each nation that issues them, that's why Numismatics is the hobby of Kings.