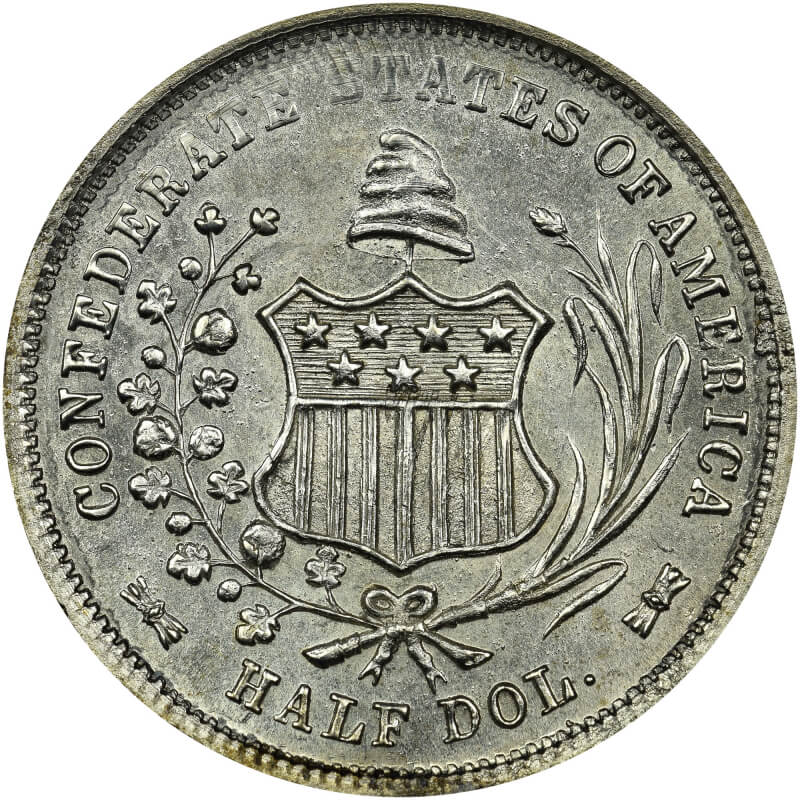 Numismatics and history are very closely connected.  From the earliest coinage to modern commemoratives, coins tell the story of triumph, conquest and tragedy throughout history.  They tell the story of kings and of revolutions, exploration and innovation. This series looks at the history of the Modern World through the lense of 20 coins.

The American Civil War had been brewing for decades before fighting broke out in 1861.  The North and South had made uneasy compromises since 1820, but things began breaking down in the 1850s with âBloody Kansasâ - violence for and against slavery in the purposed new state.

The new Confederacy, made up of 13 southern states, had 3 of the 4 mints in the United States.  New Orleans, Charlotte (NC) and Dahlonega (GA) were all in the South, while only the Philadelphia Mint was in the North.  The Philadelphia Mint had been the first established, back in 1792, while Charlotte and Dahlonega established in the 1830s to strike gold from the mining regions in Georgia and the Carolinas.  When the Civil War broke out, the New Orleans Mint, also from the 1830s, began minting coins for the new Confederacy. The mint struck 2.5 million half dollars between 1860 and 1861, with 1 million of them struck under the Confederate States.

The Confederate design looked similar to previous American designs.  The obverse shows a seated liberty, holding a liberty cap (similar to those on South American coins).  The reverse has a shield, similar to the US 2 cent piece from the same time period. However, the Confederate design has a 7 stars arranged in 2 rows on the upper part of the shield to represent the original states in the CSA, similar to the 13 stripes on the American flag.  Above the shield is another liberty cap. Around the shield is a cotton stem and what looks like grain (similar in design to the olive branch held by an eagle on later US coins). On the outside of the design is the word âConfederate States of Americaâ and âHalf Dol.â

The Confederate currency, much like the early American Continental, lost its value to inflation, when the South was unable to export its cash crops to Europe.  There are stories of merchants measuring portions of food based off the size of the Confederate banknotes, which were also worthless (although they have substantial more value today).

New Orleans fell to the Union forces in May of 1862, costing the Confederacy one of its largest ports and also its main mint.  However, the mint had closed one year and a day before, due to a lack of bullion for minting. The Union Navy had begun a blockade of all Southern ports, causing a shortage not only of metals, but also food and war materials.  By the end of the war in 1865, the Southern economy was in ruins, not only from the devastation from fighting, but also from the blockade, which prevented traditional exports from leaving. The Civil War put an end to slavery and also transformed modern warfare.  The first use of trench warfare, the first use of ironclad warship instead of wood ships, the use of railroads to transport troops and weaponsâĶ all happened in the Civil War, setting the stage for future conflicts to come.

At the same time in Europe, military leaders watched the new technologies coming out of America.  But at the same time, war broke out in Italy and then Germany. The final phase of the Age of Revolutions was at hand, with the Wars of Unification in Italy and Germany.  With the merger of Italian and German states, the number of independent countries issuing coins was about to drop dramatically.

Next: German Unification and the Mark

I read a book about kids who found a Confederate Gold piece, it was fantasy, but it was interesting to hear about the history about it.

Always wished the Confederacy had struck more coinage. The abundance of paper money is nice, but hard specie would have been more interesting. It could have opened up another realm of period coinage, much like collecting colonials.