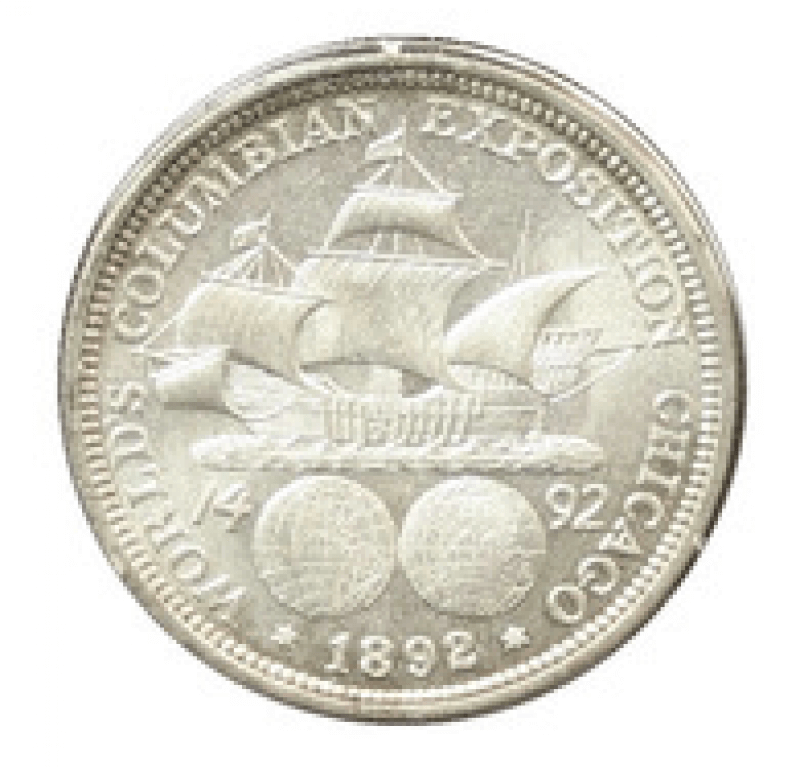 Numismatics and history are deeply interconnected.  From the earliest coinage to modern commemoratives, coins tell the story of triumph, conquest and tragedy throughout history.  They tell the story of kings, queens and presidents and, exploration and innovation. This series looks at the history of the Modern World through the lense of 20 coins.

The first â€śWorldâ€™s Fairâ€ť was held in London in 1851, as the Crystal Palace Exhibition.  The US hosted its first Worldâ€™s Fair 25 years later in Philadelphia, which was not successful.  By 1893, people had been working for a decade on a fair to commemorate the 400th anniversary of Columbusâ€™ landing in the Americas.  The fair opened in Chicago on the first of May, backed by the business tycoons of the era - including Vanderbilt, Morgan, Astor, McCormick.  In total, an incredible 20 million people attended during the six months of the fair.

The United States began issuing the Columbian Commemorative the previous year, in 1892.  The coin was designed by Olin Lewis Warner and engraved by Charles E. Barber (chief engraver of the Mint) and George T. Morgan (designer of the Morgan Dollar).  The obverse depicts a bust of the star of the show - Christopher Columbus - with the wording â€śColumbian Half Dollarâ€ť below. The reverse shows the Santa Maria in the center, with 2 globes below, showing the New and Old World respectively.  It has 2 dates - of 1492 and 1892. Almost half a million were distributed in 1892 and just over 1.5 million in 1893, for a total of 2,000,405. They were originally sold for 2 x face.

In 1893, the second commemorative was issued - the Isabella Quarter - for the Spanish Queen who charged Columbus with exploring America.  It is the only US Commemorative with a face value of 25 cents. The mintage was significantly less - at only 24,000 - and is thus worth 20 x more in Uncirculated condition.

The early American commemoratives continued with foreigners, with the Lafayette Dollar for the Marquis de Lafayette, the famous French general from the American Revolution.  This was the third different denomination in three commemorative coins. The first repeat denomination, first gold commemorative and first Americans celebrated on a commemorative would be the 1903 Louisiana Purchase Expo, featuring Presidents Thomas Jefferson and William McKinley on respective varieties.  The last two of the early classical Commemoratives were the Lewis and Clark Expo (20,000 mintage across 2 years) and the Panama Pacific Expo (51,000 mintage across 5 denominations/varieties). The gold $50 coins from the Panama Pacific Expo were made in both round and rectangle varieties, of which less than a thousand combined survive, making both extremely valuable.  After the Panama Pacific coins in 1915, the Mint went crazy issuing Commemoratives - 47 from 1916-1954, including 20 different ones in 1936 alone - covering everything from town anniversaries, state sesquicentennials, old counties, new bridges and early Americans. Many were of seemingly insignificant topics - such as the York County (Maine) Tercentenary.

Next, this series goes back to early 20th century and a look at Great War, which ended the Concert of Europe and truly brought the world into the modern age.

These early commemoratives were well designed and very artistic. They make a wonderful collection.

I like the design quite a bit, especially the Ship and Globes on the reverse. I have both years in circulated condition. From what I understand, most of these did hit circulation and that is why we find so many nowadays with good honest wear.

Classic commemoratives are some of my favorites. Thanks for the info, they do have an interesting history.

Historical coin. It is how commemorativess started.

I have always liked this early commemorative. It has a very cool history. Some very nice toned examples out there. Thanks.

Great set of coins. One of the greatest explorers. I have both beat up but I still like them. Thanks for the history. Every coin has one.