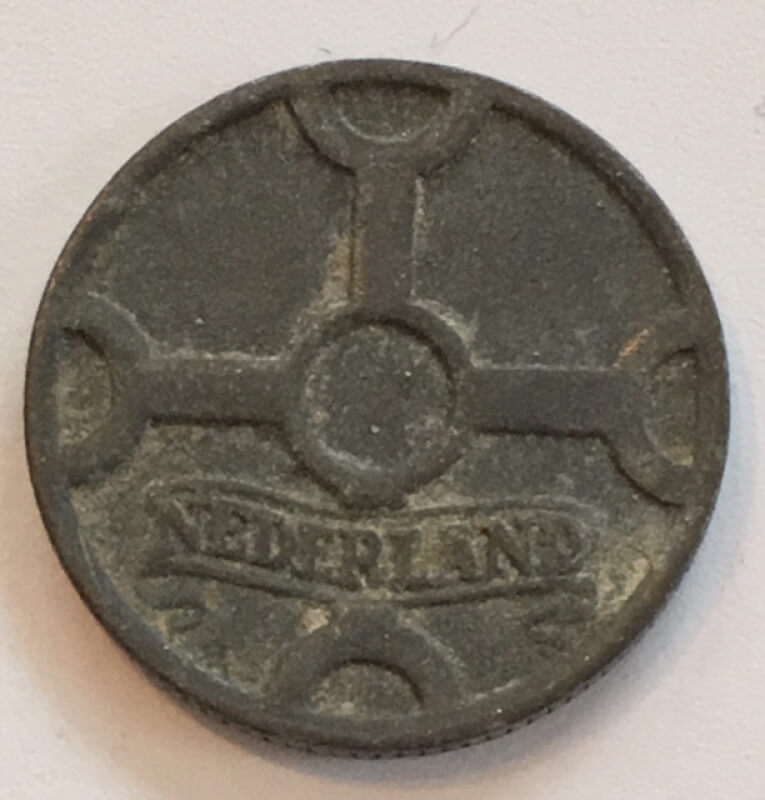 During the two World Wars, many countries in Europe changed their coin's compositions from copper to iron.Ý Copper was used to make shells, and other common coin alloys were also used in military works - tin, zinc and nickel.Ý In places such as the UK, the gold standard was frozen, lest war time uncertainties cause a rush on precious metals. Instead of gold coins, countries resorted to paper currency and less valuable metals, such as iron.Ý Today, copper is worth about $2.75 per pound, while iron is valued at $94.80 per metric tonne, or about 4 cents per pound. During war, iron coins were a cost saving measure and freed up other metals for use as war materials.Ý These advantages outweighed the long term problems of iron coins.

Because iron readily oxidizes with oxygen, these coins have suffered in the intervening decades.Ý Today, iron coins with their designs obscured by corrosion and rust are normal. It is more unusual and difficult to find them in good conditions.

The German Empire, surrounded and cut off from its mineral rich colonies in World War 1, moved to iron coins in the second year of the war, 1915.Ý Beforehand, the 1 Pfennig was made of copper. In 1915, its composition was changed to aluminum, a light weight, cheaper metal. The 5 Pfennig was changed from copper-nickel to iron.Ý The design remained the same, but the quality of the coin suffered due to its composition.

A coin that I had to search for a while to find in good conditions was the Netherlands occupational currency from World War II.Ý They fit the model of rusted, corroded iron coins. The one cent has a simple design - its obverse has the denomination, date on a banner and grain stalk.Ý The reverse has a cross with a circle in the middle and circles at the points. "Nederland" is on a banner on the bottom. Due to the dark color of the iron and exposure to air, the details are hard to make out.

The United States joined the iron-coin club with the steel cent in 1943.Ý (Steel being about 98% iron.) The steel cent was issued for only one year.Ý Like other iron coins, their quality suffers from the composition - they are often rusted or corroded.Ý However, the steel has a lighter color than iron coins, making it easier to observe the details.

Although iron coins are more unusual to find, rust and corrosion make them frustratingly difficult to find and collect in good quality.

Times of need require times of change. Move to iron was the cheapest and fast method to ensure commerce still existed.

Very interesting piece, do you have a photo of the obverse or is it just to corroded?

Thank you for your comment. I have added a photo of the obverse.

I recently bought a jar of the 1943 Lincoln war cents at an Auction. It was amazing how some of them were in very poor shape, while others looked really nice. I believe a may have a few foreign coins that are iron also. Nice information. Thank you for posting.

Intresting. do you own one?

I wouldn't want to carry a pocketful of iron coinage around. I guess you can also forget about any proofs.

Wartime expedients can be interesting. I know Japan tried porcelain coinage during the latter part of WW2 and the U.S. experimented with non-metal materials as well. Roger Burdette has a whole book devoted to U.S. alternative coinage experiments during WWII.

Nice blog. I never thought of other countries going to iron, steel or other metals as a war measure. Arrogant I recon. Good job. I would like to see the other side of your coin.. Thanks.

Reminds me of the 1943 cent. We needed copper for ammunition so for a year we used steel. It changed during most wars. In Britain they went to copper tokens and bronze. The civil war we used tokens also copper. Britain would not release gold.or.silver. They were near bankruptcy from our war with them they used tokens we did also. Great blog I didn't know about the other countries in Europe. It's nice to learn something new. Thanks. Mike