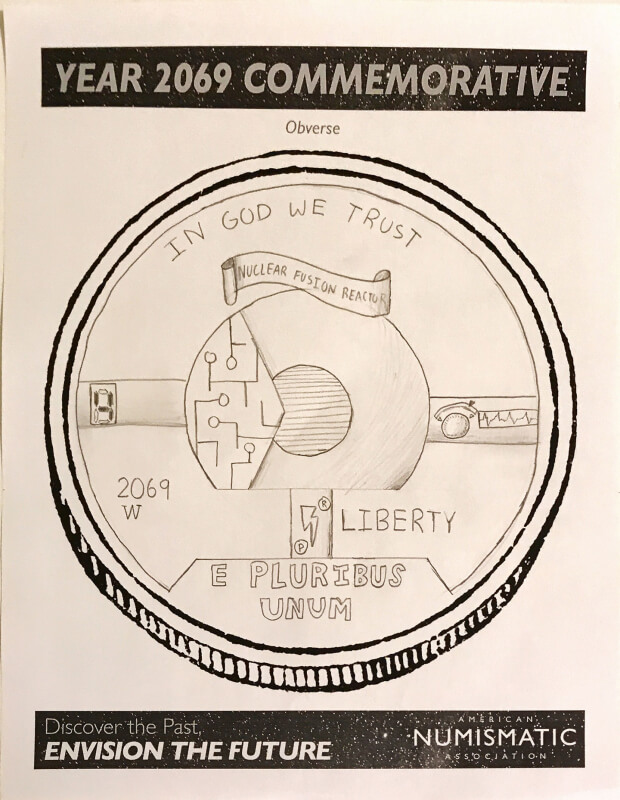 Congratulations to Young Numismatist Jeremy Sheng, who won the grand prize in the 2019 National Coin Week design contest. Here is his winning submission:

My coin depicts a nuclear fusion reactor. You might be thinking, doesn’t nuclear energy already exist? Well, yes, but that’s nuclear fission, the splitting of atoms. Fusion – combining atoms – produces four times as much energy as fission, and four million times as much energy as traditional fossil fuels. This reactor provides a sustained and constant flow of high energy on a scale that can change the way people live. Energy is the key to many things, from simple things such as powering a dishwasher, to more complex things like launching a rocket into orbit. Not only does this machine produce more energy, but it is cleaner than traditional fossil fuels and helps protect the environment from greenhouse gases and other pollutants.

that coin looks like its legit, very well though out.

Nice job. Looks better than the Innovation Dollars. I'd like to see a coin commemorating and struck using solar power.

Congratulate and don't stop there. We need collectors like you with vision in this hobby and you have it. Enjoy your prize and he proud of what you accomplished. Thanks

Superb job Jeremy! Energy is certainly an important issue, one that you addressed very well

That is a winner for sure. I really like the bases for your coin and the sketches. Energy truly is the basis for everything. E=mc-squared. Good job. I hope you won a fortune or a cool coin.. Thanks

I think Jeremy won the 5 ounce Apollo hockey puck. 2nd and 3rd were going to be the Silver Dollar, and the Half Dollar.