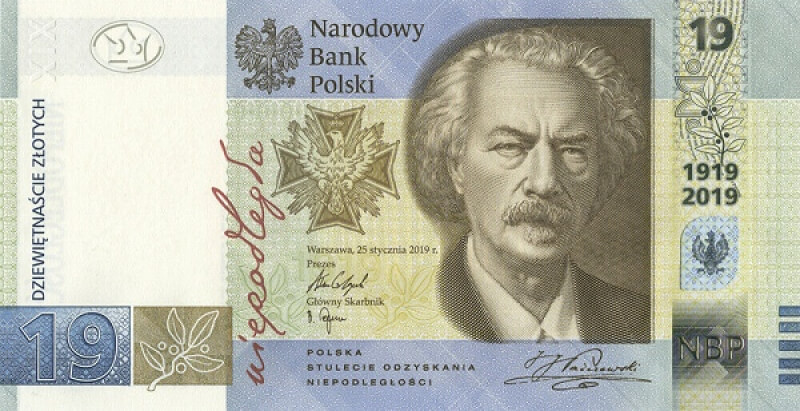 What is the weirdest number you have seen in the banknotes denomination? Definitely, the most popular numerical digits are zero, one, two and five. They are facilitate the multiplication and division, which in final results are giving numbers easy to put into banknotes. The first fully different nominal value added to a banknote was the number three in Russia, in the 19th century, which was followed by the number fifteen a few years later. In 1807 the number two has been used in UK currency and it hasn’t provided to any troubles in circulation. What about the number nineteen? Yes, nineteen, the prime number, which is avoided in nearly every way where a division operation is necessary? That nominal value believed it or not, has recently appeared in the Numismatist World A 19 Zlotych banknote was released in Poland, in the XXth of MONTH 2019, as a commemoration of the 100th anniversary of the Polish Security Printing Works (PWPW). The PWPW was opened in the 25th of January 1919 according to the decision of the Council of Ministers, from which the Prime Minister was Ignacy Jan Paderewski. The main purpose for opening the PWPW was to provide a next step to build/start a fully Neutral Country, which came back to European Maps after 123 years of occupation from the Polish–Lithuanian Commonwealth. The first name given to the PWPW building was the “National Graphic Factories” (PZG – Państwowe Zakłady Graficzne), which functioned until the 10th of July 1926, when all the details were being prepared to connect with the main name of the Institution responsible by the production of banknotes, the National Polish Bank. . The PWPW Building is located in Warsaw at Roman Sanguszko Street #1, and its construction was completed in 1929 according to Antoni Dygat’s project. Since 1929, the PWPW has been producing circulated banknotes, but not only for Poland currency. It was also producing official banknotes based on orders from other countries, like Paraguay and Georgia, in 2015 and 2016, respectively. All banknotes produced by the PWPW are well known in the Numismatist Word, as being the most difficult banknotes to counterfeit, due to numerous security features being used, which became also to be used by other countries institutions that produce their own currency, or other currencies on behalf of other countries. That explains the reason for the importance of the nominal value 19 for the Polish. It was added to that beautiful banknote to memorize the year of the opening of the PWPW building, 1919. The obverse of the 19 Zlotych banknote carries a portrait of Ignacy Jan Paderewski, an important person to be remembered in regards to the beginning of PWPW. In the banknote hologram, except years 1919 and 2019, nominal 19 and initiative of National Polish Bank, is also the window with Polish Emblem from 2nd Rep. (1918-1939), visible in the reverse too. The PWPW Building can be seen in the reverse of the banknote, together with the serial number and the PWPW logo printed with the SPARK LIVE technology, a sitoprinting technique. The keyword in this banknote is “Niepodległa”, which means “Independent” (showed both in the observe and the reverse), because this banknote is the continuation of the Polish series to commemorate 100 years of Polish Independence. Other security features used in this banknote is a special kind of latent image developed by PWPW, known as Umbra4Note, which is incorporated into the image of a laurel branch symbolizing brotherhood and victory. Also using this technique, the years 1919 and 2019 are printed as embossed text both in the obverse and the reverse, the crown in recto-version – which also appears in other regular Polish Zlotych banknotes, and the holograms visible in the UV light only. Those are just some of the numerous security features of this banknote, which is a signature mark of all banknotes being produced by the PWPW. If you think you would find any of the 19 Zlotych banknote in normal circulation in the streets of Poland, you are wrong. Only 55,000 banknotes of 19 Zlotych have been printed by the National Bank of Poland. The emission price of this banknote was 80 PLN and everything was bought from banks in 4 hours! If you are lucky to find this banknote somewhere, the prices would be at least 300 PLN. Good luck to those collectors trying to find it for a good price. But we can always dream with it, if we want!

that's the type of bill that will result in a double take any time an average-joe owner of it pulls it out of pocket... very interesting, great information, thanks!

Really interesting blog, 19 is certainly an eye opener for a bill. Your pictures are excellent.

Very interesting denomination; thanks for sharing pics and info about this odd note! The number 19 always reminds me of one of my most favorite hockey players while growing up, Steve Yzerman. Once I venture outside again, it'll be weird wearing his jersey with 19's all over it (though I'm used to people in Colorado giving me dirty looks for wearing a Red Wings jersey; totally understandable!) -Sam Gelberd, ANA Numismatic Educator.

Awesome bank note. Would love to have one, but not that much into foreign currency. Very interesting post. thanks

I wont be looking for it for a while! Until this virus leaves us. And life will get back to normal.