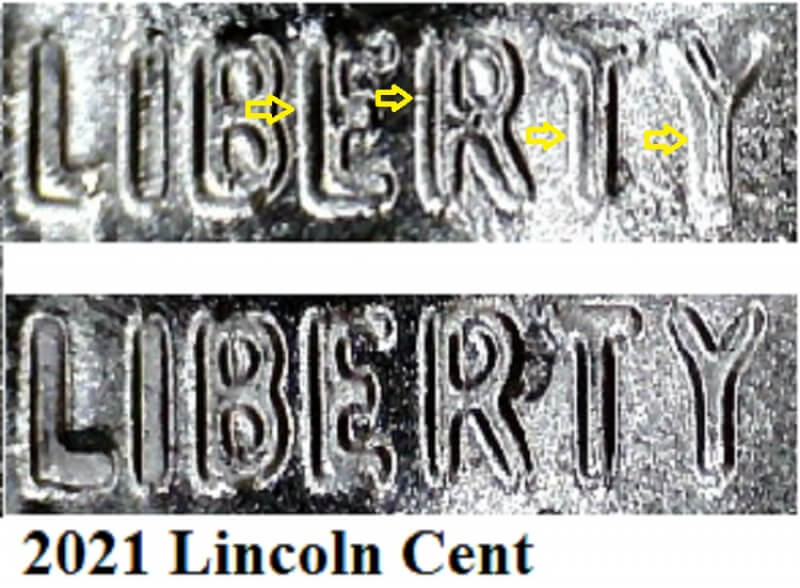 Since the US Mint is producing billions of Lincoln cents every year, the dies used in the stamping process will incur wear and fatigue. Thousands of 2021 Lincoln cents show doubling caused by wear on the dies. The coins are of no added numismatic value, and collectors need to recognize the difference between hub doubling when creating a die and die wear doubling. The most famous doubling caused by die wear is the "poor man's" DDO dated 1955. Not the raised area around the five.Ā

Machine doubling is different from die wear/fatigue doubling. Machine doubling shows a flat duplication of parts of the numbers and letters created from a slight shifting of the planchet in the collar. The collar is the third die since it places the reeded edge on dimes, quarters, and imprints lettering on dollar coins.ĀĀA typical machine doubled Lincoln cent is shown in the photo of the 1986 Lincoln cent. It is nearly impossible for one number or letter to be doubled since the die is made by pressing a rod into a hub.Ā Although Mint workers did modify dies before 1990 by hand, there are no known single letter or number modifications by Mint workers.Ā

Let me know if you would like more informative posts.Ā

Good info to have. Thanks for sharing.

Nice blog. I was searching wheats and came across many 1955 dates. Was wondering if any were poor man doubles, but didn't look very long at them.

Nice! Do you have and double die coins? I have a die cracked 1972 penny, but no double died coins.

Yes, I have found a few in bankrolled coins. My recent discovery is a 2019 DDO which is now certified as 2019 MS66 DDO. I also have a 1960-D D/D in BU condition, but the value is too low to send to NGC. I have hundreds of die cracks and die break Lincoln cents. I have sold many missing detailed coins at coin shows, especially 1990 missing the zero and 1991 missing the one on Lincoln cents. The 2019 DDO will be listed in my 2023 book.