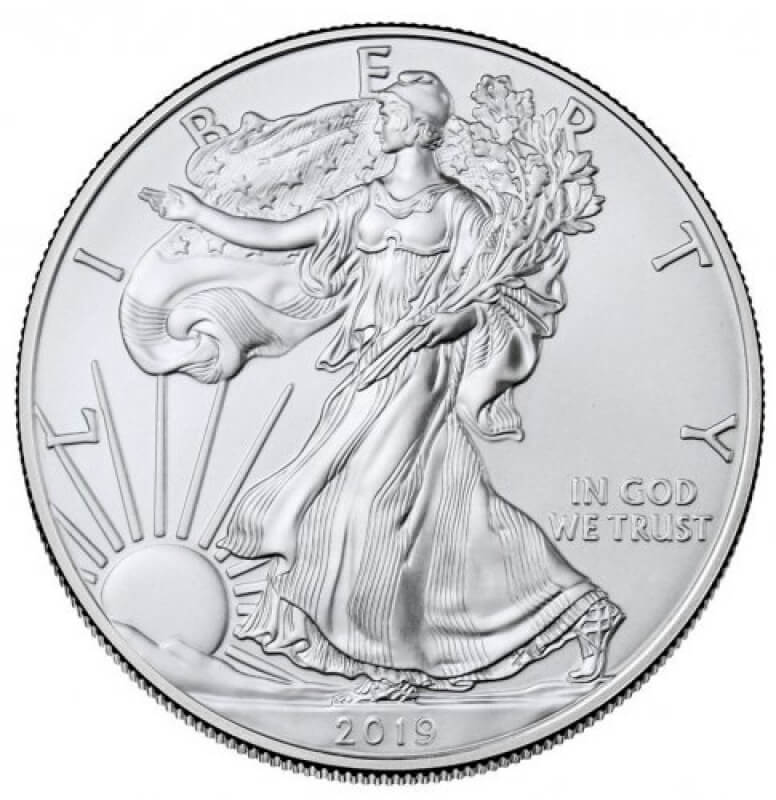 American Silver Eagles were first minted in 1986 as a result of the Liberty Coin Act introduced by Senator McClure. The Liberty Coin Act's goal was to shrink the national stockpile of silver by using it for collecting and investing of the public and everyday Americans. They are the official silver bullion coins of the United States, and they have a one dollar face value.

The obverse of the coin depicts Lady Liberty stepping into a sunrise, with the sun on the left side. Designed by Adolph A. Weinman, this design was first used on the Walking Liberty half dollar and was chosen for its beauty, as Theodore Roosevelt wanted to bring the art back into American coinage. The design was an instant success. The reverse is a much newer design and shows an eagle behind a shield. (Hence the name American Silver Eagle) The eagle carries an olive branch and arrows in its talons. There is also a group of five pointed stars to represent the original thirteen colonies that stood up to the British in the American Revolutionary War of the late 1700s. The reverse design is credited to John M. Mercanti.

There have been hundreds of millions of Silver Eagles made over the years, and that may sound like a large number, but the number of these made in thirty years is similar to how many United States pennies are made in a month. These stunningly beautiful bullion coins have done well continuously from 1986 to the present, their first three decades of production, and they should continue that success for many years to come in the future.

I like the Eagle always have. I like the varieties they have . I found out that 2018 burnished Eagle is very rare. Only 135,000. It also increased the price very well. They don't make to many of them. Rick Tomaska sold eight the other night for twenty four hundred dollars. That should tell you something. Not even the whole set. Thanks for your your blog. I enjoyed it very much.

Glad you enjoyed it.

The Proof and Burnished Eagles are sold by the Mint directly to individuals. The Mint also sells bullion grade eagles to designated large volume dealers for further distribution through coins shops, etc. These bullion grade eagles trade at or near silver spot, unlike the proof or burnished.