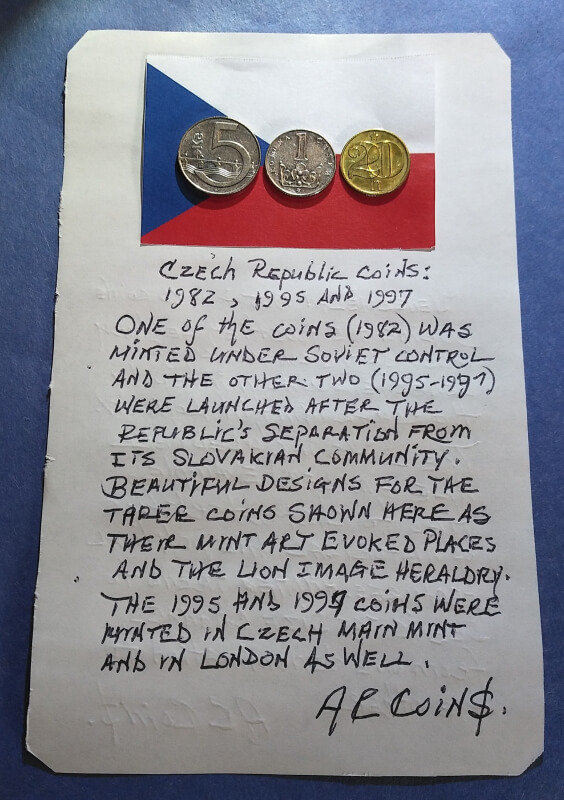 "Czechoslovakia" was the official name of the Czech Republic until its parlamentary dissolution  in Winter of 1997 thus becoming two different states Slovakian Republic and Czech Republic. One of the three coins presented here was minted and circulated under Soviet control from 1982 until 1990, the 20 "halierov" or hellers. I also included a 1997 One "Koruna" (crown) coin and a 1995 five Korun coin. Beautiful as they are, they evoke a Nation's struggle to ocercome many established governments and forge its own socio-cultural presence since the entire region belongued to the Austro-Hungarian Empire three centuries ago.

The official name in Czech is koruna ÄŤeskĂˇ (plural koruny ÄŤeskĂ©, though the zero-grade genitive plural form korun ÄŤeskĂ˝ch is used on banknotes and coins of value 5 KÄŤ or higher). The ISO monetary code is CZK and the local acronym is KÄŤ, which is placed after the numeric value (e.g., "50 KÄŤ") or sometimes before it (as is seen on the 10-koruna coin). One koruna equals 100 halĂ©Ĺ™ĹŻ (abbreviated as "h", singular: halĂ©Ĺ™, nominative plural: halĂ©Ĺ™e, genitive plural: halĂ©Ĺ™ĹŻ - used with numbers higher or equal to 5 - e.g. 3 halĂ©Ĺ™e, 8 halĂ©Ĺ™ĹŻ), but halĂ©Ĺ™e have been withdrawn, and the smallest unit of physical currency is 1 KÄŤ. Despite its withdrawal halĂ©Ĺ™e are still present in prices of various products, but are rounded to koruna at checkout.

However, the Republic is part of the European Union and thus honors the Euro in all transactions.

Very nice! Thanks for the information! ; )