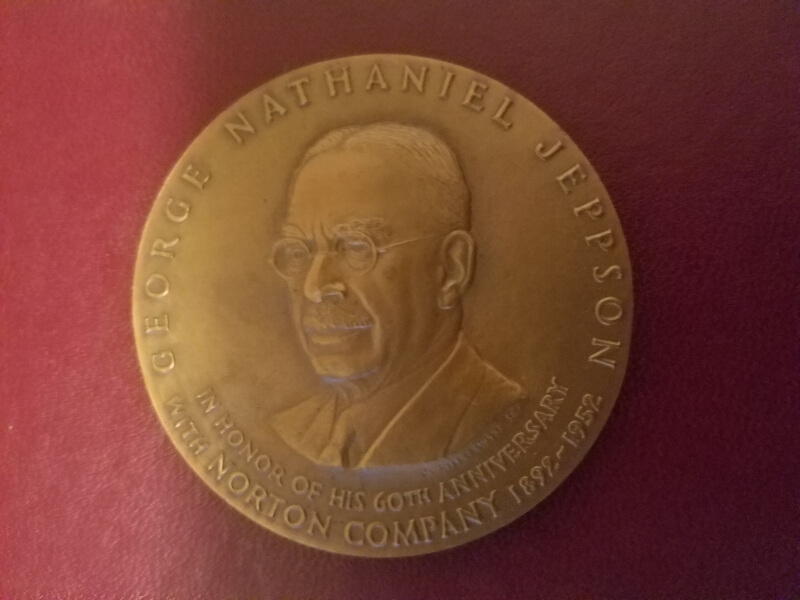 Mr. George Jeppson was General Manager of Norton, then treasurer, president, and chairman of the board. 60 years of service !

George Nathaniel Jeppson was born April 14, 1873 in Worcester. His father, John Jeppson, was one of the founders of Norton Emery Wheel Company.   George Jeppson began working for Norton in 1892. He was a student at WPI with the Class of 1897, but did not complete the WPI course, instead continuing with a training course at Norton until 1897, then studying at the Royal School of Mines in Stockholm, Sweden for a year. He became Assistant Superintendent at Norton in 1898, and in 1919 became Secretary and Works Mangager, then in 1932 Treasurer and Vice President, and in 1941 President, retiring from that position in 1946 and becoming Chairman of the Board of Directors

Below are a couple links to read up on this interesting man.

Back in the day if you had a medal struck in your honor, you sure must have been somebody!

Very fascinating! I enjoy the beauty of medals, and this one certainly checks that box for me. Nice buy! Cya 'round!

Cool medal! Thanks for sharing it with us ; )

Interesting. Cool meal. Good reason for buying it. Thanks.

Great find. I like medals they tell stories also.. I enjoyed this one. Thanks for looking up the history !!

Good looking medal Golfer! I spent some time near Shirley, Mass. ! A little place called Ft. Devens, that is also close to Boston. Nice story and also interesting. Thanks for the post!

Very nice medal! I don't really have much to say though, because I don't know much about medals. Well, thanks for the update!

Is it a MAC medal?

Yes it is. The box says Medallic Art Co.

Bama, what are you talking about Pally, you're certainly clinical! Rofl. Great Medal, 60 years, awesome! Loved the blog.

That's a nice medal, thank you for telling us about it. What kind of company is Norton? I looked up WPI, they have a master's degree in neuroscience that I would have been really interested in about 35 years ago, maybe instead of going the clinical route.