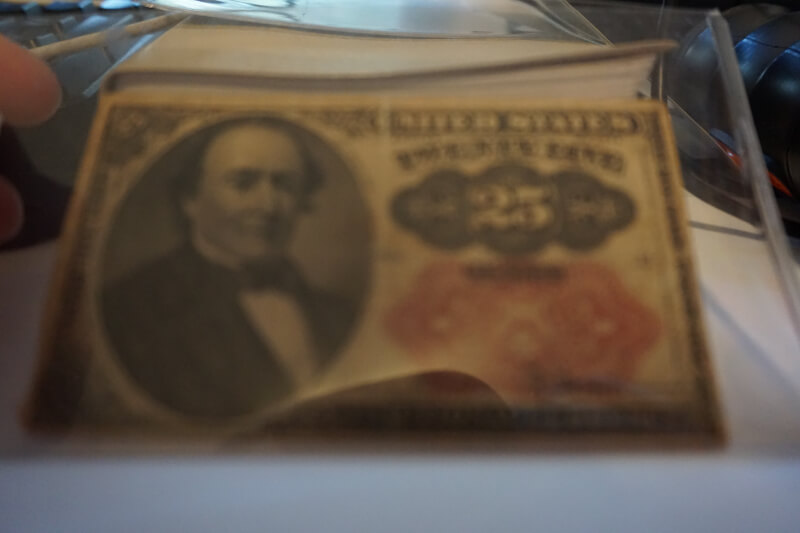 In the 2022 YN Auction I won a piece of 25 cent fractional currency. I thought it would be fun to research it and write a blog about it.

The first period started in August of 1862 and ended in May of 1863. The denominations for the first period are 5, 10, 25, and 50, cents. Perforations were started but soon discontinued.

On the 10 cent note there is a portrait of George Washington. The bill is 65 by 43.5 mm. The 10 cent bill is worth $22 to $4,690. If you like collecting coins with Washington then maybe you would like this bill for your collection.

On the 25 cent note is five stamps. The bill is 65.5 by 45 mm. The bill is worth anywhere from $22 to $4,000. this bill is cool because if you collect coins, currency,and stamps then this bill has a part of all of those collection. The bill face value of 25 cents like a quarter, it is a bill like a dollar bill,and it has five stamps with Thomas Jefferson on it, all on the same bill!

I will write another blog about the last three issues of fractional currency.

Love fractional notes. My taste is a bit older, British and Continental. A word of advice for collecting these, graded only as counterfeits are extremely tough to spot. They even fool seasoned dealers.

Nice blog. Enjoyed the lesson on fractional currency. Thank you.

I enjoyed your blog and admired you for taking the time to learn about the fractional currency in your collection. Congratulations.

Good research, really enjoyed your blog, it is definitely an area of non-expertise for me.

Nice note and a fun series to collect and relatively inexpensive compared to other notes of the same time period.

Awesome note, and great job on the blog! Thanks!!

Nice blog! Definitely a piece of history in your hands! Good for you. ; )

Great read! I am not really into paper currency, but fractional currency is an interesting subject. Thanks!

Great info on fractional currency, why it was created, when, and variations thereof. Just one of many changes/disruptions brought about by the Civil War.

Fractional currency is a great subject. Thanks for writing about it. A space in time of our American history. It became extremelly attractive among southern states collectors and it still is an example of currency that should be a cornerstone for its cultural value. It has been said that some arks or vaults found at Civil War forts were saved and preserved by regional authorities. I should inquire about war paper money on my next visit to Fort Zachary Taylor... great blog!!!

Good blog. Good research!. One thing the high prices depend on the condition of the note. These were used allot and many don't hit that high at all They judge paper quality and folds nicks anything that shows the least damage. I enjoyed it very much. Very well done!

Well done. You did exactly what should be done. You Have a piece of coin or currency and researched it. Great blog. Thanks.