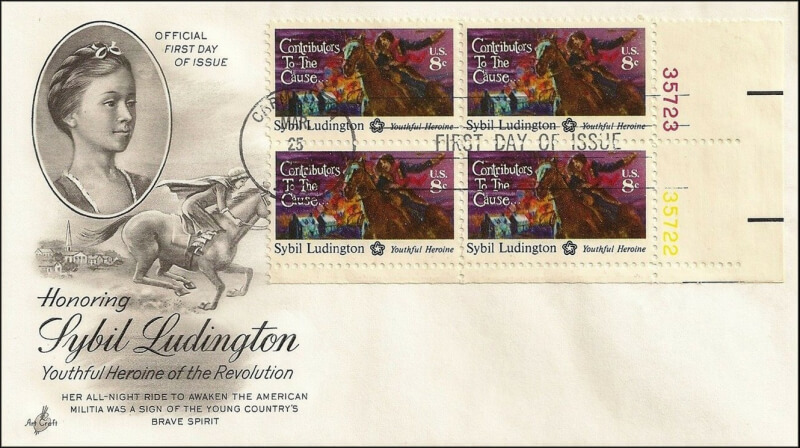 Sybil Ludington was a 16-year-old girl who reportedly rode her horse Star 20-40 miles (estimates vary) on the night of April 26, 1777 through Putnam County, NY using a stick to prod her horse and knock on doors to alert militia forces under the command of her father Henry Ludington of the approach of British forces.Ā

In honor of her heroic ride (which was two or three times as far as 40-year-old Paul Revere rode on April 18, 1775) the town in which she was born, Fredricksburg. NY, was renamed Ludington, historical markers were erected along the route of her ride from Carmel south to Mahopac and north to Stormville, NY, a statue of her was erected near Carmel, NY, and in 1975 the United States issued a postage stamp in her honor.ĀĀ

However, although Sybil Ludington was an historical figure (April 5, 1761 to February 26, 1839), her ride may be fictitious. Unlike the ride of Paul Revere, there is no contemporaneous evidence of it. The first report of her action appeared in a book written in 1880 by a local historian and provided no documentation. And, there is contemporaneous evidence that many along her route already knew the British were coming.Ā

But, why shouldn't we have a young, even if mythical, heroine, who personifies the values of our country at its founding?Ā

Now that's an added stop on my next ride into New York. Would have added it to the Laconia Bike Week I had planned this year, but as expected it is cancelled.

The poem is the main reason we think of Paul Revere.

Sybil deserves her own medal. Her story is certainly worthy of a medal. Might be a topic for an area coin club medal? Coin clubs put local history on their medals all the time.

I say we rename it "The Midnight Ride of Sybil Ludington". Has a kind of ring to it. I can just see Sybil galloping past Mr. Revere and he saying to himself "Well Sybil's Got This, Imma turn around and hit the hay".

She was in fact the one who rode t concord to.warn the Minutemen to movebthere arms and ammunition. She did get there in time. Very good blog. Mant people think it was P. Revere when a 16 year old.rider met him and she continued on riding as fast a she could. Thanks a great medal but where is hers?. He also made silverware. Very fine. And coinage.. Thanks.

Informative posting, but sadly never heard anything about her. The Revere medal is beautiful, although I'm surprised they depicted an older Revere.

Keeping a sister down. Seiously, I choose to believe this. We need more heros right now.. Very cool Post card.. Thanks. Well done.