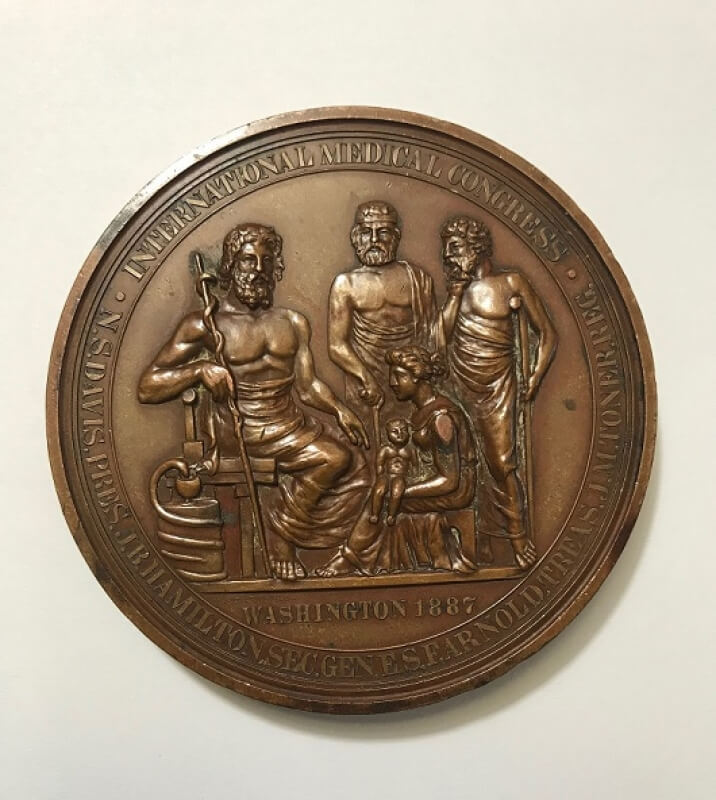 Charles E. Barber (1840-1917) was a master steel engraver and the sixth Chief Engraver of the U.S Mint in Philadelphia. He designed more United States coins and medals than any other artist.

Among the medals designed by Barber on occasion of special events of the country is the “1887 International Medical Congress Medal” (Bronze, 76 mm). The obverse, the bust of George Washington with the inscription: UNITED STATES OF AMERICA/FOUNDER OF THE REPUBLIC. On the reverse: INTERNATIONAL MEDICAL CONGRESS/N.S. DAVIS PRES. J. B. HAMILTON, SEC GEN E.S.F. ARNOLD, TREAS. J. M. TONER, REG/ WASHINGTON 1887.

The group of figures on the reverse of the medal is intended to symbolize medicine. Asclepius, a god of medicine in ancient Greek religion, is here represented as a noble and venerable form, draped in classic costume, seated, holding his staff entwined by a serpent, and attentively examining a sick child, being held on his mother’s lap, who is seated on a low stool. Two men are represented as standing soliciting the services of the physician, one with a staff and bandaged head, the other supporting himself upon a crutch. (1)

The Congress was the ninth celebrated in United States with the participation of American and foreign doctors who met in Washington D.C. to share their experiences and treatments of different diseases, the medal that was engraved in the U.S. Mint was sold to all participants at a cost of 5 dollars.(2)

Great looking Medal! Thanks for the history on this one!

Beautiful medal. The medals allow for the engravers skill to run free. Thanks.

Any Barber collector would love to own this. A talented sculptor can really show his stuff on a medal.

Beautiful medal, with a fascinating background. Thanks for sharing. Jim

A beautiful medal. Engravers are given much more freedom on medals, and it shows. Charles Barber was extremely good, my favorite.

iId like to see someone publish a book with everything Barber ever did in his lifetime. This would include medals, coinage, patterns and whatever else, along with a good biography/timeline. I believe Barber and his work is worth it.

Agree with Mike272. I enjoy collecting and looking at medals. Medals add so much to one's collection.

Beautiful medal . I appreciate a good medal. They mean so much along with there design. Its to bad they don't make them like they used to. You have a great set. Very nice pic up. Thanks for the blog the history and the picture means a great blog. Thanks.

I am starting to appreciate Mr. Barber's efforts more, now that I see his many non-mint works. He, like all other designers of coins have a certain amount of their creativity constrained by the requirements of a circulating coin. Thank you for enlightening me further.