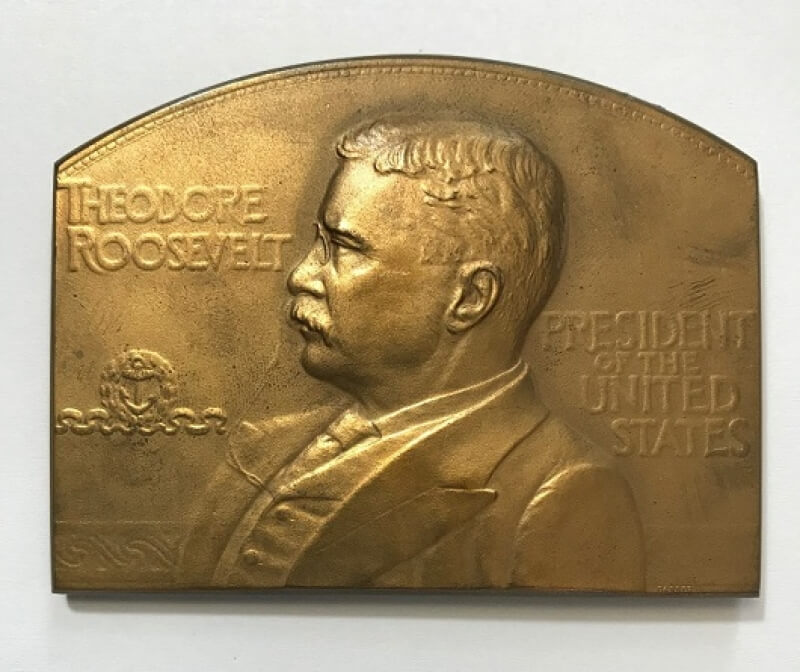 The “Great White Fleet” Medal commemorates the goodwill voyage around the world made by 28 U.S. warship. This medal was produced in the U.S. Mint in Philadelphia in 1907.

The obverse designed by Charles E. Barber on this plaque-shaped bronze medal show the bust of the President Theodore Roosevelt with the inscription THEODORE/ROOSEVELT PRESIDENT/OF THE/ UNITED/STATES.

The reverse was designed by William T. Morgan. Columbia is depicted, waving farewell to the ship as a cherub holds a flag. Columbia’s right hand supports an atlas.

Although it was described as a goodwill trip, it actually underscored America’s naval strength and served as a warning to Japan, with whom the U.S. was experiencing tense relations. Because of the ship impressive color scheme, the flotilla was known as “The Great White Fleet”, but Roosevelt called the ships “heralds of peace” (1)

That's a beautiful medal! Thanks for sharing it with us!

Thanks for a great blog. Beautiful medal. Thanks fir the sourcing.

Awesome blog! Looks like a great medal :) Thanks for sharing.

Lovely medal, work of art. And it's not round. Medallic art has many shapes and forms.

A wonderful medal, and great to see that although competition is always high for engravers, they ere alble to work together and produce a wonderful bust of Theodore. Thanks.

Thanks for the blog. That medal would be a great addition to anyone's collection. Medals tell stories.

Great medal it says alot about a great man in simply sentence. That's perfect. I like it . My problem I love the medals overseas. That's just what I us to like. There very into detail and pick very precise subjects. Where ever you go I believe medals are very underrated. Not enough press as I would say. Some are quite big others two inches. What ever the case if i was still collecting in would be buying on both sides of the Atlantic. Thanks for a blog on something that more people should know about. Thanks Mike.

Beautiful medal, I especially like the reverse motif. Thank you for bringing it to our attention.