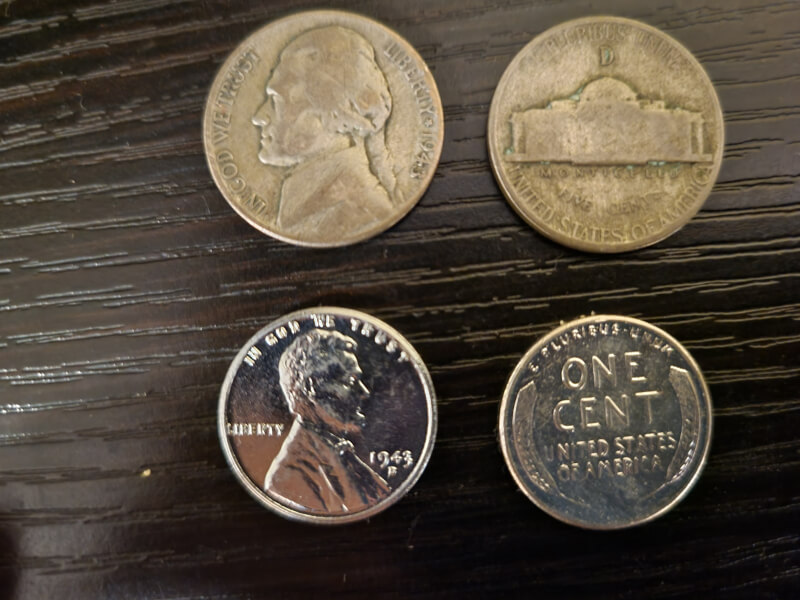 During World War II, the composition of two denominations of US coins were changed. These two wartime coins, the steel penny and the wartime nickel, are two very well-known types of coins. The first, the steel penny, was only minted in 1943, but there are two major composition errors, which today are worth over $100,000. These two error coins, the 1943 copper cent and the 1944 steel cent, are two of the most valuable Lincoln cents that you can buy. The 1943 steel penny is composed of steel with a very thin layer of zinc on the outside of the coin. There are three ways to tell the difference between a steel cent and a copper cent. The first of these ways is the most simple: check the date. If the date is 1943, there is a very large chance that it is a steel cent. The second way is another simple one: look at the color. If you look at the picture that I have included with this post, you will see at the bottom of the photo, there are two cents with a bright gray color. These are steel cents. I have shown some replated steel cents, which means that a private company replated them with zinc. The third way to tell is just as simple, but requires a magnet: as you may have guessed, try to pick the penny up with a magnet. If it sticks, then it is steel.The second coin I am doing this blog about is the wartime nickel. The wartime nickel was minted from 1942 to 1945. The composition of these nickels have been changed from the traditional 25% nickel and 75% copper to a composition of 35% silver, 9% manganese, and 56% copper. There are two main ways to tell the difference between a wartime nickel and a normal nickel. The first is very simple: check the date. If the date is 1943, 1944, or 1945, then you have a wartime nickel. A 1942 nickel also may be a wartime nickel, but it will take the second way of testing to be completely sure. The second way is also simple: check the reverse of the coin for a mintmark, which in a wartime nickel will be above the dome of Monticello. In the picture I have included in this blog, you will see that the nickel has a "D" on the reverse above the dome of Monticello. I don't know if you will be able to tell, but on the obverse side of the nickel, the date of the coin says "1943".