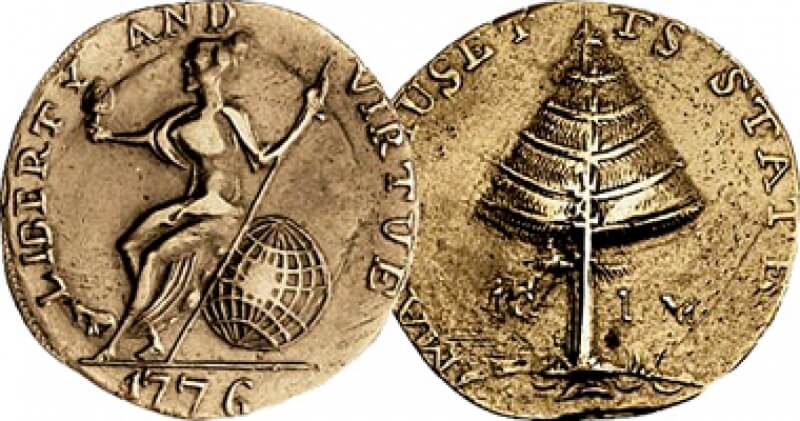 02 Apr 2018
Nothing is known about the origin of the 1776 Massachusetts Copper (Pine Tree Copper)
The obverse has a crude pine tree with "1d LM" at it's base along with the inscription 'MASSACHUSETTS STATE'
The reverse has a woman (probably intended to represent the Goddess of Liberty) seated atop a globe holding a liberty cap and staff. A dog also sits at her feet.
A legend reading 'Liberty and Virtue' surrounds Lady Liberty.
The 1776 Massachusetts Pine Tree copper penny was unearthed during an excavation in Boston's North End in the early 19th century.
Paul Revere has been credited as the designer and engraved of the Massachusetts Pine Tree penny based on stylistic similarities with a unique "Janus Head" half penny, that was discovered with engravings and proofs of Revere's continental currency notes, as well as by comparison of lettering details on the coins with Revere's engraved 1775-1776 currency and securities printing plates. Additional confirmation is in the evidence that the die for the reverse of the penny sank during production- which is a result of Revere's inexperience as a die-maker

Great blog. I love 1700's dated coins although most of mine are world coins. It always makes me wonder who has handled it before me.

It’s very interesting to think about indeed! Thanks for commenting

Enjoy the history associated with coins.

Me too, I think that's what really makes this hobby so great compared to other hobbies! Thanks for reading my blog!

Great blog! I enjoyed reading it. Thanks for your research!

You're welcome. Thanks for reading!

Indeed.! Thanks for reading my blog!

Interesting blog. Thanks for the research and photos..

You're welcome, glad you enjoyed the blog

Interesting. He was a great Silver Smith alot of his spoons forks knives are not real. They found counterfeits. I guess there all over. I liked the blog and the information about the coin. Thanks keep it up Mike.

Yeah I'm not sure why Paul Revere's work was counterfeited so much. Thanks for taking the time to read my blog