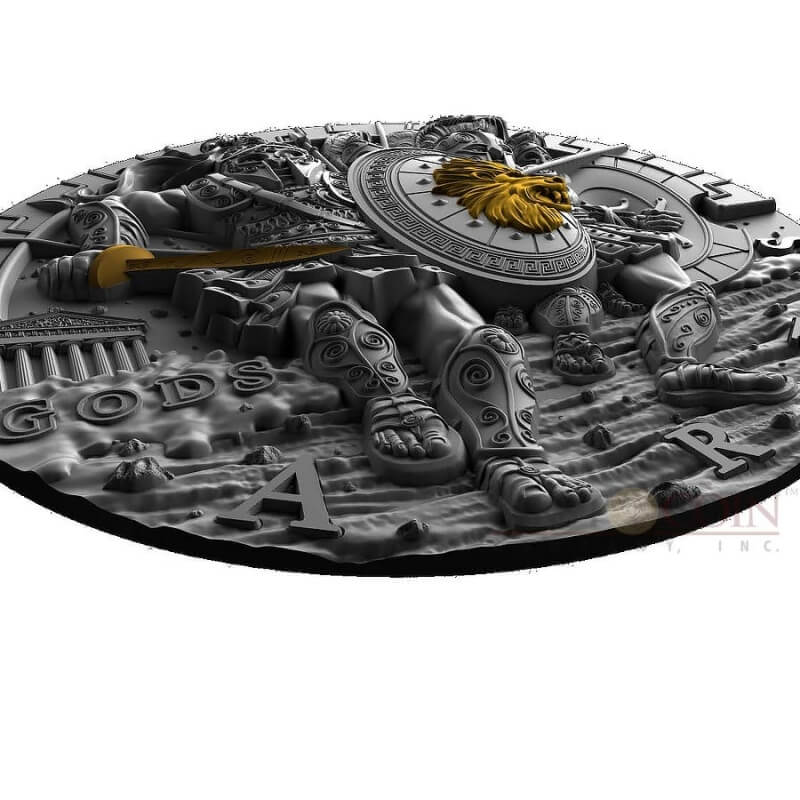 16 Mar 2017
Thousands of years ago the Greeks and Romans feared the gods and goddesses they created. Classical Greek art portrays these deities as powerful beings that are to be respected and worshiped. This coin perfectly honors the Greek god Ares and the power he was believed to possess; the scene on the reverse shows a battle with Ares, fully armored, at the forefront charging, seemingly right off the coin. He brandishes a sword and a shield which has a roaring lion, a symbol of strength and courage.  Behind Ares looms a Greek temple, and an army of men loyally following him to war.
The image is reminiscent of the artistry of ancient Greece; with intricate details that rise high off the field, this piece is a true tribute to the history and culture of that ancient Mediterranean civilization.
I have always found high relief coins to be the most stunning when preserved well. The level of detail that is put into their creation is amazing. Whether it be flowing hair lines, complex structures or well defined figures, you have to respect the die engraver with the skill  to create such beautiful work.
This coin was struck by the Polish mint for Niue Island, located in the Pacific. It is the first coin of a new GODS series  and is sure to be popular.
With a price tag over $200  this coin may not be within everyone's budget, but I know I will be following this series closely simply to admire the craftsmanship behind it, and to the 500 people lucky enough to own one of these pieces, I say congratulations.
I know an article on this was just done in the most recent issue of "The Numismatist" but as soon as I saw this coin I was in awe and had to make a post about it.
Happy Collecting

Artistic design is what has been sorely missing from the US Mint for way too long!!!!!!

It's a beautiful medal. Do they make any other ones like that series that are not about mythological "gods"? Please, share a link to the website where you found this one.

They do, this mint puts out a ton of beautifully crafted pieces that cover a few different genres. https://firstcoincompany.com/S/

This is a stunning piece of art. Looks like they are going to walk right off of the coin. The Polish mint has really put out some nice stuff.

Wow. The photograph really accents the blog nicely, too. How did they do that? Amazing the way the relief was caught on camera so spectacularly.

Thanks for the information. It was very nice of you to look it up. Mike

This is really cool! Too expensive for what it is though. You could buy "real" coinage for that.

Hey again guys, so I can't find who the designer and engraver were for this coin, but as for the metal; its 2 oz of .999 fine silver with an antique finish, and gold plating on the sword and the lions head on the shield. The obverse with a typical bust of Elizabeth II with dome Greek style swirls along the border. The legend says NIUE ISLAND 2017 ELIZABETH II TWO DOLLARS.

Pretty cool coin. Too much money for me. Thanks!

I have to agree with the coin lady. Would like to know more about it. The designer what type of metal I know the island has its own mint and sells many coins. Thanks for the picture. It's something that I like but won't be collecting . Thanks again.

That is really something. Wonder who designer/sculptor was?

very cool and interesting thanks for the blog