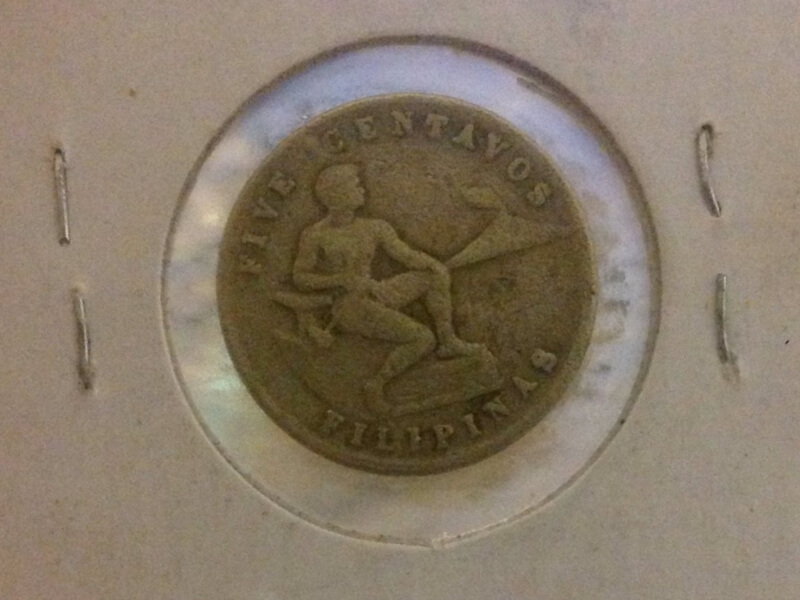 28 Feb 2015
Okay I know I have not done one in a while but here we go!. A five centavos (S) from the Philipines issued by the United States(1937-1945). The obverse was designed by Melecio Figueroa and features an adolescent male native seated at an anvil and holding a hammer in his right hand. In the background is the Mayon volcano, with billowing smoke coming from the crater, located on the main island of Luzon. Also denomation plus the Spanish name for the country (now then US territory). The reverse design features an eagle perched atop a shield with a banner below it which is inscribed "COMMONWEALTH OF THE PHILIPPINES." On the outer periphery are the words "UNITED STATES OF AMERICA" and the year of issue. To the left of the year is the mint mark "S" for San Francisco. The reason it was stamped in San Franciso because when the United States took back the Philipines from the Empire of Japan they brought coins to the territory in 1944 and continued into 1945 because the minting plant was heavily damaged in liberation movement, though Manila reopened in 1945 San Franciso countiued to keep the economy up. This was last year because in 1946 they gained independence and that was that. Hope you enjoy. I will add to both my American and soon Pacific Collection.

Wonderful story. It is always great to read about the history of coins.

Thats pretty cool. I always find it interesting that the U. S. Mint stuck coins for other countries

I like the early 1900 Philapine coins. Still have a box laying around. Will do a 5 Centavo set as a compliment to my complete run (1866-date) of US 5 Cent Nickel coins.

Beautiful coin. I've always like the coins and history of the Philippines! Thanks for sharing!