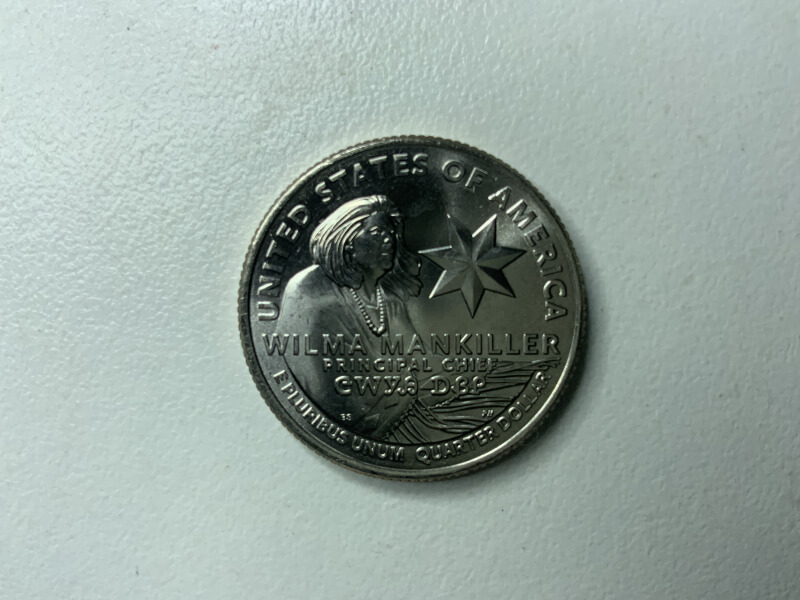 At my coin club meeting last week, I got a bag of 100 Canadian cents and to my surprise many were dates I already had. I also bought a 1932-D Washington quarter key date in G-6 for $35, and bought the new Wilma Mankiller quarter which inspired me to write this detailed blog on the American Women Quarter Program!

The Circulating Collectible Coins Redesign Act of 2020 authorized the program. Originally, it was proposed that there would be a 56 coin series honoring a woman from each state and territory, but the upcoming United States Semiquincentennial in 2026 would conflict with that since they were going to have a special reverse design for it. Making the series shorter was the logical thing to do so they changed it to a four year series honoring pioneering women that have made major contributions to the United States and have made big accomplishments in civil rights, abolition, suffrage, government, science, arts, and many more.

Not only did they want to add Historic Women on these new quarters, they also wanted a new obverse bust of Washington, since John Flannagan's design had been persisted for 89 years. Many new designs were made for the new Washington but there was one that was very old. That was Laura Gardin Fraser's Washington design. Laura Gardin Fraser is debatably one of the most known U.S. coin designers. Her coin designs include the 1921 Alabama Centennial half dollar, the 1922 Grant Memorial half dollar and five dollar gold piece, and many more notable designs.

In 1932, the Washington Bicentennial committee had a competition for the new Washington quarters obverse design. Many designs were submitted but in the end, Laura Gardin Frasers design won. They sent the design to the treasury where the current Treasury Secretary Andrew W. Mellon disagreed with it and said that the treasury never approved the design. He held his own competition and personally selected John Flanagan's design. Laura Gardin Fraser was stripped of her design, although it was later used for the obverse of the 1999 $5 Gold George Washington Death Bicentennial coin, which was issued thirty years after her death. Although, her legacy lives on because her design won the design contest in 2022 and you can now find her new obverse design on circulating 2022 coins.

Maya Angelou is a famous writer, poet, social activist, and teacher. One of her most famous works was an autobiography called I Know Why the Caged Birds Sing. A book that tells about her life which made her known internationally. She was a big activist during the Civil Rights Movement and worked with very famous activists like Martin Luther King Jr. and Malcom X. She also made a poem titled "On the Pulse of Morning", which she recited at U.S. President Bill Cliton's inauguration in 1993.

Sally Ride was an astronaut, physicist, and educator. In 1983, she flew on the Space Shuttle Challenger on the STS-7 mission, making her the first American woman to go to space. In 1984, she flew to space again on the STS-41-G mission, also aboard the Challenger. After her death, she was inducted in the National Women's Hall of Fame.

Wilma Mankiller was a Native American from the Cherokee Nation who was an activist, social worker, and a leader. She was the first woman to serve as Principal Chief of the Cherokee Nation. In the 1960's Mankiller was very inspired by the social movements, she decide to become involved in the Occupation of Alcatraz which was an over a year long protest when Native Americans protested on Alcatraz because they thought it qualified to be reclaimed by the Indians. She became an advocate to improve the image of Native Americans.

Nina Otero-Warren was a women suffragist, educator, and politician. She became one of New Mexico's first female government officials with the job as Santa Fe Superintendent for Instruction. Otero-Warren was also the first Latina to run for Congress and she ran for a seat in the U.S. House of Reps. as the Republican candidate for NM. After she died in 1965 the Otero Elementary School was made.

Anna May Wong was an Actress and was the first Chinese-American Hollywood movie star. She was featured in many famous movies including Shanghai Express and Daughter of the Dragon and was known internationally. During World War II she devoted her time and money to help the Chinese against Japan. She is considered one of the best actresses of her time.

The Future of the Program

The program will continue with designs in 2023 with Bessie Coleman, an African-American pilot, Jovita Idar, a Mexican-American suffragist, Edith Kanaka'ole, an indigenous Hawaiian teacher and dancer, Eleanor Roosevelt, First Lady and advocate, and finally Maria Tallcheif, a Native American Ballerina. So we will have much to look forward to.

Itâ€™s all about history, with progression, yet keeping tradition. Really nice work!

Nice Quarter! I always enjoy your blogs. They are so well written and interesting! Great photos too... ; )

I really like this year's coins, and I'm already looking forward to next year. I am also glad that LGF's Washington design is used on the obverse. No longer is Laura Gardin Fraser relegated to "commemoratives only." She has taken her place next to her husband as a designer of business strike circulating coins.

I am with Mike on this. LGF did deserve the quarter obverse in 1932 and this use of her design for this series of quarters was genius.

Laura Garden Frasier finally got the recognition she deserves. One of the mints great engravers and sculpture. Thanks for mentioning her. Good buy with those Canadian Penny's. Lots of luck as usual a great blog. I enjoy reading them. I did not collect the Fifty woman quarters. One the clad graded very low. The silver of course grades better. And at my age I'm not collecting long term sets like ten years or more. Thanks again!!

Thank you for another wonderful blog. you write so well!

Great buy on the quarter. Nice, well thought out blog CC. Thanks.

Nice price on that 1932! Bought mine graded, but cleaned.

What grade was it?

Excellent blog. Thanks for sharing it with us. Loved the American Women Quarters Program Set. What's up with the Maple Leaf coins? Lots of them... take care. Good luck.

Yeah, I said that at the beginning of the blogâ€¦

In the blog he says he got a bag of 100 maple leaf cents at his coin club meeting ...

Personally enjoying the American women quarters series. Both the new but old designed obverse, and the individual women recognized on the reverse has not only grabbed my attention as a collector but the attention of my daughters. And I got them their own Whitman blue folder just for this series of quarters. Thanks for sharing the info Cheerio. And the 1932-D is a nice addition as well.

Yeah! The obverse celebrates women too in a way.