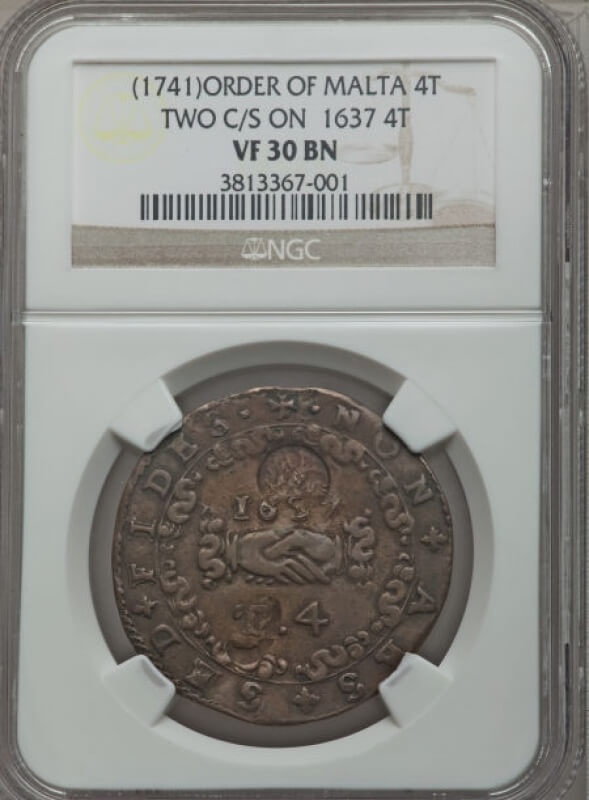 Another one of my favorite coins.

Coinage of the Knights in Malta

Through the intercession of Pope Clement VII, the Order, in spite of strong insistence by the Master of the Mint at Messina to deny it the right of mintage, obtained the privilege of striking coins in Malta. The first coins which appear to have been minted in Malta by the Knights were struck during the brief reign of the second Grand Master, Pietro del Ponte (1534-35). The Order of St John minted coins in gold, silver and copper during its 268-year rule in Malta.

After their arrival on the Island the monetary system was adapted to that of Sicily. In 1609, the Council of the Order also appointed a Commission to study the new regulations issued for the Sicilian Mint at Messina to ensure that coins struck in Malta would in future conform in weight and fineness to those of Sicily. From time to time foreign coins, including Spanish Doubloons and Piastres, Venetian Zecchini, Livournine, Genovine and Louis d’Or were allowed to circulate with the local coinage.

Because of the critical financial difficulties following Malta’s Great Siege of the Turks against the Knights in 1565, and to have funds to pay the several thousand labourers engaged in the building of the new city of Valletta, the Order found it expedient to strike fiduciary copper coins. The reverse side of these coins depicted clasped hands surrounded by the legend ‘NON AES SED FIDES’, (Not Money But Trust). According to Giacomo Bosio, historian of the Order, Grand Master Jean de La Vallete (1557-1568) promised to redeem these copper coins in “noble, metal” and also fixed their rate of exchange at par not only with Maltese silver coins but also with Sicilian silver pieces

Fiduciary copper coins, struck by other Grand Masters continued to pass current in Malta at par with Sicilian silver and to maintain their value with local silver coins until the death of Grand Master Antoine de Paule in 1636 as the amount put in circulation had remained more or less proportionate to the internal needs of the Island. But when Grand Master Jean-Paul Lascaris Castellar (1636-1657) struck these fiduciary pieces in excessive quantities, the rate of exchange between copper and silver was completely unbalanced and increased rapidly from year to year to such an extent that in 1764 local copper was reported to be losing the amount of 107% in exchange for silver.

The Knights’ minting art reached its peak in the gold and silver coins issued during the office of Grand Master Antonio Manoel de Vilhena (1722-1736).

Vilhena was the first to coin the 12 Zecchini gold piece, the highest denomination in the Order’s coinage. He also introduced the silver 2 Scudi and the 8 and 12 Tari pieces.

The highest value silver coin minted by the Order was the Maltese dollar, known as the “pezza”, “oncia d’argento” or “uqija” This was first issued during the long reign of Grand Master Emmanuel Pinto (1741 – 1773).
The Order of Malta is still active world wide including a large presence in the United States. There are many books available on the Knights of Malta including "The Great Siege: Malta 1565" by Ernie Bradford.

Incredible article and coin! Thanks!!

Wonderful article. Very insightful on the history of a coin and its origins. Thanks for sharing!

Impressive, thanks! I always love your articles.