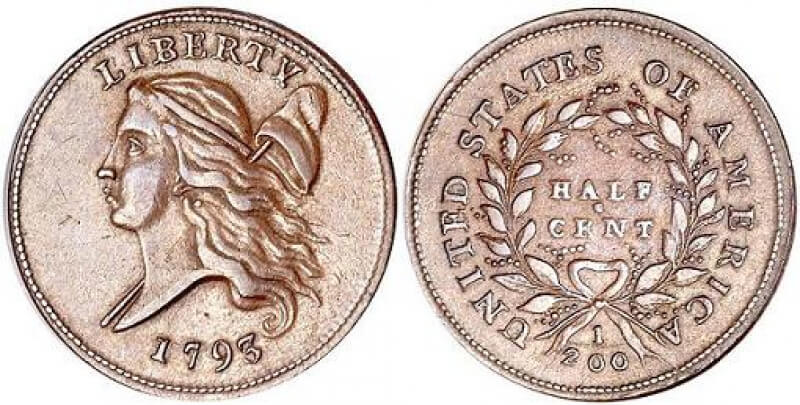 The year 1793 was a tough year for Philadelphia.  The mint was closed for the greater part of the summer this is a reason for the 1793 cents rarity.  It all started in August of 1793 before it had started many doctors had not seen any changes in their patients health.  But with the arrival of the Santo Domingo, AMELIA, SANS CILLOTE, FLORA  and many other ships that had come from harbors and ports infected with the dreaded yellow fever.  August 7, the Mary arrived into the harbor its captain sailed to shore with symptoms of yellow fever.  Before long people everywhere near the docks were either sick or staying inside many of the streets had been deserted.  August 7, a young daughter of Dr. Hodge died of yellow fever known to them as "Bilious fever."  The cases were rising with extreme rapidity in Philadelphia.    A notable  physician  through the yellow fever was Dr. Benjamin Rush.  This man worked so hard through the fever that he would attend close to a hundred cases a day.  Later he was criticized.  Every time a yellow fever pandemic broke out the mint would close.  That is why most coins from the 1700s are very rare.  Yellow fever deaths at the mint were:  Joseph Wright the chief engraver his wife, Jonathan D. Sargeant who was the son in law of Rittenhouse.  August 26, the government finally took over the situation they said "all unnecessary contact with infected persons should be avoided" also the houses with sick people inside would be marked.  Dr. Benjamin Rush was also infected by yellow fever but by his own method of bleeding  himself he soon was well and was later established as the treasurer of the United States Mint.  The yellow fever of 1793 was an awful ordeal it lasted from August 16, to November 14.  1793 was the year of the large cent and half cent.  Two different reverses were used and only one obverse.  No.1 reverse had a chain with 15 links in it representing the 15 states of the U.S.A.  This design was discarded because many people thought the chain symbolized slavery.  So it was changed to a wreath which would be No. 2.  Three distinct varieties exist the first AMERI in legend, AMERICA with periods, and AMERICA without periods.  The wreath cent has different edges there is the Vine and Bars edge, and the Lettered edge.  The leaf under the depiction of liberty also changes there is the ultra rare strawberry leaf with only about 4 specimens known to exist.  The 1793 half cent had no big differences throughout the year it was basically the same design.  During the 1793 pandemic the mint had trouble minting coins but they still made a couple of coins for Numismatists to enjoy.

Cool blog! Very interesting subject. Thanks for your research! ; )

Thanks for the source list. Consider adding that to your blogs. It makes it nice.

Nicely written blog. I would like to look up more info on this. Any chance of a source list? Thanks.

sure I got quite a bit of this information from United States Large Cents 1793-1857, some from a guide book of United States Type coins and that is about it.

Sounds a lot like what we are dealing with. I really do hope I can pickup a 1793 half cent and large cent in the future, they are so incredible! (not the design as much, more like the history) Thanks for the blog, stay safe!

Well written and researched. Just curious, in arriving at the subject did that come from the current situation? Why I ask is that there are similarities in the two. Yellow fever shortened production in 1793 and 1838 at New Orleans, COVID reduced production at West Point with the American Silver Eagles. I see they now have 2021 "Emergency Eagles" from San Francisco.

A great coin and a history lesson. Great job making the coin come to life. Why is the hat on the pole? Mr. B

Scarey time ! Wonder if today yellow fever would be an issue, or modern medicine would be fine to deal with it? Would like a wreath cent. Thanks

Lots of interesting info here. I knew some of the story but not in that detail, so I really enjoyed this blog

Nice history! Thanks for sharing!

I don't quite own these coins but I really whish I did. thanks

I do love the chain cent design. They have some AMAZING history behind them... If you own those coins, you must be a proud owner! The well-known controversy about the Flowing Hair Cent is one of the most interesting things to study about 1700 coinage. Thanks for sharing!