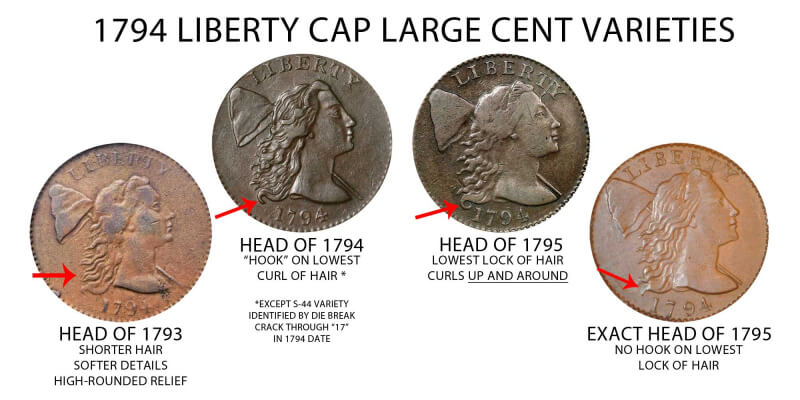 Hello everyone.  Today's paper is about the large cent.  Like all of you probably know I enjoy Large Cents.  This paper is going to be about the Liberty Cap Large cent, The Draped Bust large cent and the Coronet head large cent.Liberty Cap Large CentThis large cent depicts a lady liberty facing right with the LIBERTY above her head.  The cent was made from 1793 to 1796.   The reverse has a wreath like every large cent does.  The wreath encircles ONE CENT and around the wreath is UNITED STATES OF AMERICA.  Liberty Cap large cents were supposedly designed by Joseph Wright, but it could have been Henry Voigt.  The odds are that Joseph Wright designed this coin because the Liberty Cap head facing left was also designed by  Joseph Wright.  Joseph Wright was born in 1756 and died in 1793.  George Washington choose this man to become the Chief Engraver of the United States Mint.  Joseph was probably picked because he had a background of sculpting things.  He and his mother had been wax sculptures before his appointment to Chief Engraver.  Sadly Joseph died before he was able to become the Engraver.  The coins he designed were modeled after the Libertas Medal.  The Liberty Cap Large Cent was still not very successful but it lasted longer than the Flowing Hair Large cents.
Draped Bust large centAfter the disappointment of the Liberty Cap large cent a new design was put into the minting machines.  The Draped Bust large cent was produced from 1796-1807.  The draped bust design came about by Robert Scot.  He had been picked by the new president Thomas Jefferson to be the Chief Engraver at the mint.   During president Jefferson's term he was told by Robert Scot that all the coins needed to be redesigned.  They needed to be redesigned because Robert Scot felt that they should reflect the Democratic government.  The coin's design has a bust of liberty wearing a drapery and she has a ribbon in her hair.  The classic LIBERTY is above her head and the date resides below the bust. The reverse has a olive wreath around ONE CENT and UNITED STATES OF AMERICA is wrapped around the wreath.  the fraction one hundreth is at the bottom of the coin.  The draped bust coins aren't very common but they were put just about all the different denominations.
Coronet large centsThe next coin would be the Classic or Turban head large cent but I already have a blog post on that coins so if you want to learn about it just go check it out. The Coronet large cent had two different designs. Design 1 is called the Matron Head.  Design 2 is known as the braided hair design.  These two designs are almost the same but I would say that liberty is more stocky on design 1 than on design 2.  The hair cords also change but it doesn't really matter to know how to tell them apart. The whole series has by far the longest mintage they were made from 1816-1857.  The obverse design has yet another depiction of Liberty surprisingly though they didn't put LIBERTY over her head they replaced LIBERTY with 13 to 15 stars.  Robert Scot designed the Matron head, the braided hair happened when Christian Gobrecht tweaked some of the designs.  The Coronet large cent is the most common large cent you can find.
Type SetTo sum up all of the above information and from my other blogs.  The flowing hair large cent with chain design was only made in 1793.  The flowing hair large cent with a wreath was also only made into 1793.   The Liberty Cap large cent was made from 1793-1796. The draped bust large cents were minted from 1796-1807.  The Classic head Large cent was made from 1808-1814. The finally the coronet which was minted from 1816-1857.  Hope you learned something and have a nice rest of the day.

Wow. I cannot imaging having a set of these let alone a single large cent in better than fine condition.

Enjoyed it very much thanks for the work and info. You did well

I gotta say that knowing the difference between varieties is very important. I enjoyed your blog and learned from you. Nice photos as well. What is a wax sculptor? Thanks.

I really love the large Pennies from Great Britain and some of its commonwealth partners. Recently picked up some Large Pennies from Australia and New Zealand. I enjoyed your article, you show your passion.

Nice blog! These are pretty cool! I have a few in my collection. ; )

Very nice information. I never got into large cents, but enjoy seeing them on display. Thanks

Large cent never won my attention. They do make an interesting study.

Very nice blog! I would have to challenge the notion that knowing two varieties of a and their differences isn't important. I think if you want to be an authority about a particular coin, you need to know these things. I enjoyed the blog.