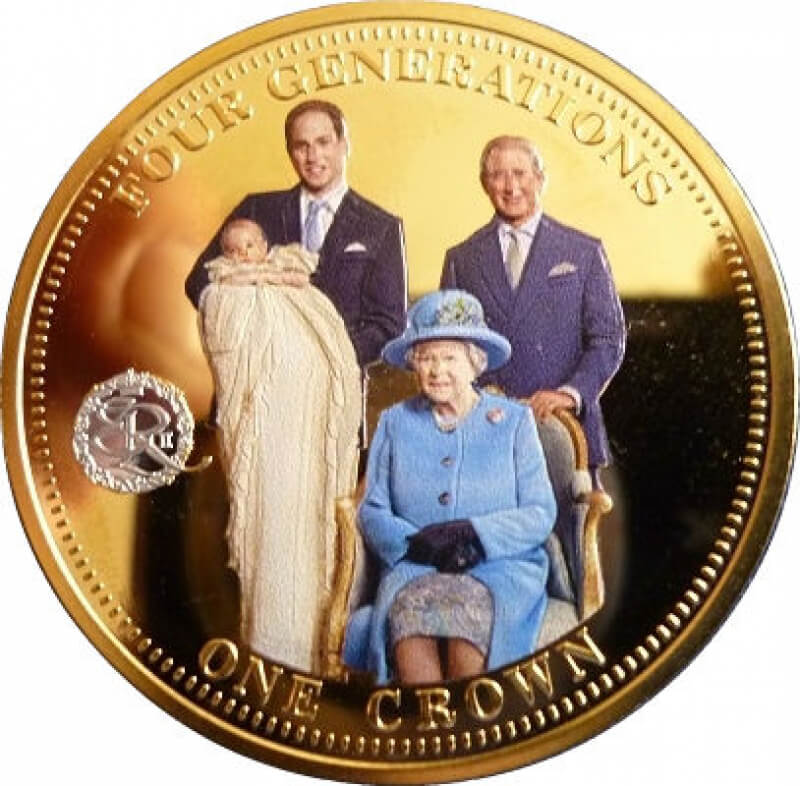 In my forty-five plus years of collecting I have been witness to many trends in the coin market.  The most common of these has been colorized and plated coinage, of which all but a few were created by non-government minting facilities. Many of these were, and still are,  simply legal tender coinage colorized or plated over. As such, these trends have risen and fallen over those years. The greatest trend currently is ruthenium.  Admittedly, I find some of these interesting and worthy of collecting.  A high percentage of collectors, particularly us seasoned or those with deep pockets, shun them as being nothing short of a novelty.  Rightfully so when discussing a patriotic themed Peace Dollar or a ruthenium and rose gold Walking Liberty half dollar. While these types of "coins" have existed for years, world mints have slowly introduced their own. Which is the subject of this week's blog.  A topic which arose following an explosion of posts and comments on the forums with the release of the 2020 U.S. Mint Basketball Hall of Fame Commemorative.       Enjoy!

Following countless hours of research over the previous week it has proved difficult to say the least finding the origin of an officially minted colorized/plated coin.  While Canada released holographic Maple Leafs in the nineteen-eighties, and Australia appears to have the most, the results are inconclusive and speculative to say the least.  None the less, government mints are producing these in greater numbers. Despite these being non-circulated, collector only offerings it has become abundantly clear that a change in coinage as we are accustom to is changing. While none of the current issues could ever be applied to a circulation struck coin, the technology to ensure such a method in the near future is far from out of the question.

From a collector's stand point, the sales figures can not be denied as to collectibility.  Australia (Perth Mint)- 2010 50 cent Sea Life Series, three coins each with a 10,000 mintage limit sold out.  2010 1 ounce Silver Coloured Lunar Series with a mintage of 70,000 sold 57,920. Several series in the coming years with mintages of 20,000 or higher have declared sales figure of 65% or greater of the total mintage.  Most of those with a mintage of 8,000 or less were sell-outs.  A surprising find comes from Canada. In 2017, the Canada 150 2-Dollar Dance of the Spirits glow-in the dark (pictured) reached a whopping 10,000,000 mintage. While an exact final figure is pending, the production numbers indicate how popular non-traditional coinage is becoming.  Keep in mind, that mintage is separate from the standard issue.  In Great Britain, the prestigious London Mint has released a first ever 2020 photographic series in gold and platinum plated.  Of importance, until recently, third party graders are now encapsulating colorized coinage.

Which ever side of the fence you may be on where non-traditional coinage applies, the very subject it's self should and must be considered. To collect them or not is another. Yet despite the existence of technology, until the cost becomes addressed business strikes will remain out of the question. But not an impossibility.

After receiving an item from the Royal Canadian Mint I had forgotten I had ordered, I must hereby officially eat my words about "Lipstick on a pig". Long Beard my set is sweet, the colored coin is just something to look at. I am proud to have it with my collection. I don't think I will become a big fan of these coins, but darn, this one sure is nice. Thanks again for the info you always provide. Later!

Cool story. I bought a Nuie Island, Ares God Of War, very high relief, a few years ago. Minted by the Polish Mint. I thought its coolness factor was off the charts. Won`t buy any more but had to have this one. Regards Doug

I find myself drawn to some of these. There are so many innovative designs coming out that there is bound to be something for everyone. I really like the Australia coin you have pictured. I haven't priced one recently but they had been pretty pricey. My only personal rule is that it can't be something altered outside of the mint that made it.

It is great you did research for this blog. I enjoyed your passion for the hobby.

the Canadians seem to have perfected the art of colorizing coins, I have a few but they keep coming up with new impressive stuff, it's hard to resist. LOL

There is a lot of stuff out there these days. I might get interested in colorized coins if the subject is interesting to me and the mintage low. I think most of the colorized material is just novelty items for specific people. They do make great gifts . I supposed you could start a collection dedicated strictly to colorized coins like this. It would probably be a great looking collection.

I learned early. My mentor said collect what you like. That's a great statement. That means your collection will be coins you like. You researched did the history. They want to change this coin and that coin. Now they want color. Stamps have color. Some like color coins. I dont. This basket ball was a test. The prices are so high. They will come down. They can't be used in circulation. Color will go fast. They can make all the color coins they want. But I will not be a part of it. That silver dollar from the mint with just the rim colored red was 95.00. For a streak of red. Collect what you want and what will bring you value years from now. Thanks for your blog.

Lipstick on a Pig! I'm just saying! Although I do know some that love em, and even I think some look nice. That is what is great about this hobby, everyone has their likes and dislikes. My advice is "Buy what you like". There, Nuff Said. Good informative Blog. Thanks.

It is incredible to me what the Canadian mint can create. Such interesting designs that look nothing like a coin should.

Well as many here say, we collect what we like. I'm not interested in them. I understand that people do collect them, but I most often will want a very high grade business strike, though I do acquire proofs from time to time. I think the colorized and jeweled coins are novelties, but they appeal to some people and that's fine. Having said that, I have to add that I hope they don't come to business strikes or the proofs that are derived from them. Thanks for an interesting and thought provoking article

I have seen colored 2009 cents and state quarters. Great blog!