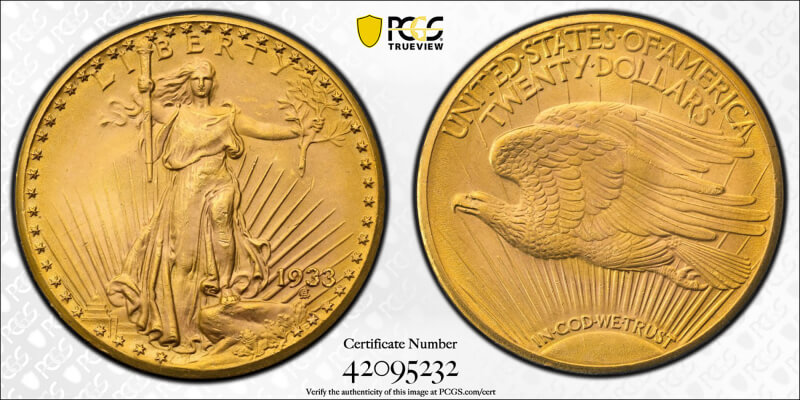 With the Sotheby's  June auction selling of the 1933 Saint-Gaudens Double Eagle making news, as a direct result the subject of ownership and the fate of those few remaining specimens once again rises for debate in the publications and many forums.  While not a new subject by any stretch, having been discussed going back to sometime shortly after 1933, with the United States government legalizing a single example in 1996 has without doubt been the most celebrated and discussed coin.  For ever linked with it is President Franklin D. Roosevelt's  Executive Order 1602.  What's interesting on the subject, nearly all are mere highlights of the Executive Order rather than an examination.  As you have most likely thought, this is the subject of the week. Not only the actions taken by President Roosevelt, but what lead up to it and the effects it has created on all coinage dated after 1935.           Enjoy!

Paper currency and script have coexisted with coin of precious metals long before the United States Mint struck it's first coin in 1792.  However, the earlier forms were printed not as circulating currency, rather as interest bearing promissory notes. As the country grew it was evident that not enough currency existed to satisfy the demand of commerce. By the 1830's this gave rise to bank notes being issued locally whereby a bank had sufficient gold and silver to back each.  This event is highly probable to be a precursor to this to come.  In times of hardship, as the public withdrew their hard currency from a bank each note lost value accordingly. As a result,  many banks began failing especially in the mid to late 1960's.  In an attempt to solve the matter, Congress passed the Act of July 17, 1861 thereby ending species payments and authorizing the Treasury to print currency. These new U.S. notes, known as Demand Notes, were to simple be accepted by the public based purely on the faith that they held value and could not be exchanged in gold or silver.  As the war progressed and costing greatly, once more Congress acted passing the National Banking Act in 1863. First, this encourage private banks to apply for a charter as a national bank. In doing so, the national banks used their funds to buy Union Bonds and could issue up to 90% of their deposit held at the Treasury in D.C.. This gave the government cash and the banks a perceived respect and trust of the public.  While confidence was growing in paper currency, the western expansion rose faster.  Since the vast majority had not, in 1865 the United States issued it's first gold certificate.  Each of these notes were payable on demand in physical gold. After all, who was willing to travel  a great distance carrying their life savings in coin?


The first shock wave of things to come in the world financial markets occurred with the Panic of 1907.  In October of that year, two major entities on the New York Stock Market failed.  In turn, this triggered a six week run on the banks from New York to San Francisco.  With U.S. gold deposits  taking a massive hit, J.P. Morgan took it upon himself to stabilize the financial system.  After all, he was losing money as well.  In a previous panic in 1893 he lent the government 60 million dollars under similar circumstances, however this time he would resolve things differently. He assembled all of the leading bankers and financial experts to his home where they were more or less ordered to move money from the stronger institution to the weaker. This move on his part eventually stabilized the market.  But the damage had been done as public faith turned on the bankers.  With public distrust in both the government and now the wealthy few, the former saw opportunity. Political pressure shifted to enact legislation and regulation of the country's finances. None more so than newly elected Woodrow Wilson, who on December 23, 1913 pushed Congress to pass banking and currency reform in creating of the Federal Reserve.  The United States had been the final major country to establish a centralized banking system since Europe had already done so.  With the President appointing all Reserve board members and the Treasury free of the old restrictions backing notes, these new Federal Reserve notes were backed on commercial credit with a 40% minimum in gold.  It also established the discount rate, the amount of interest by one bank lending to another member institution. This was done to encourage private banks to nationalize.  By stripping the power from the banker, in the public's mind,  confidence in the government soared.  Consumer borrowing and spending exploded as fast as the money was printed.  For the banker it was a Godsend since if the a borrower defaulted on the loan paper was far cheaper to replace than gold.  Second, physical metals are non-interest bearing whereas the Federal Reserve are.  Yet the government failed to learn, not once but multiple times. Notes were still printed and backed in gold or silver.

The Great Depression is, and will always be, largely misunderstood. To be certain the stock markets had crashed.  It was simply a repeat of 1907. Only this time it was a contraction of the very credit upon which currency was backed.  Just as then, a public run on the banks began, faith and trust eroding rapidly. By 1933 the estimated total of gold reserves in the United States was 6,000 metric tons. The estimated total of gold bearing notes printed and still in circulation were valued at 16,000 metric tons.  Those familiar with Rick Tomaska may recall his repeated statement "the great European Bank Hoard".  That line is not a lie, but a partial truth.  Initially, the public's run on the banks could have delayed the inevitable.  It was the nations of Europe who held vast quantities of U.S. bonds and notes now being redeemed as the crash spread overseas.  In a swift move, Executive Order 1602 not only returned privately held gold back to the government to fulfill it's obligations to allied nations,  it also raised the standardized gold spot value from $20.67 to $35.00 per ounce.

So how does this affect all coinage dated after 1935?  Following the passage of the Executive Order, an even more distrustful public turned to silver.  Sensing as much, President Roosevelt's first course of action was to cease production of silver dollars. The second came in 1934 imposing a tax of 50% of any profit made in the transfer of notes. As the value of silver as a commodity rose above it's face value, the last silver certificates were issued in 1964. Coinage containing the metal struck for circulation followed the next year. So imagine had Congress not passed legislation on the dollar in 1935. We may have had Peace dollars up to 1964.

The 1933 Saint-Gaudens image is courtesy of PCGS Coin Facts.

I saw your peace dollar ... Seek for mysteries in her hair locks ... Look look look well ... The surprise is in...

Amazing blog! Thanks for all this information and history! Crazy times indeed ; )

Amazing history back then. Hopefully we are not headed for another monetary disaster? Nice information and blog.

Great blog. What we have come to enjoy from you. Ahhh Peace Dollars till 1964. More for me to collect and VAM search. Heaven. Thanks for the explanation of a very complicated, government, issue.

Another winner. I learned about this with the Hard Times tokens. Andrew Jackson was the most controversial President we had. When he Vetoed the National bank the worse was about to come. He was made fun of on one of these tokens.. I saw it in the Erik Newman collection at auction and picked it up. It says everything the way they portrayed him. Excellent blog . The history and research are great. Not a pun but right on the money. What happened everyone new would 1907. Thanks for the great history lesson on our coinage and notes.