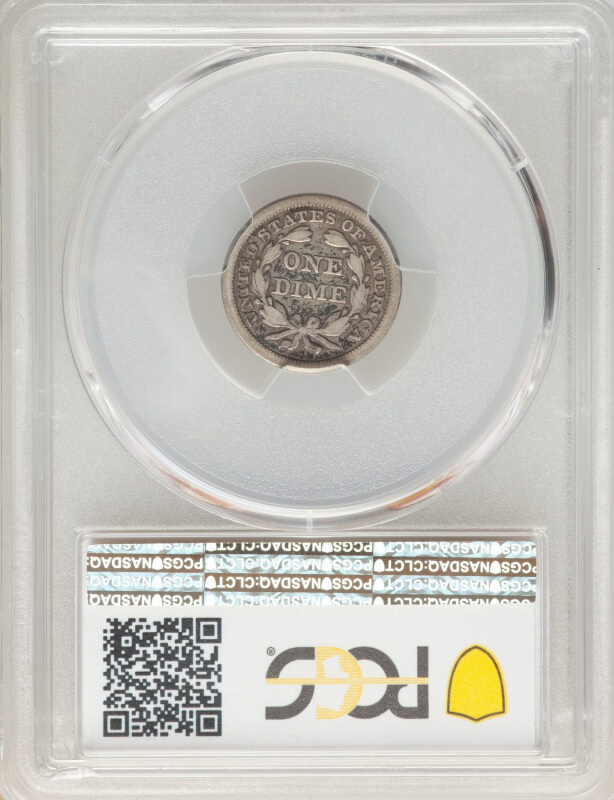 Surly the title of this weeks blog caught your attention, with an impression that the subject derives from the authors arrogance, as if somehow claiming to be an expert numismatist.  None of which are true, in fact about as far from it as one could get. As you read on the title fits the subject perfectly. Since becoming a new ANA member the first of this year I realized that my weekly blog posts have covered many topics on as many subjects without any on my own personal collection.  Dimes. For an unknown and unexplainable reason the denomination has drawn my attention over many years.  The "Hoard" as I call my collection contains every dime by date and mint mark (with exception to varieties and proofs) back to 1895, lacking the tough to find New Orleans exhibiting the "look" I'm after.  While there are other denominations, several complete by series as well, from a collector's view point the dime happens to be where I specialize just as some do so in say, cents.  Currently, I am about one third from completing the Seated Liberty series. An extremely difficult one considering the many, many low mintage key and semi-key dates. Since I am also a working class stiff, the cost of these becomes an added challenge and leaves a few prohibitive unless some how I hit the Powerball. Now back to the blog title. The dime pictured is the average condition in which my series run grades with the goal of an equal eye appeal across the run as possible. Another added challenge. I call you're attention to the date, this weeks subject.         Enjoy!

What makes a coin rare? The very word it's self more often than not becomes miss used, over used or attached to a coin for marketing purposes. Most, collector and non-collector alike, would agree that a  1909 s VDB Lincoln cent, a 1916 d Mercury dime or a 1932 d Washington quarter are rare. At least in higher grades to those of us who collect.  While these popular rarities have low mintages, others exist due to survival figures despite a high mintage total. As a result, value goes hand in hand with rare. The coin in question, the 1844 dime, is a bizarre anomaly which does not quite fit the definition, and frankly, over valued due to such circumstances.  With a total mintage of 72,000 this is relatively low when compared with that of 1846 having a much lower mintage of 31,300.  While both are considered keys to the series, the market average on both are near equal in like grades. On occasion, I have seen a grade higher of the 1846 sell for less than the 1844.  At first glance, going by the numbers, this appears normal and accurate. However, as one who specializes in these may attest, finding an 1844 is much easier than the 1846. In lower grades these become quite frequent. So  why is the opposite not true?

One such reason is the nickname associated with it, known in the collector community as the "Orphan Annie dime".  A coin few understand aside from name. Despite the low mintage, as collecting boomed in the years following it's striking, few desired to add one to their collection. Perhaps the denomination it's self was the reason.  As a result the value was not there for many years to come.  The strange and fascinating search for a not so rare coin arose in the early 1930's in a most peculiar and mysterious fashion. Reminiscent in ways of today's late night coin dealers. A publication columnist and coin collector from Kansas City, Missouri arrived with an idea to stir the collecting community over the low mintage dime.  While his specific reasoning may never be fully explained, Frank C. Ross began buying and hoarding the 1844 Seated Liberty dime in the years leading up to his column in the publication Hobbies. Satisfied that he possessed enough of the available supply, he began writing about how the dime being a rare coin.  As readers of the publication would soon discover, this once plentiful date had somehow now been extremely hard to find. To further elevate the "rare" status, his columns now included stories as to why this was. That large numbers had been melt down in Mexico during the great silver bullion craze around the Civil War (the value of the precious metal had far exceeded face at the time).  That they lie at the bottom of the ocean in a ship wreck,  buried, washed away in a great flood or lost to the Chicago Fire.  Somewhere along the line, the nick name was coined. "Orphan Anne". Note the lack of an "i", which it never had in his column. Where the name comes from is a mystery. Perhaps his wife or daughter?  What ever the case, Orphan Anne dimes were now skyrocketing in value as collectors scoured the marketplace paying astronomical prices at times.

The odd and mysterious story surrounding the 1844 dime continues long after his death.  Although prices have peaked, dropping to more modest levels particularly  with a 2003 Heritage auction selling a lot containing 612 examples, the 1844 Seated Liberty dime is still a highly sought after and prized specimen of the series. The story behind the coin should be a lesson for collectors. When discussing rarity, it is possible in some way to create a rare coin aside from the mintage and survival figures.

Great blog...interesting story! The Mercury Dime has been my passion. Good luck with your collection! ; )

I feel like the old dog! I am certainly learning new things. Thanks again for the great Blog!

Frank C. Ross sounds like quite the guy. Hoarding the coins and then creating a stir about them. Did he sell many at a good profit? I need to read up on this man. Searched EBAY for some. In lower grades the 1844 isn't to expensive. I always wonder how many low mintage coins sit in collections and how many are for sale out at coin dealers and online? You would think these low mintage coins would be very hard to find. Doesn't take many collectors to want something, to remove all the available coins. Should be a coin of the week for ANA members. This week, everyone go out and try and buy a certain coin ! Nice post, was a interesting read. thanks

I had never heard of this story, thank you! I found this to be excellent! I'm surprised with all of the mega-wealthy people out there that they haven't touched numismatics. I'm sure a few half cents are prime suspects that I could imagine.

Very informative LB. I own a few Liberty Seated Dimes but just for type set purposes not to be a seed for any collecting efforts. I do have all the Mercs and silver Rosies and I do love dimes. Thanks for sharing your passion today.

I resemble the remarks that MikeB mentioned. Another GREAT blog by LB! With that being said, does anyone know where I can buy a "TON" of 1970-D quarters? LOL As LB so eloquently put it, all I would need to do then is say "because I say it's rare"! Thanks for posting and educating all of us in this matter buddy, I also learned something today!

Enjoyable blog. The dime has character.

I like dimes. Great blog on these. I own a total of one.1876 CC P.C.G.S. VF 25.. That mint produced 8 coins. I like most of them. With mine it was never value it's only worth about 75. 00. But it means more to me . I only have a few coins from there. But the somehow the dime you wrote about is very popular. Your history taught me some things about these. That's what it's about. So thanks I picked up something today. With blogs like this you can't help but learn. Thank you!