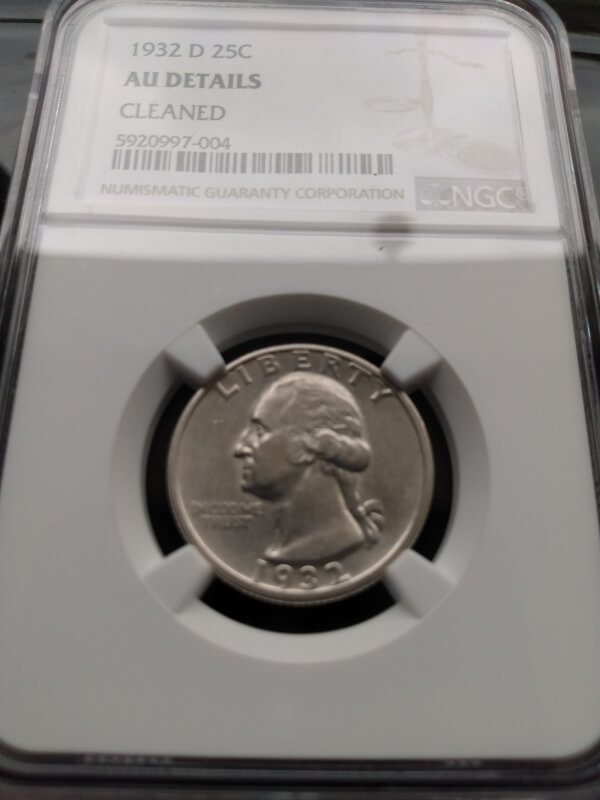 Today I received the final coin needed for the complete Washington Quarter series, 1932 to date,  by mint mark (no varieties) in AU or higher. For those attempting as much,  this is easier said than done on a working class budget.  To the tune upwards of a few thousand dollars, purchased largely in raw form, and several years if not longer.  Satisfaction somehow seems less descriptive as to that feeling when complete.  With that, the subject of this weeks blog holding the very coin referenced decidedly became a good topic to discuss.                  Enjoy!

As one who truly has a passion for all things coinage, belonging to and participating on a few related forums, the very subject appears quite frequently. Most, but not all, originate from new members of the hobby.  Whether a young collector or old, the posed question asked always seems responded to in a mix of answers, some positive  in nature others with reaction of a coin being destroyed once cleaned. And thereby undervalued, or worse, worthless.  To that end a strong argument could be made in certain instance to be definitively contrary. Coins of extreme rarity, for instance, having only a hand full known to survive or have being struck.  But does it stop there?  What about certain key dates within a series?

As evident in the included blog image, the 1932d  is the key date (why beating out the only other, San Francisco issue bearing the lowest mintage total is somewhat baffling) to the series.  Of the 436,800 struck, NGC has certified a total of 4,620- 1178 in AU grades and 1106 in mint-state.  Knowing this and the graded figures, buying an example becomes acceptable of sorts. While the price difference  is sometime substantial, other criteria must be taken into consideration when contemplating the purchase. That in question has a very light satin look only visible when angled in a certain way, under equally certain lighting.  This becomes the familiar "eye appeal" commonly known and referred to within the hobby.  Yet quite a few would still argue against adding such a coin to their collection.  Which is all fine and well. To each their own as is said.  Adding to this, a lager percentage of those individuals state a much greater dissatisfaction for an uncertified specimen despite the same value difference and eye appeal factor.

Which brings into question cleaning and what in really means.  All circulating coinage is cleaned.  That very sentence is one which the author has accepted for many years since unless you personally pulled it from a Federal Reserve wrapped roll someone may have wiped it at a minimum. Which by definition becomes cleaned. An easier way of explain this, take the 1932s Washington quarter which I bought in the raw. Although under magnification it shows no evidence of a cleaning agent, buff marks or wipe marks, how many collectors have had this particular coin over those many years? Was it dipped in acetone? A very common process repeatedly advised, yet again falling under the definition of clean.  What becomes even more contradictory are the grading firms which "conserve" a coin.  So the attempted point being, a coin which has been cleaned is possibly acceptable. So long as it's not detrimental to the original state in which it came.  In conclusion, it appears as though the majority against a cleaned and/or details graded coin are perfectionists.  The author is a coin collector first.

Congratulations! It must look very nice to have the entire set in AU or higher. I always avoid cleaned coins, though when I first started the hobby when I was little I once cleaned my entire collection with vinegar. Like what Longstrider said, what set are you going to focus on now?

I believe also that all circulated coins have been cleaned at one time or another as it was common practice years ago and not frowned upon as it is today. My VF 1916 D Mercury dime was cleaned at one time...there is no evidence of it except for the coin being bright in color. It's not on the PCGS label but was included in the description from the seller. Regardless, I got the coin for half of the VF listed value....which makes me happy.

Congrats on finishing the set. I think your 32D is beautiful regardless of the label. I also agree that technically every coin has been cleaned in some manner, I guess it's just a matter of degree.

Longstrider and I were talking about this. So many older coins have been cleaned, maybe the majority of them. I was looking at a double die capped bust half dollar. The reverse had etching on it. It went low, like for 310.00. I went back and forth but decided I didn't want to buy this problem coin. But that was probably one of a kind. At another time I probably would have bought it. Btw way... Never clean a coin!!! (Paying PCGS to do it isn't cleaning.....)

Congratulations on completing the set! That's exciting! I don't have a problem with a "Cleaned" coin, especially if it's a high end $$$ coin that you need or want for your collection.

Congradulations on finishing the set. That's something you will remember. I bought four coins from Skyline. I should of known . They don't sell slabed. And every coin says brilliant Uncirirculaded. All four were cleaned and had details. They have a whole page of disclaimers. They do not accept returns. Well they took mine back except one. To remind me never buy there again. They did send the other three back. One store by me. He sells more cleaner than coins. .I had a token NGC said something was on it. They could remove it. They did it was graded it didn't say cleaned by NGC. MS 63. . That was the only time i got stuck like that!.Again nice going on the set.!!

Congratulations on the complete set in AU or better. The 32 D looks nice. I wonder if a cleaned coin could become problem free if you handle it for a while? Might be a lesser grade, but could handling remove the cleaned aspect?

Funny you mention that. I have several Mercury dimes that I know were cartwheel bu, until put in pvc-flips which reduced them to a white haze. That's what this Washington looks like. Cleaned or improperly stored?

I think details-cleaned is over used. There are different ways of cleaning tat do not harm coins.

I personally feel that a coin that is cleaned/details is a good way to get into a coin one may not otherwise be able to afford. I have a couple of these myself and have no problem with them being in my collection. I also feel that most older coins have been cleaned. We must remember this used to be an acceptable thing to do. Collectors wanted 'blast" white, gold, and copper colors. As long as the collector is aware of the coins true condition and doesn't try to sell it as a "problem free" coin, it's cool. My opinion. I could be wrong. Nice coin. Congratulations on finishing the set. Now what?