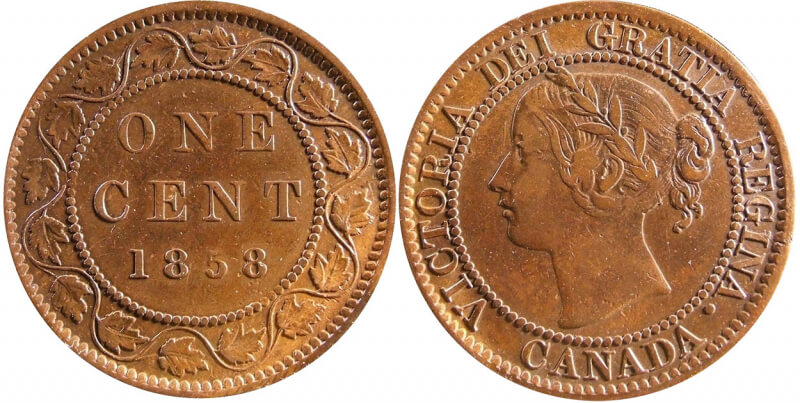 Throughout the week I reflect on the hobby, my collection and the reasons why contemplating the next blog topic. My primary focus, while not limited to, is the less common dime denomination of the United States which began many years ago. Thus far I have two complete series by date and mint-mark, the Winged Liberty and Roosevelt while the right 1895o has been eluding me from the Barber. Having been on the Seated for quite some time, down to 31 of those most difficult locate, I look to other coins as a means to keep active and not lose interest.  So this is how I arrived at the topic for the week, which I think you'll enjoy Moke, the Canadian Large Cent.                       Enjoy!

The cent, not only that of the United States but the world in general, has long been and continues to be the most popular denomination to collect. With the large mintages and overall low cost these small sized copper cents are plucked from change or purchased to fill an album or binder. As time goes on and sets become complete, many find themselves drawn to the large cent. As those who collect the U.S. Large Cent would attest to a date run of these becomes challenging when trying to locate certain years, particularly those of the Flowing Hair and Draped Bust series. While still achievable compared with other denominations, a nice consistent looking set would most certainly be financially taxing. The subject at hand, the Canadian Large Cent, is both a fascinating and beautiful alternative. Struck from 1858 to 1920 and with relatively high mintage totals across the entire series a complete set in almost uncirculated to mint state cost a fraction of the it's counterpart.

The obverse features a portrait of the ruling British Monarch (three during the series issue) surrounded by their name, Latin inscription "by the grace of God", and title with  "Canada" at the bottom.  The reverse consists of the denomination and date surrounded by vine and leaf. Struck in 95 %  copper with a balance of zinc and tin having a diameter of 25.4mm and weight of 4.54 grams. Of my own personal opinion, a design so simply yet elegant it is by far my favorite of all coinage. To see one in full red/brown, maroon blending into subtle chocolate with the vines almost gold is a sight to behold. Sadly, I got out bid!

Prior to Canadian Confederation in 1867, many consider the 1858 and 1859 issues to be British Colonial coinage rather than Canadian as they were the only two dates prior to resuming in 1876. In the early years, coinage was struck in England at the London Mint and shipped to Canada as requested. With 421,000 minted in 1858 and another 9,579,000 the following year, a lack of popularity by the public proved sufficient until resuming sixteen years later. In that time there were two obverse changes. The first bearing a portrait of a young Queen Victoria followed in 1876 with a mature head, both of which were designed by Leonard C. Wyon of the London Mint. With an order for four million placed, the mint soon found itself plagued with equipment breakage severely hampering  production and the subsequent five month delay in shipment. The Heath Mill, a private firm in Birmingham owned by Ralph Heath and having a close relationship, was called upon to rectify the situation by aiding in their production. These coins, bearing an H mint mark, would also be struck again in 1881, 1882, 1890, 1898, 1900 and 1907. Since London minted coins bear no mint mark 1900 and 1907 are the only two years which saw both struck simultaneously.

With the passing of Queen Victoria in 1901, King Edward VII would replace her on the coin until his own in 1910. It was during his reign in which significant changes had been made in coinage production. 1907 would be the final year for cents to be minted in London with the opening of a branch mint in Ottawa, the Royal Canadian Mint. However, the tools and dies still originated from London much like the Philadelphia mint in the United States supplies it's branch mints. While Canada as a nation now had considerable control over the reverse designs, the exception being for the obverse which were limited upon approval of England.

The final portrait change to the Canadian Large Cent is also an interesting one. With the death of King Edward VII, Canada was allowed the option of choosing the obverse inscription for the 1911 cent in either Latin or English text surrounding the new King, George V. With Latin being chosen,  the London Mint found itself with another problem similar to that of 1876 albeit of a design matter. Not to mention a soon to be embarrassing one. First, they realized that they were without a sculptor which caused for a delay in dies. Next, with India recently added to the British Empire, the new sculptor mistakenly replaced "DEI GRATIA" (by the grace of God) with  "REX ET IND IMP". or, "King and Emperor of India", and rushed them to Canada. Noticing the change, and not wishing to delay the much needed cent for commerce, the Royal Canadian Mint began striking until the corrected dies arrived. When the public noticed there was an immediate outcry calling them "Godless". In the end, the prestigious London Mint bore the blame, yet it truth it had been Canada's.

As with the U.S., version, the Canadian Large Cent surmised to the same fate in 1920 with the cost to produce exceed face value combined with a dwindling purchasing power. Despite being pulled from circulation and confined to the melting pot for recycling of small cents, large numbers of survivors still exist today. Finding mint state examples is an easy undertaking with few costing more than a  hundred dollars. Most less than fifty. So perhaps these are an alternative?

Thanks for the lesson. I have a Canadian Victoria cent in near mint state condition inherited from my maternal grandmother. It's a very nice coin, one of my best of Canada. Makes me want to see a hockey game or something! Lol

This is a very attractive coin. When I read your blog and viewed your picture, my first thought was, "I want one." We'll see. Thanks for introducing me to what previously had been unfamiliar to me.

Now this is what we call a fact filled blog. Nicely done. I learned from this. Thanks.

Having a Canadian large cent collection would be a nice set to have. The cost seems good compared to other series. I would like to have a collection. I do have a few collections of Canadian cents starting with 1920. I have not been continuing collecting the more recent cents, but my Canadian cent collections go into the 1980's complete. Maybe I should try looking at the large cents. Would probably go for certified pieces, and start with the one with less mintage. Enjoyed reading this about Canadian large cents, as I have always like Canadian coins, having lived near the border growing up.

These are fun to collect. Most of them are reasonably priced in circulated grades as well. Good blog.

Moke a large cent collection is right up your ally. . Long Beard knows you better than you think. A wonderful project for someone who has a passion for Canadian coinage. I would at least think about it. Long Beard another excellent blog. I enjoy everyone . This one particularly because it's cents and research you included speaks for itself. Thanks for taking the time to share your knowledge with us. Mike

Great Blog LB, As you know, I find Canadian Coins, especially pre 1968, to be quite interesting and highly collectible. I do have a complete Canadian small cent collection but maybe, just maybe, I need to start on my Large Cents. Thank You for your research and your beautiful example..