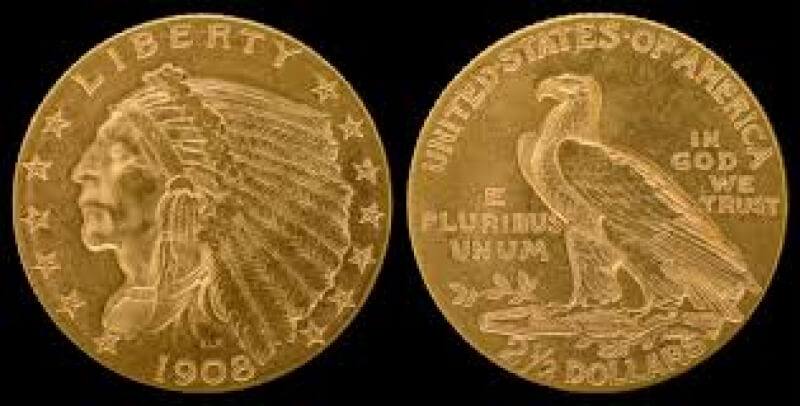 Gold. The symbol of kings and self-made men of wealth, power and social status. That which lures and captivates, conjuring up visions and dreams. This weeks blog covers my personal favorite of all United States gold issues. The Quarter and Half Eagle Indian Head. While many consider gold coinage to be out of reach, the 2 1/2 and Five Dollar becomes an exception for any collector on the tightest of budgets. Following  a quick search, common date specimens in the low to mid-grade mint state range may be had for under five-hundred dollars. Along with affordability this thirteen year series has one of, if not the highest, profit potentials of all gold coinage.                Enjoy!

The 5 Dollar Half Eagle. Struck in Philadelphia, Denver and San Francisco, with a single year New Orleans, from 1908  through 1916 (for the same reason as the Quarter Eagle) resuming for one year with 1929 Philadelphia issue. At 21.6 mm in diameter (nickel size) nearly all mintages are below 1 million, the 1909o being the lowest at 34,200 while two break the million mark.

With the mintage figures known it becomes easy to see the hidden value in a true sleeper series. While a common date may be had for near melt value, as compared to say a like-wise dated double eagle, the semi and key dates generally fall below the value of the same Twenty-Dollar. Also of note, the mint state populations of Quarter and Half Eagles are higher which makes for a better buy comparative to other denominations based solely on grade.

The origins of the Quarter and Half Eagles began with President Theodore Roosevelt's desire to redesign our nations coinage into something more inspirational. Contrary to common belief, only the Eagle and Double were designed by Augustus Saint-Guadens as he died in August of 1908 before completion of the smaller two denominations. However, they were based on his sketches which leads to this belief. The honor of these two beautiful denominations falls upon sculptor Bela Lyon Pratt, a student and close friend to the former. With the death of Saint-Guadens, Roosevelt put pressure on the mint to hire Pratt so no delay would befall production of what was started. The plaster models (galvanos) which Pratt created were both attractive and unique. Unlike other U.S. coinage, who's design elements rise above the surface of the Quarter and Half Eagle  are in relief but recessed so that the highest points are below the plane. Or incuse as it's termed. A first for any gold coin, not just in the United States, designed in such a manner since the 4th Egyptian Dynasty.  The mint mark being the highest point as it was hand-stamped into the dies.

Another little known fact is that the two smaller of the Indian Heads were originally to be downsized versions of the now famous Double-Eagle. In May of 1907, Roosevelt thought that the two smaller coins who's dies were not yet complete should bear similar but different designs than those of the newly struck Eagle and Double Eagle in a letter to the United States Mint. However, Chief Engraver Charles E. Barber, had already prepared dies of the downsized version but ran into problems, stating that the legends and other devices would be difficult to fit the design of these small size coins. This was the time in which Roosevelt recommended Bela Lyon Pratt.

Thanks for reading. Go for the Gold!

My fear is that gold eventually prices itself out of the collector market. For most of us, a gold coin purchase is a very special occasion, if at all. Young collectors can't touch them, and their Red Book stops at the mini-dollar (everything after that is a dream). Having a $20 gold piece is almost like having a Corvette in the garage. I'd hate to see U.S. gold coins end up the playground only for the very rich.

You are right on target with this comment. I finally bought an MS 63 St. Gauden after wanting one since I first saw one as a kid. I also bought a 10 dollar Indian this year and a type l gold dollar. Had to wait until I was 62 but I'm glad to have them. I don't think I'll be buying more though. Too many other fish in the sea more affordable!

I've never been much of a gold buyer due to the high prices, but I do find the history of the coins fascinating. Thank you for the interesting post, Long Beard!

These two denominations are some of my favorites in gold, especially because of the incused design. I don't believe there are any other incused U.S. coins I can think of off the top of my head, but I might be wrong about that.

Compared to bullion, some gold coins are reasonable priced.

The only gold coin I own is a 5 dollar Liberty Head I won at our local coin show with the raffle ticket. The gold coin happened to be the grand prize. It did create some interest for me in gold, but I can't seem to get real interested in gold. The price of everything is so high. I have a common gold coin, maybe worth around 425 dollars? Nice prize though. I do wonder though how high the price of gold may go in 1-5 years? Is paying 1700 dollars for an ounce of gold a good investment? If I were to buy any gold, I may buy a coin like the one I have. Thanks for the blog on gold.

Congratulations on the raffle win. Awesome! Never one much of anything myself, and not for the lack of trying.

I have never had the budget or the patience to buy too many gold coins, most of my gold over the years has been Canadian. I did own an Eagle at one time but that is long gone. I would love to add a Pratt to my collection, patience, patience, is the key. But my New Brunswick 1/2 Cent has precedence. Thanks for you very interesting and informative blog.

I have a friend that is working on a complete date and mint set of the quarter eagle in about MS-62 condition. Of course, the 1911-D key to the series will cost him a bit more. For myself, I have a 1914-D quarter eagle and a 1910 half eagle both in MS-62 residing in my typeset. They are both excellent examples of our renaissance in coinage brought about by Teddy Roosevelt. Furthermore, the quarter eagles are the only gold coins in which it is even remotely feasible to collect as a complete date and mint collection. They are plentiful with only one key date and what I consider as a semi-key date in the 1914.

Thanks for adding the of ease of completion on the Quarter Eagle. It was in my notes but overlooked somehow.

I was into good awhile back it was 1850.00 an ounce I had 24 carat bullion. Went to a place the girl did not want to buy it the gentleman was and said give him full value. . My wife and I went an bought a car that day. Since then . I still like it but I don't seem to have the interest.. I enjoyed your blog there is gold you can buy and not go broke . Thanks for the blog and the numbers. Brings back good memories..