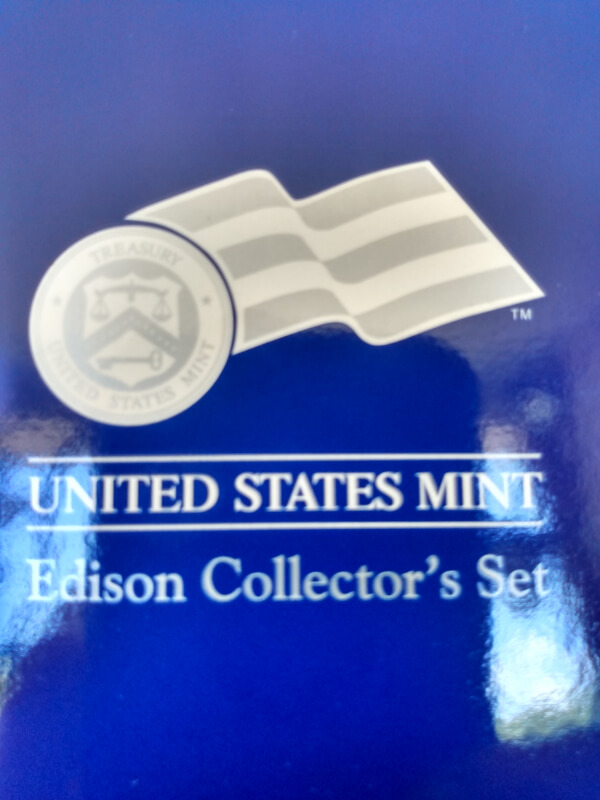 As I sat here performing my early morning routine, having downed one cup of coffee reading the news, I took a moment after the fact to reacquaint myself with the hoard.  Collection just doesn't quite fit the description any longer. So, now well into my second cup, as I admired the 2004 Edison Collector's Set- pictured as reference- and thinking of what's being offered from the U.S. Mint this year, instead my mind shifting to the debacle created by the same and all of those like myself justifiably upset. Rather than linger in disgust and frustration, neither of which solve a thing anyhow, I decided to change the view looking at some of the positives.  Which is the discussion of this weeks blog.                                         Enjoy!

In yet another case of a blog subject arising out of no where, my hand just happened to reach for the 2004 Edison set, among several others, and the thought of a bright idea attached to the title seemed quite appropriate.  The commemorative legislation for the Edison dollar called for a mintage 500,000 across all options. Of those, 92,510  in uncirculated and 211,055 in proof were sold.   Among the uncirculated total was 24,490 of the Collector's Set offered later in the year. With this special set having a maximum mintage of 25,000, looking at the figures shows quite a surprise. So I pondered on a few things. Why such a close sell out? Popularity might be a factor. Until the thoughts of earlier, before rethinking and the subject matter. There was no immediate sell out like several within in the last year.  Most peculiar indeed. Obviously the design of the packaging played a large part, a translucent light blue plastic bulb in the shape of Edison's original- actually lighting up mind you, complete with a changeable watch battery.  With all the bewilderment aside, there were many times the United States Mint got something right. Without all the hassles, confusion and glitches as of late. For length we'll stick to a select few of the offerings, all without mintage limits to avoid singling out the headaches bestowed upon collectors within other equally positive products. Like the hugely successful American Eagle Program initiated in 1986 with Ronald Reagan's signature and John Mercanti's design.

First, the Prestige Proof Sets beginning in 1983 and ending in 1997.  These sets were, and still are, loved by a large percentage of the collecting community for their book-like design covered in fine velvet binding and containing the proof dollar issued the same year.  A first, which would follow in the years to come through similar, yet less attractive offerings.

The 1996 Uncirculated Set.  This set contained the West Point struck Roosevelt dime, in it's separate pouch. This was apparently a marketing strategy as no true reason had been given for the inclusion. Which worked very well as sales for the year jumped slightly above 40% after a dismal downward trend in previous years. Although the West Point mint had been striking coinage since the early 1970's, albeit without a mint mark, this is the first denominational coin bearing such. Even as it is legal as ten cents in commerce, it was not issued for circulation. So it is quite possible to find one in change. Rare, but likely.  Again, this coin would be a precursor to future coinage. The 2019w Lincoln Cent and the 2020w Jefferson Nickel. Once more, the United States Mint got something right as sales for all offerings saw substantial increases to slumping previous sales.

And finally, the greatest idea to originate from the U.S. Mint. The Statehood Quarter Program which began in 1999.  Which is most self explanatory.  And so, as I type this, and about two-thirds through a second pot of coffee (it's now going on 10 p.m., and yes POT not cup), somehow the complaints seem less important.  Maybe switching to decafe might help?

Really cool! I have never seen this before. Thanks for sharing! ; )

I have never seen that one before. Brilliant. Nice to read a positive blog on mint successes. I'm as negative as many on that subject. I think I may look for that one. Those are some nice sets. Thanks. P.S. Edison really did some terrible things to Tesla, my hero. Still a sharp coin!!

Who did invent the phone? That is the question. Besides that his inventions are to many to list.A good read. My hands are gone bad. But I will get one up soon. Enjoyable and I picked something up!! Thanks for the numbers. They do affect the coin. . Maybe I will. The set sounds nice!!

I hadn't really intended on the Edison commemorative that year, but the set called to me. How could it not with a working lightbulb theme? Which is actually curved and protruding about half an inch or so, hard to tell in the image.