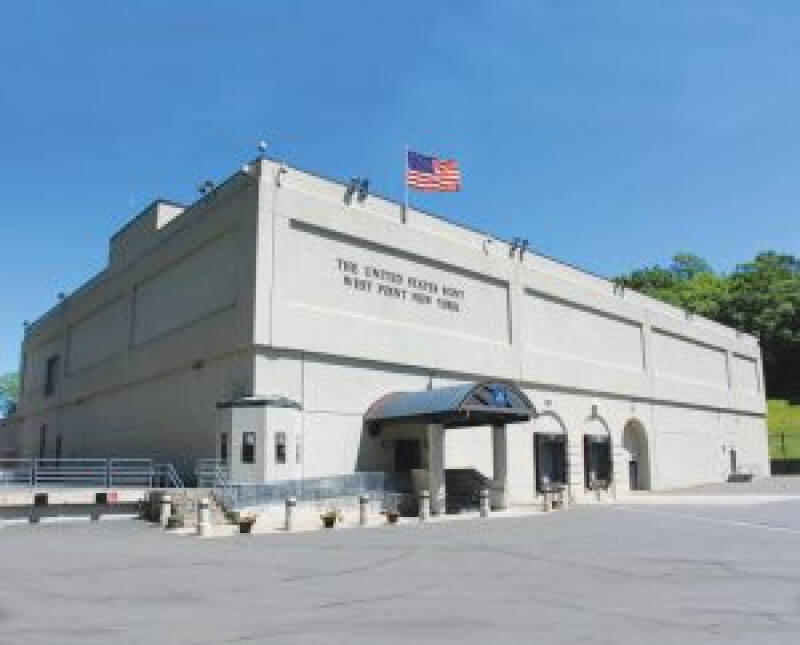 Situated about a mile due west of both the Academy and town  which bear the same name, a little known mint facility has played a vital role to the United States Treasury going beyond coinage alone. With the release of the West Point quarters in 2019 this once overlooked mint has been thrust into the public spotlight. While true, many in the collector community have been aware of it's existence largely due to the American Silver Eagle program,  the general public not withstanding, the origin and history prior to 1996 are cloudy at best to most.  Erected on a four acre plot of former West Point Military Academy property allocated through the Defense Department in 1937,  yet not associated with either,  officially opened in 1938 as The West Point Bullion Depository. Designed by architect, Louis A. Simon, this simple 170 foot by 256 foot nondescript  structure of reinforced concrete served as the primary storage facility of bullion, largely silver. So much so that in a short time it became known as the Fort Knox of Silver, a nickname which still remains to this day.  Unchanged in appearance until a second story was added in 2005 (see the color facade image),  this little mint has a story equal to, if not greater than, that of the several other branch mints.

As war raged across Europe and the Pacific in the late nineteen-thirties and forties, several of the European nations began exporting bullion to the United States for fear that Germany would surly seize such vast treasure.  While the bulk of these shipments were  stored at Fort Knox in Kentucky, a portion had been sent to the depository at West Point.  As a result, these same nations needing the bullion to keep their economies fluent and functional,  the West Point mint played a vital role in just that.  Under the Congressional Lend-lease Program,  an astonishing 410 million troy ounces of silver with a value of nearly 300 million dollars  had been loaned to Allied nations in both theaters of war. While the primary use was for coinage or currency stabilization, others used it in the industrial sector. Even our own Atomic Energy Commission received loans during that time period. In the coming years this New York depository would house the largest concentration of silver, as well as other precious metals, in the United States. In fact, gold had reached a record high of almost twenty-billion dollars by the mid nineteen-eighties.  Since opening, and following World War II, the West Point Depository was the key supplier of silver sent to the various mints.  While official records are sketchy as to when coinage presses arrived at the facility,  the first strikings occurring in 1974 suggest around that time.  These were Lincoln Cents without a mint mark to aide the Philadelphia mint during a supply shortage. Quarter dollars would follow in 1977.  The first coin struck bearing a  "W" mint mark came in September of 1983 with the Los Angeles Olympics ten-dollar gold commemorative bearing the year 1984.  Another first credited to this yet to become mint, the use of gold in coinage available for sale to the public since 1933.   As the newly restore commemorative programs beginning in 1982 grew, President Ronald Reagan saw fit to sign into law the American Silver Eagle Bullion Program. An award given the West Point Bullion Depository in late 1985, striking the very first such the following year. Two years would pass, striking coin as a depository, until March 31, 1988 (coincidentally my birthday- turning 21 to none the less!) when it was officially reclassified as a United States Mint.

Aside from the a fore mentioned, there are many firsts originating from the newest mint under the Treasury Department.  In 1996, a special uncirculated coin set with an included "W" Roosevelt dime.  1997 also saw the first ever platinum American Eagle, struck at West Point.  In 2000, the first bi-metallic coin, the Library of Congress ten-dollar commemorative. In 2014, a  reverse proof, the Kennedy half dollar. In, the first reverse proof dollar included with the Native American Coin and Currency Set.  In 2019 the first "W" Lincoln Cent. In 2020 the first "W" Jefferson nickel. Oh, and the 2019 quarters bearing a West Point mint mark.  With such a list of accomplishments as those, how could West Point not rival the bigger names?

Nice post! I found this to be a very fascinating read. Cheers, NumisMaster

Great lesson about the West Point Mint. I found some details I was not aware of. Thanks.

Too bad there wasn't someone working at the West Point mint back in the 80's like Samuel Brown (who is credited with striking the 1913 Liberty head nickels). Imagine if they had smuggled a "W" mintmark inside and marked a die! Instant 1980 -W quarters!

I learned quite a bit from this blog. Thanks, I enjoyed it.

Thanks for an interesting blog! Great research! ; )

Amazing that countries sent us their bullion for safe keeping. Really interesting information on West Point mint. Thanks also to skybluenote for the inspiration to wrote about this mint.

More often than not I find my inspiration for topics through others. Glad you enjoyed the post.

Great blog. The West Point mint was making coinage for the U.S. Long before it became a mint of the U.S. That happens in the 1980's. They made regular business strikes. quarters cents on and on and never put there mint on them. The coins were put into the mintage of the other mints. Think about how many coins are out there!! I enjoy all your blogs. They have it all. I know you write once a week but there worth waiting for. Thanks !!

They've churned out billions of circulating coins since the seventies when needed. Sad that we'll never know which is from West Point as none mint marks.

You're just too kind for the shout-out Long Beard. I sometimes travel down into that part of the state and have considered checking on taking a tour when they open back up. What a history perspective. The closest I've ever been to a Mint was when I was in Washington, D.C. and walked by the Treasury Department...LOL Thanks for another GREAT post buddy!

That is nice info. Because of my love of the American Silver Eagles I was aware of the West Point Mint, but did not know the history. Thanks!

Thanks for the blog, it's interesting to understand some more history behind this branch.

410 million ounces for 300 million dollars, if only we could get the now. West point is the most exotic mint for me.

Nice to some historical background.

Thanks for the great information. I really haven't ever seen anything written about this mint and it's history.