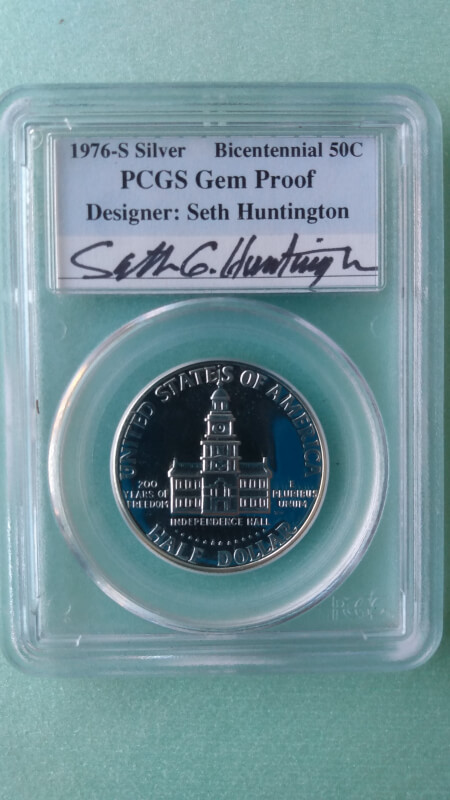 Fifty years ago, the Bicentennial Commission began promoting  the then upcoming 200th Anniversary of the United States.  The subject of this weeks blog.     Enjoy!

1971 saw the first release of medals in honor of the event, with new additions in each of the years leading up to and including  1976.  Your's truly began the journey into numismatics squarely in the middle of this historic event in 1974 or 1975 ( you'll have to excuse my forgetful mind).  What I recall are the many collectibles, tokens and medals being offered for sale or at times simply passed out as a promotional device for local business.  America's Bicentennial, as everyone referred to it, was a matter of true pride no matter where you were. From the big city to the small rural town.  As I write and reflect on these days long gone, I can not help but ponder on the upcoming 250th Anniversary in five short years.  And I think about we as a country, the manner in which we as a people see ourselves. To be certain the celebration will be enjoyed, yet the anticipation thus far is without doubt lacking.  While there has been initial discussion within the U.S. Mint and the Treasury Department pertaining to coinage, nothing remotely conclusive has yet to be released. As coin collectors we know it's coming, yet at present a mere idea.  Fifty years ago, the general public was getting their first glimpse of such a grand and historic event five full years in advance.  So one can only wonder the when and how.

While in possession of nearly the full set of offered medals from 1971 to 1976, the decision was made to save them for a future blog when the official announcement to the public is made on the 250th Anniversary.  Instead, the three Bicentennial issues of 1975-76. The three example acquired currently trade at a premium above the grade of 69 despite being graded Gem, or no grade.  According to PCGS, this simply means the coin is guaranteed to grade a minimum of 65, none of which are registry eligible.  The coins shown are one of three label encapsulations offered. Designer Autographed (shown), Artist Edition and Reunion Edition. Designer series are actual hand signed, not photocopied, as evident by the ink bleed and color variations of each signature. The Artist Edition are similar, yet printed signatures, and number to a maximum of 10,000 examples. The Reunion Edition is the key to the series for those looking to collect these, hand signed with a total of 500.  At the moment, in my opinion only, the numbered series are extremely under valued, about half again what the Autographed series cost. This becomes baffling because I've only seen a handful over the years come up for sale, while the autographed are rather common. Something to keep me active in the hunt!

The three artists, ordinary citizens, selected by the Bicentennial Commission in conjunction with the United States Mint from the national contest.

Each were awarded a $5,000 check by Treasury Department Representative, William E. Simon at a Washington D.C. ceremony held on April 24, 1974.

Two days later the trio were doing a photo-op tour of the Philadelphia Mint as the die designs were being transferred. Will we see another similar contest for the 250th?

Wonderful set to have . US Mint houses never cease to amaze me, designs are great. Be aware that plastic casings tend to catch humidity.

Wow. Did not know that. I bought these for the signatures since the designers were ordinary individuals with true talent.

Nice set of coins. I remember receiving my mint and proof 1976 sets in the mail.

The Bicentennial sets were the first mint products I bought when issued. Still have them.

Nice blogs. I believe these coins brought new people to the hobby.

I still remember the great excitement I felt as a young teenage collector during those years. I am hoping we get the same sense of excitement leading up to our 250th, I like to think the Washington Xing the Delaware is the first shot of revolutionary change in our coinage culminating in 2026. Thanks for the reminder LB and let's keep all our collective fingers Xed.

I hope so. But we seem so divided these last few years, all the groups and individuals.

Very interesting. You are correct, that was a great time for our country. I only hope we see it again. Very nice coins to own. Thanks.

An excellent read on an excellent set. I also have it signed . And slabed MS. 69. Now no one would believe we're I got mine . Littleton! It was the only set I bought from them. There beautiful in any grade. There still out there to buy. I think they speak the true heart of our country. Thanks for a great blog. You have to love this set. Thanks for putting them up. And writing about them. .