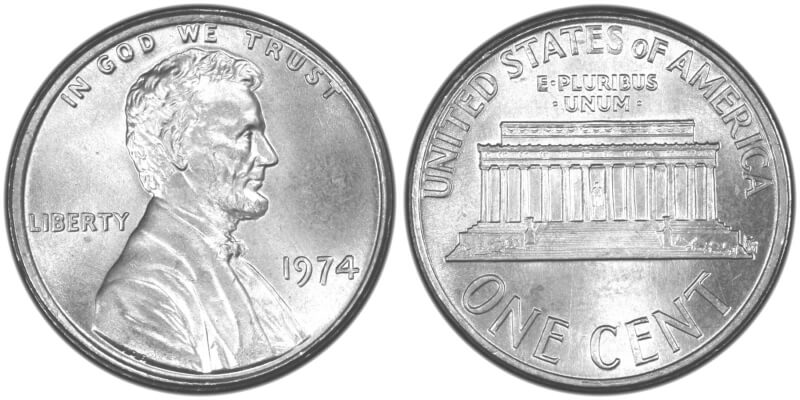 In an earlier blog this year a discussion on the elimination of denominations that near or exceed their cost to manufacture versus that of face value, this week's blog  looks beyond the alternatives at a coin which proved it a reality.  Yet  failed for reasons few know of.             Enjoy!

A change in coinage composition is nothing new. From the simple reduction in a metals amount and at times a completely new metal or metal alloy. In most, but not all, of the instances these changes have occurred in the many years since first coined in 1792, the cost to produce has been taken in to account. So as the metals used in their manufacture increased in cost, steps were taken to keep them economically sound. In the beginning a simple reduction solved this, such as those made to silver coinage in the mid-1800's. The first major change to a denomination of U.S. coinage, a total new composition, arose in 1856 with the introduction of bronze cents, or the Flying Eagle design.  Not only was nickel now being added with copper to strike these new cents, it's reduction in size from the cumbersome and waning popularity of the Large Cent proved highly successful. This new 88% copper, 12% nickel would suffice for many years to come. Yet try as they may, metal prices will increase and the inevitable will at some point need to be confronted once more.  Of note, discussing cost, silver coinage had experienced a much higher rate rise creating mass hoarding leading up to and during the 1860's. A situation which had not been addressed as was the cent and will be addressed further on in the discussion.

Over the course of 86 years the cent, as did other denominations,  had gone unchanged.  The second major change to a coins composition came not due to the metals cost, rather it's use. With war raging across Europe and the Pacific, much needed materials were essential to the war effort. As such, the copper-nickel cent had been changed once again to zinc plated steel in 1942 and a 95% copper, 5% zinc "shell-casing" in 1945.  The nickel had also been changed in 1942  composing of 56% copper, 35% silver and 5% manganese. Both of which reverted back to their respective compositions upon the end of World War II.  All be it for different reasons than monetary, The war years were the first time the United States Mint examined a vast area of alternatives for the production of coinage. Experimental pieces had been struck in various materials, many of which had not existed in the past. Plastic, glass, rubber, bakelite, fiber and a host of unusual compositions. All of those composed of metals were struck at Philadelphia while the others were contracted from private firms. Although the majority of these substitutions are far from useful as coinage, the intent and initiative undertaken shows not only possibility but a seriousness to change as needed.

Over the following years, as the war had ended, an economic explosion took place especially in the manufacturing sector. As a direct result, metal mining and production also increased. With a rise in demand, so followed the cost as once again this faced the mint. As happened in the past, one hundred years prior, silver had now exceed face value of the coin being struck and hoarding began yet again.  To remedy this, in what the mint hoped to be for the long term, the Mint Act of 1965 saw the elimination of silver from all circulating coinage and the recall of silver certificates. The dime, quarter, half and dollar (at the time  newly passed legislation would see it's return in 1971.) saw the first major composition change since 1792. This brings us back to the previously mentioned changes of 1865. While at the time the smallest denomination had changed, this time it along with the nickel had not. Records of the time show that, despite the metal cost being below  the coins value, the difference was extremely close. Enough that one would think the Mint must address. Which they most certainly would.

With the cost of copper at  0.08 per each cent, not to mention labor and transportation costs associated in production by the early 1970's, the matter became a top priority for Mint Director Mary Brooks. In July of 1973 she moved forward with a plan to resolve the high costs. Having contemplated the original steel composition as used in 1942, the use of aluminum was deemed more beneficial. In fact, this was not new as many patters were made of the metal dating back to the early eighteen hundreds. Not only was it cheaper, the striking of aluminum extended the die life two-fold thereby saving even more.  Under the suggestion of the experimental team, sheets composed of 96% aluminum with a balance of trace metals were shipped to Denver as the the presses there were slightly larger than those in Philadelphia. The idea was to test the structural integrity using the larger Denver blanks in the smaller presses. Under direct orders from Brooks, the mint in Denver was to stamp out blanks and return them to Philadelphia, not to strike any coin. By fall, the newly struck blanks were fed into the presses striking a total of 1,571,167 Lincoln Cents bearing the date 1974. With legislation before Congress to authorize their release, Director Brooks was certain these new, well struck replacements would indeed enter circulation in the coming year. The handing out of an unknown number to Congressional members, many of whom like them, only reassured her beliefs on the matter.  What neither she nor those in Congress foresaw was the fierce opposition as the hearings proceeded. The first, and major, of which came from the copper mining and manufacturing sectors who stood to lose billions should the metal be removed from cents. Next came the vending and counting machine industries who claimed they would cause problems requiring expensive recalibrations if not all new machines. Yet a third group weighed in with opposition, doctors. Specifically  those in radiology sighting the difficulties in detecting them on an x-ray should an individual have ingested one. After all, small children eat anything. Having heard all of these arguments, and knowing of their influence when it came time for re-election, the bill failed to gain the required votes for passage.

With a law that would have seen their release dead, Mary Brooks had no recourse other than to recycle the entire production run. As for the specimens passed out, those were requested to be returned. While many had been, several have been confirmed as discarded by politicians following the hearings. An estimated count puts the total still unaccounted for at between 12-14. Only one has been saved, according the mint officials, and resides in the Mint Cabinet at the Smithsonian. Another, graded MS62 by PCGS resides in private hands and another, discovered in 2013, is an MS63 also graded by PCGS from Denver. This specimen will be for another potential blog in the future keeping to space and the topic of a composition change.

With legality and the mystery surrounding the 1974 aluminum cent, the fact remains that a plausible and proven alternative exists to keep the beloved Lincoln Cent alive while cutting the cost to do so. Yet clearly, as has happened with the nickels creation, those behind the coin control it's destiny.

With the extreme rarity of the 1974 aluminum cent, the image is courtesy of PCGS.

I have heard of the 1974 aluminum cent it is listed in the top 100 greatest US coins.

Very interesting blog. Great details. I just read the Mint has a new set of change composition proposal that include some non-iron iron.

Great blog. I knew about the aluminum cent but learned a great deal more. Thanks. Cool.

Great research! Thanks for an interesting blog ; )

Very interesting history for the Aluminum Cent, I had known they were produced but did not know the whole backstory. Thanks LB, you have learned me something today. (:

It's a shame 1974 aluminum cents didn't circulate. Wonder how many years they would of made aluminum cents if the mint did start making them ? Great coin and history lesson. Thanks for sharing !

That was something I didn't know, wowser! Thank you for the well researched and written blog. I loves me some history and coinage facts! Later!

I hadn't known about this so I enjoyed learning about this! Thanks so much!

Great blog . I remember that . Thanks for breaking it down for me. Still learning after all these years that's why I love this hobby. Well done. He safe be well. And thanks for sharing your knowledge.