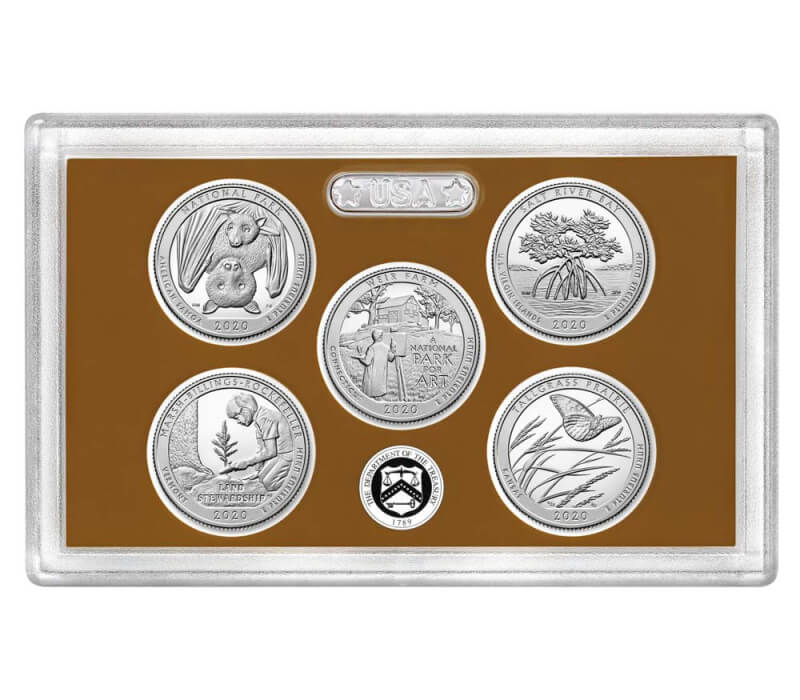 Beginning in 1999 the United States Mint launched the now highly successful 10 Year Statehood Quarter Program followed on it's heel, although slightly, by the America the Beautiful Program. Despite a steady downward sales figure, both have and continue to introduce new collectors to coin collecting in numbers not seen since before their introduction. With the program conclusion scheduled for February1,2021, and no planned announcement of a replacement,  the direction of the United States Mint and possible repercussions are this week's blog topic.     Enjoy!

A few years back when the decision and forthcoming announcement were made, the first thought entering my mind was the cost of each set. With the addition of a third encapsulation, or extra blisters in the case of mint sets, for each of the years quarter designs the price rose accordingly. This poses two options. Lower the cost to near pre-Statehood prices or keep them at the current. From an annual sales report standpoint this seems nearly out of the question. To remain the same would spell disaster to already slumping sales Surely these questions have and are on the mind's of Mint and Treasury officials. A third option would be a replacement even as initially none had been planned.

So what are some options? The Innovation Dollar Program has been mentioned within the collecting community, and possibly under consideration by the mint. Yet this also brings up another unlikely scenario. First, the program is designated non-circulating meant only for collectors through direct purchase from the mint. Although, technically, this may work for proof sets, the uncirculated annual sets contain coins produced for commerce. One could argue, however, that the half and dollar fall into this same category. Another issue would be that future sets would be one year short of the programs complete run as the 2020's have already been released.  One other option might be a five coin inclusion of West Point mint marks from the cent to dollar. Which seems the most plausible as the cent, nickel and quarter have thus far been issued.

The greatest concern is that to the hobby as a whole. Will many of these collectors created by two programs abandon the hobby? And what's to come as an introduction for future new collectors? What ever happens will prove very interesting.

I agree with Mokie and others, a new series of our circulating coinage would be great. That being said, it seems the mint is having a problem just supplying the public with business coinage right now. I think with all these plague problems going on this is going to be a great year for error and variety collectors. Not my original idea. Thanks Sam.

I am not a big proponent of collecting NCLT coins from any jurisdiction although I have my share of those types of coins. I would love to see a complete redesign of all our circulating coins and the Half Dollar in the coming years, leading up to the 250th Anniversary year, 2026. I am collecting the ATB quarters from circulation but I have not been interested in the special issues, proofs, or Ws. As for the Innovation Dollar, it will largely fall by the wayside in my collection. I do like some of the commemorative coins, the last I actually bought were the Apollo 11 type. If they come out with something equally historically significant, I will certainly by that as well. I prefer older coins and interesting foreign coins, I am also moving slowing but surely into the realm of currency collecting. The future will be interesting for us all.

Too many many for me also. First time in over 50 years I did not order from the mint.

I collect the coins as they come out, but mainly am interested in older coins, 1960's and earlier, along with foreign coins. I like to get new coins in business strikes as they come out from the coins shops. Probably the smartest business decision the Treasury could make would be to get out of direct selling to collectors and get into letting the dealers buy them and resell them in my opinion. Here is a suggestion: how about a signers of the Declaration series of Washington Quarters? Too bad George Washington did not sign the Declaration,,,,, Wouldn't that be an interesting coin to see? A coin with Washington on both sides stylized differently?

To many options for me. I enjoy what they have, but I will mostly look to collecting older coins. If I like sonething modern I will purchase it, but dont plan to collect everything. I will purchase the newer issues as gifts, and that might get me interested more.

Thanks I have an interest in these sets. My son started collecting the statehood quarters. Saw the ATB sets and told me he wanted to collect only the silver proofs. Now he's one quarter away from collecting the silver proofs. The quarters for next year I understand will have animals from the different states.. He's not thrilled about that. Hope he changes his mind. When I entered them into the Regis set they priced at a nice price. I think that your right. They were the most successful coins that brought more people to the hobby than any other coin. Thanks again always enjoy your blogs.

I am a bit exciting, i think the designs on the national park quarters are great, and they would be outstanding if the mint would go back to double press instead of single press to bring out more details, but I am looking for something new. We've had Washington on the quarter for nearly a hundred years, I think a whole revamp would do well to bring more collectors in. People would star paying attention to coinage, start picking up older washington quarters here and there because they are no longer made. I just hope they blow a once in a generation opportunity for such a change.

Seems they have just about got it covered , the quarter programs starting in 1999, then the nickel series in 2004 and the cent series in 2009. Would be interesting to see what they could do to the dime!