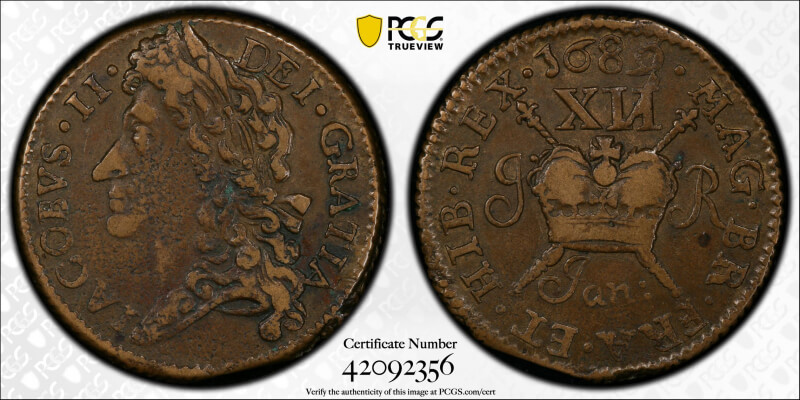 Consisting of bronze, and with quite certainty that of used cannon or church bell, hence the name. Coins struck during the two years (1689-90) of Edward II's exile in Ireland, waging war against England to reclaim the throne, were stamped with a month-located below the crown on the reverse- as a method of paying interest to the loyal troops under his leadership upon a victory.

That's a beauty of a coin I would love to read about it. How did I mis this?

Great coin, and what a bargain.

What I find baffling, I paid $128.50 from a dealer in Ashland, MA. PCGS shows only seven total on the population report, four being higher. Knowing this, that was an outstanding price since another sold at a Whytes Auction in London back in February grading an EF40 for $2646 EU plus commission. So in all honesty, this one would likely bring a bit more if sold abroad. Not bad if one does a little research before buying.

I like that. I don't believe I have ever seen one before. I have read about them. Thanks.