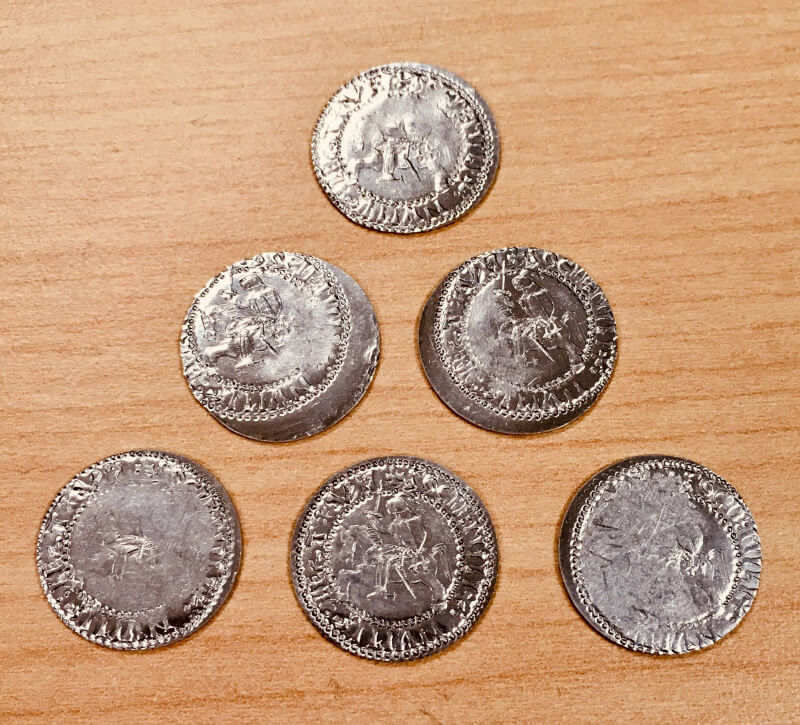 For those who have been reading my blog series on The Making Of A Medieval Style Club Coin and waiting for Part V:  Making The Coins, so you could see what the coins actually look like...  The coins have been made!  The Legacy Knights Numismatic Society met with the moneyer on Monday, November 26th.  He brought with him all the coins he had made for us, plus everyone attending the meeting got the chance to hammer several coins in aluminum for themselves!

I was going to wait to show them to you until I had Part V of the series written.  However, life sure seems to have gotten busy in the aftermath.  There's a lot to tell and I want to tell it right.  So I am not waiting any longer to show you the coins.  Our moneyer, Mr. Carson Engle, did a great job in creating a medieval looking coin that bears elements from across the time period.  He also did a great job in educating our club on the art of hammering coins and the life of a medieval moneyer.

One thing I learned, and I may expand upon in Part V, is that it is apparent that if you want fully struck, detailed, centered hammered coins, it takes practice, practice, practice!  The results Mr. Engle achieved in the batch he provided us yielded a significantly higher percentage of well-struck coins than any our members struck for themselves!  Even skilled moneyers don't get them all perfect... but then again, they didn't 1,000 years ago either, so this is historically accurate!  If you want fully struck, perfectly centered coins 99.9% of the time, maybe you'd better stick to modern ones.

Here are some samples from Mr. Engle's work, in aluminum, copper, and sterling silver.  I've also included an image of the ones I received from striking some for myself at the meeting, which are typical of what the student members were able to do.  Only one has a great strike, and there's a story behind it!  But that will wait for the official Part V.

Many thanks to Mr. Engle for working with us and doing such a great job not only on our coins but with his presentation.  If you are interested in commissioning your own hammered coinage, he may be reached at twobearmint@gmail.com.

Thanks all! I just finished Part V of the series... I had started it on the 28th of November but didn't get it finished until today the 13th of December... but the blog site posts it under the day you started it, not the day you release it to the public. I am going to take it down, and re-release it like it's brand new today, that way the dates of my blog posts are in order.

Actually I will just hide this one so Part V appears to be the latest, since it really is.

Wow! They came out great! You and the members should be very proud of the finished coins! I like the "off-center" strike too. Thank you for sharing these with us!

Wow!! All your hard work has definitely paid off. Those are great. I especially like the copper and off centered ones. Thanks for the update. I'm looking forward to the next chapter..

Wow, those are absolutely wonderful looking. I especially like the ones that are off-center. You have done an outstanding job bringing your concept to reality. Bravo!!!!!

Thank you! If off-center is your thing, then medieval style coins are the ticket! It's one of the few instances where being noticeably off-center is not an error coin!

I just remembered it's hard to see all that great detail. Does it have the date you were formed? It is beautiful with or without a date. Mike.

No, these coins do not have a date. Late medieval coins did, like the Lithuanian half-gross that inspired the obverse, but early ones did not, like the Aethelred penny that inspired the reverse. I don't think the kingdoms minting coins in much of Europe in 500-1200 much cared what year a coin was made; they were identified by the monarch's name on it, or the moneyer's name, mark, and city of mintage which might have been on it. You could narrow it down to a time frame that way. Later on for some reason it became more important for some to list the year. Maybe it had something to do with knowing which coins were debased and which weren't... a date made it easier. Or, maybe enough people of nobility were collecting coins by then that it helped keep the collector market going. ;-) I'm hoping to get a digital microscope/camera combo sometime so I can get good, clear pictures of coins' details, without reflections etc. I hate trying to get decent pictures with a phone. I could buy a light box but I tried something like that once and wasn't happy with the results... I will keep trying.

Nice looking coinage - you're living the dream of many of us!

Thanks! I don't get a commission for saying this, but if you are curious as to how much it would cost you to have your own medieval coins made, contact Carson Engle at twobearmint[at]gmail[dot]com. I don't know what you expect this type of project would cost, but you might be surprised. Design complexity is a big factor. If you need a more machine-produced look, Shire Post Mint does good work using rebuilt antique presses.

That's pretty cool. Ive tried to make my own coins out of clay before.. but they look horrible. Your coins that you guys made look great.

You did a wonderful job with the design and the process from beginning to end Mr. Eagles did a great job also. Wonderful work. I can't say anything else but congratulations to you and your club. You do great things there keep it up. You should be proud. Mike