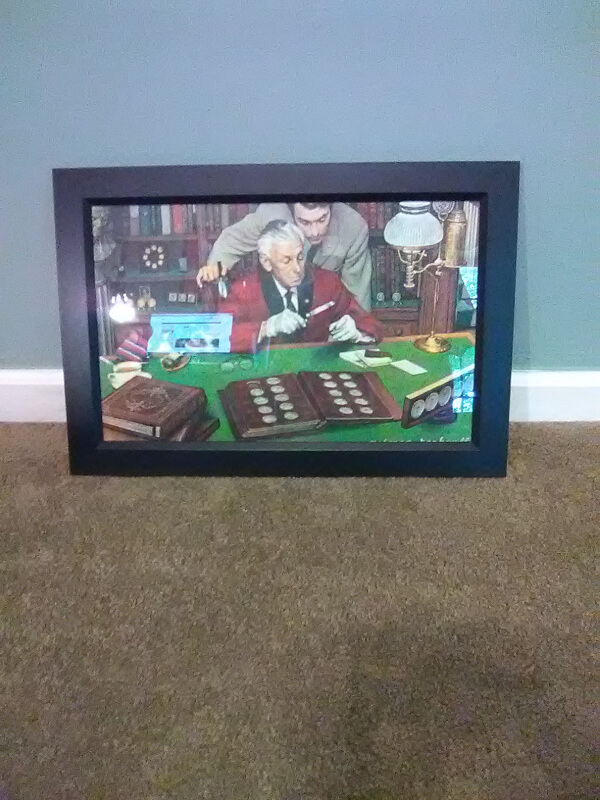 Back in 1971 when The Franklin Mint was raking it in big time, they approached illustrator Norman Rockwell to commission a painting exclusively for Franklin Mint members. Titled "The Collector," the original painting depicted a  stately senior-aged numismatist (in a smoking jacket with white gloves) in his library, going over his collection with a presumed family member. Nearby props include a faithful dog, pipe, and books (but no familiar Red Book!).  Copies were sold to Franklin Mint members and can still be found on the secondary market (I purchased mine for under $20. It's framed and waiting to get hung in my man cave).  It's a nice piece of art to go with the room you devote the better part of your collecting to, and face it, there isn't many pieces of numismatic art you can hang on your wall. (On the other hand, you can easily fit a beautiful Saint Gaudens in your pocket.) In 2014 Christies auctioned off the original painting for $965,000. Even more interesting was an early study of the painting done with the collector studying his coins alone.  I can't make out any of the coins or titles of the books in my copy, but the old man oddly resembles Frank Lloyd Wright.

I remember as a kid seeing those Saturday Evening Post artworks reused from time to time. Especially the Santa and Coca-Coal around Christmas. As for "The Collector", that's one I've been looking for many years at a price I'm comfortable with. By that I'm referring to a nice lithograph.

Very nice print, thanks for sharing.

I love Norman Rockwell prints and this is the one I can relate to. He had a way of speaking to people through art. To the average person though this is one of his least relatable pieces.

definitely a cool way to express numismatics... very cool that they got Rockwell to do it... Funny, I didn't see a copy at his museum... perhaps they only showed originals or something...

I feel like that is the stereotypical coin collector. But hey! there are plenty of young people in the hobby as well!

there are, but percentage wise? let me put it this way, its at least small in my geographic area (I've never seen more than like two 21-under people at the local coin show, and I'm the only under 40 (guessing by the hair...) member of my club...)

Look at all the gold! Mokie is right. It makes us all look like old guys. Hey, wait a minute. 66 Ain't old is it?? Nice copy showing the style of the times.. Thanks.

that's why the younger dude is there.... gramps is showing him how numismatics works, and he's standing there thinking "I could get some nice green for this" :)

I think that old Dude has at least 20 years on both of us. He better have his estate in order. LOL

I like it but it kind of reinforces the stereotype that we collectors are a wealthy and very ancient lot. Having said that, for 20 or 30 bucks, I would happily hang it in the man corner.

Nice print. But a bit overdone. It was meant to make you spend your money with them. I never spent a dime with them. They just never appealed.to me. Thanks for sharing. Its appreciated.

That is really a nice print. Got a deal for 20 dollars or less. Will be on the look out for one at antique stores and flea markets. Be neat to see one out and about. 49 years old also, bet a lot have been thrown out or damaged. Thanks for sharing, this is really nice.