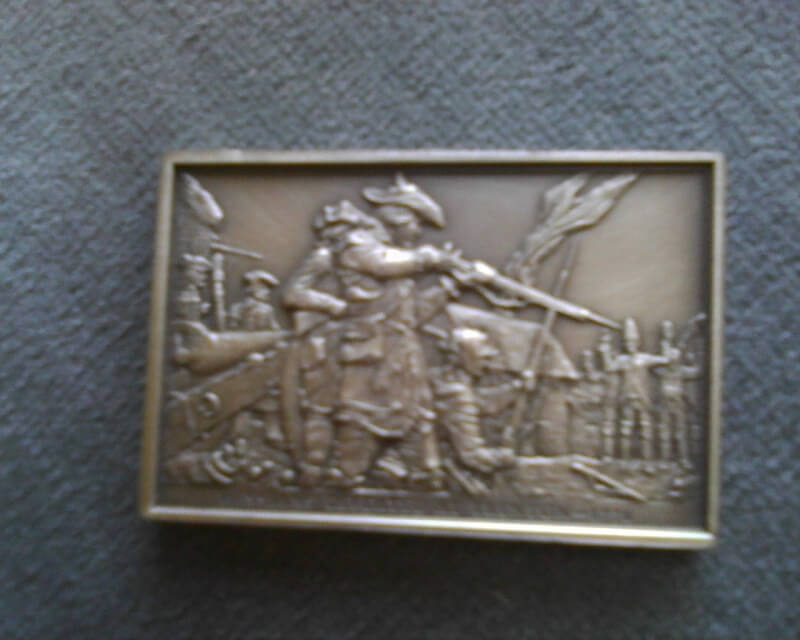 04 Feb 2017
Pictured is a pewter "Art Bar" from the Franklin Mint circa 1976. Its from a bicentennial set and depicts the Hessian defeat at Trenton. Art Bars were a big deal in the 70's and early 80's, especially those struck in silver. In a numismatic world of round things, something rectangular appealed to many collectors. Typical bars were one ounce silver and depicted every occasion imaginable. They made great gifts at Christmas, birthdays and anniversaries. Private mints like Franklin Mint and Danbury Mint did them in pewter as well, and stretched them out into series where you could purchase the latest one every month. The down side was most of the non-silver ones had no resale value on the secondary market. As for the silver stuff, they quickly became obsolete once the U.S. Mint starting striking Silver Eagles. If you look through issues of The Numismatist from that era, you will see many dealers who sold lots of silver bars. They even had price guides and included stuff like rarity, but most were melted down in 1979-1980 when silver went up to $50. I really don't see any of these any more.

Quite a few places were in vogue years ago. They put nice art into it. Today is nothing like what they used to produce.

They made things other mints wouldn't dream of and they we very nice. I remember seeing the adds on T.V.Back k then they were good deals. They they went to plates and many different items. Thanks

If I'm not mistaken and I could be on this so everybody calm down, I believe Franklin Mint once struck coins for other countries??

i have never seen an art bar before, thanks for sharing

Interesting art bar. You don't see many in pewter.

Both Danbury and Franklin did some metals of unquestioned artfulness. And to that extent it is a shame that they are now only sold at metal value, rather than as pieces of genuine medalic art. Unfortunately these two companies spread their efforts beyond the medal market. Danbury did "commemorative" ceramic plates and Franklin did car models and miniature reproductions of famous statues. I may have some Franklin items in my box of "silver stuff" but there are items that really belong in collections of really good examples of the medalic arts.

That is a nice souvenir of the Bicentennial. The Franklin Mint produced some lovely medals, ingots, other issues. Some of these items make nice "go-withs" for collectors. I rarely see any Franklin Mint issues for sale. You might have a real item there! Thanks for sharing.