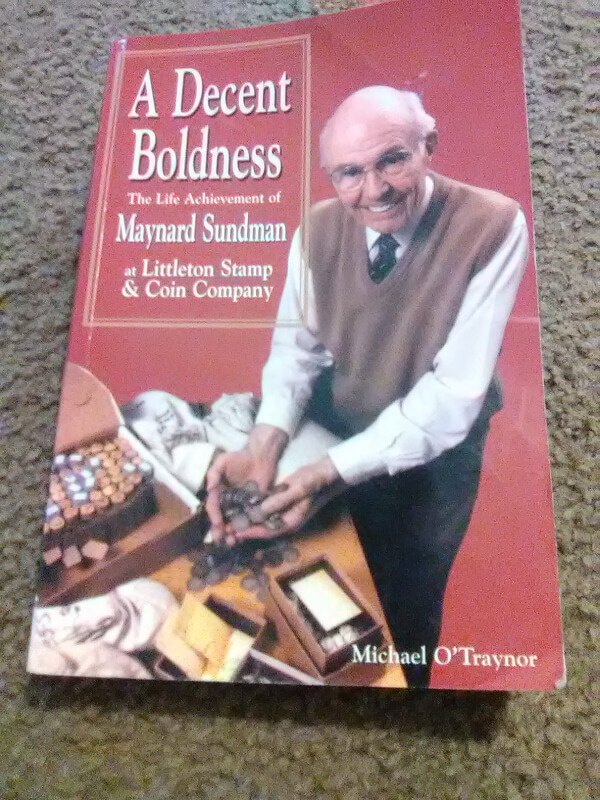 I just finished reading "A Decent Boldness," which was a business biography of Littleton Coin founder Maynard Sundman by author Michael O'Traynor.  Published by Littleton in 1995, I have to say I was a bit disappointed with the book overall. Sundman started out as a seller of stamps, later getting into coins because back then the two seemed to go hand in hand.  It was in the 1950's that Littleton entered the coin business big time, and eventually became the largest US mail order coin dealer. While the book leans heavily on Sundman's family and personal biography, not much is revealed about his numismatic dealings. Exactly what his "formula" for buying was is never revealed and what is also sadly missing are any antidotes about purchasing notable coins or collections. In fact, the only two stories I can recall were the time his son found a 1792 Washington Born Virginia piece in a junk box (purchased at 1/4 of a cent per coin!) and the time he was offered a BU roll of 1909-S VDB Lincoln's. (He told the buyer he could not purchase them from her with a clear conscience at the price he offered, but she insisted.) The book glosses over countless possible stories such as these with a scant mention of Sundman's "buyers' who simply purchased "millions of coins". Whether Sundman even had a favorite coin is not even revealed. Most numismatists never did much (if any) business with Littleton Coin and much of what they sold was considered entry level stuff. Sadly, this book (to me at least) reads too much like a straight business dealing, and I probably won't include it on my numismatic bookshelves. (Q. David Bowers has nothing to worry about.)

I avoid Littleton like covid for the most part. Once in a blue moon I'll buy on of their teasers... Like the set of P and D state and territory quarters in BU condition for a rediculously low price. Then I cancel. Happens every 4 or 5 years with me. I can't complain about the coins themselves that they then go on to offer on approval, but they are way overpriced. Too bad. If they could get in line with real reasonable market prices, they could build a legitimate following of advanced collectors. But that isn't or ever going to be their business model

Littleton has their place in the hobby and a lot of people purchase from them. I bought a few foreign coins from them when I was young. Came in little envelopes. I found them interesting, because they were foreign coins, and had interesting designs and stories.

I keep getting these envelopes with a cent in it. Also there is always an add for I will tell the truth junk coins.. When I started to collect I found out what they say and what they sell are two different things. Everything you buy from their coins is graded MS 63 is a plastic two by two plastic bag.. Fool me once haha on me Fool me twice your gone.

I don't know why they had been pushed so much. It takes away from the hobby in my opinion. They are just like the Tv coin shows which feature absurdly priced items while selling people they are getting the deal of their lifetime.

I wonder if the fact they are so volume oriented makes them immune to the excitement of the find and telling us, the numismatist, the story. I do not like them, I think they do more harm than good, but I understand the Sundmans are well respected among the numimatic royalty. I recently rereead "Just Plain Chet" the story of the founder of Krause publications. That was a joy to read. Maybe a review is in order.

I read Chet Krause's book too and enjoyed it as well. Whole different ballgame.