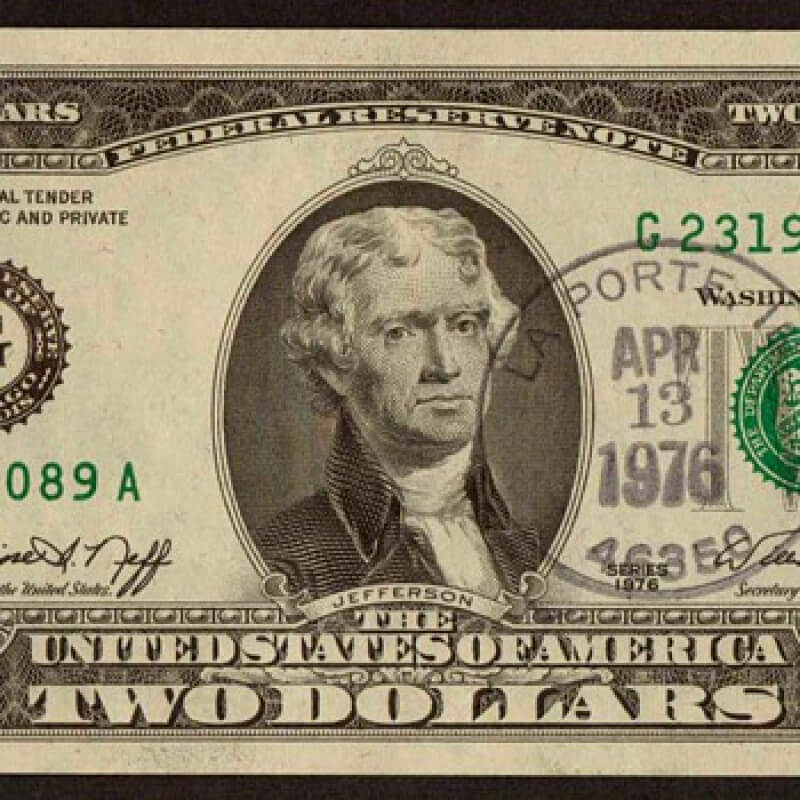 Today marks the 277th anniversary of Thomas Jefferson's birth. Numismatist's are quite familiar with Jefferson's likeness as it has appeared on numerous U.S. coins, medals and currency. We can also thank Jefferson for his involvement in U.S. coinage and the mint's early years. Despite Alexander Hamilton's and financier Robert Morris' expertise in monetary manners, it was Jefferson who realized the dollar unit would work best for America. Jefferson is also noteworthy for personally introducing 1,500 specimens of the 1792 half disme into circulation. Perhaps the greatest numismatic honor paid to our third president occurred during the 1976 Bicentennial, when $2 bills were hand cancelled with USPS commemorative stamps on the anniversary of his birth. This custom introduced a new trend to currency collecting, and examples can still be easily obtained. Although his beloved Monticello is closed due to the current health pandemic, and his simple grave will receive no visitors today, he is forever remembered in our hearts, our pockets, and our collections.

Love Jefferson and all he stood for - the people and their rights! Helping my grandson put together an NGC set MS66 Jefferson Nickels.

Very well done and with a poetic ending. I enjoyed reading your post.

To think that he was near broke financially prior to his death. Unlike elected officials today that retain their benefits and perks for life even after serving.

Very great, thanks for sharing. Enjoying the blog :)

Really interesting blog! I love all the different depictions of Jefferson! ; )

I am currently reading a book about the revolution. Did not realize today was his birthday. I have a few 2 dollar bills, but none with a post mark. thanks for the post.

Thanks for this reminder.

The various images of fJefferson are fun to review, Happy Birthday President Jefferson, Many Happy Returns.

Thanks for the indormation and great shots. I liked the blog allot. Its one of my favorite coins. I collect them. In a workhorse of a coin and is underrated. Dansxo albums slabs any way there fun and great to collect! I also bought the sets they had matte nickels people did not know that.they turn a beautiful light gold and a nice light blue.and a nice price.