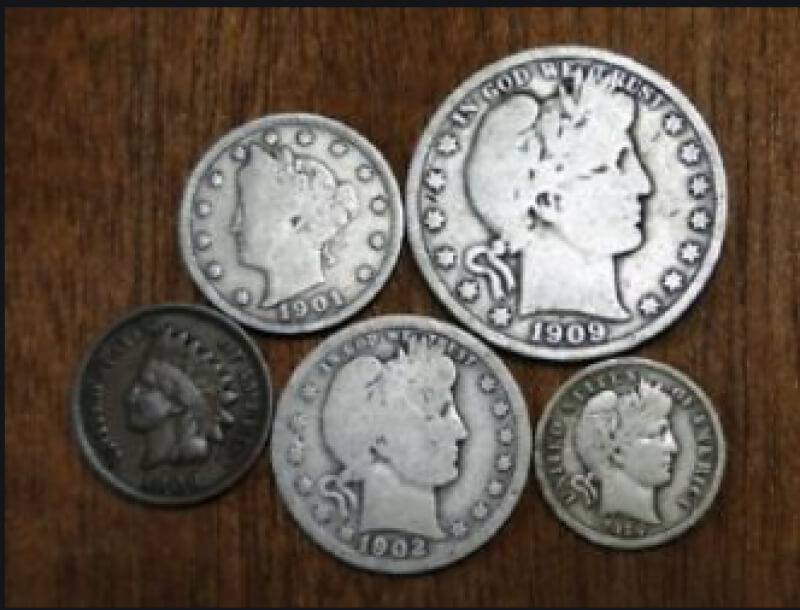 NOTE: INDIAN HEAD PENNY IN PHOTO DESIGNED BY JAMES B LONGACRE
Now, today, these coins are considered greats (I think they are cool) and are collected widely. But 100 years ago, these coins were massive fails. America wanted a cool design. There was a lot of bad press at this coin. Again, please type other bad coins in your opinion and I'll cover them on a later post.
In 1892, the Liberty Seated design had been a mainstay since, lets say, a kid from 1892 would know a grandparent who was still a kid when these came out. They were standing the test of time, showing the freedom that America had won in the classic liberty cap hanging on the post.
Charles Barber and Benjamin Harrison, the president at the time, commissioned a small group to create new motifs for the dime, quarter, and the half. Barber rejected them all and began to create his own. Now, keep in mind, that the design for the Liberty Nickel he created that debuted in 1883 had garnered bad press. But, he trudged on with it, creating a worse design (In 1892's mindset) than the group they commissioned. But the coin went out into the public anyways.
Instantly, the coin garnered horrible press. The ANS begged and petitioned to can the coins and Barber as chief engraver. America hated the coins as a whole, but used them anyway, unlike the SBA dollar I mentioned in the last issue.
In 1915 and 1916, US Mint director Charles Woodley announced changes to the Barber suite, having replaced the nickel in 1913 with the buffalo nickel. Barber made a last ditch attempt to create new designs, but was struck down early. He died in 1917, as Adolph Weinman and Hermon Macneil's motifs took over and became some of the most loved coins of all time.
So, that is why this coin was a fail. See you next time, comment suggestions down below, and in the meantime, enjoy horrid coinage fails part 2.
PS- How to you change from my default name to a cool name like Mike B?

I think the un-popularity of the Barber coinage rests in the fact that consistent designs are boring. That's the problem with British and Canadian coins that show the current monarch on everything. I find Barber did his best work with U.S. Mint medals.

The Commonwealth Coins are diluted by the fact a monarch has one full side to him or her self. Really ruins the coin.

As long as people collect coins this debate will go on. It is not a debate that is either won or lost. But facts are facts and well worn Mercury Dimes, Standing Liberty Quarters, and Walking Liberty Halves don't look any better than their well-worn Barber counterparts. I will say this though, I think the Barber obverses are rather plain. Furthermore, when the relief of a coin needed lowering Charles Barber was your man. Off the top of my head, Barber was responsible for design modifications on both the Buffalo Nickel and the St Gaudens Double Eagle. ...And yes the lowering of the relief was necessary for stacking purposes. What puzzles me most are the changes to the Buffalo Nickel. If the reverse was changed to prevent the denomination "five cents" from wearing off the mound, Why was not the date recessed to prevent it from wearing off the obverse? Sorry, I digress. :( Lots of questions swirl around concerning those aspects of our numismatic heritage and the jealousies and dislikes within the mint of its engravers towards one another.

he also was one of several engravers who tried to fix the the Walkers; I think the key problem for him with is he knew how to make coins that work in a practical sense, rather than being an artist who just made a beautiful coin. Technically he did a good job, but not a good-looking one

I agree with Golfer, every kind of coin appeals to a certain collector, for example, (DISCLAIMER... I WILL GET SOME HATE FOR THIS) most of the time, I find that toned coins look a little ugly and weird, but others LOVE it, just goes to show.

The current five-cent design disturbs me... The Lincoln Memorial cent (1959-2008) didn't really seem all that special.... The Barber coins were durable in circulation, and that's about all the positivity I can muster to say about them.... I did like the elder Barber's work, such as the Trade Dollar.

Will Barber did a good job with the Trade Dollar. I think his trade dollar and his twenty center was beautiful.

The Barber series can be attractive in high grades but suffer greatly in their typical grade of AG or Good. I think they suffer in the minds of many collectors because the Mercury Dime, Standing Liberty Quarter, and Walking Liberty Half are among the most attractive coins ever minted. I had a friend that wanted to do a Barber Half year set, I told him don't even try it unless you are willing to keep all of them in at least VF condition.

I will say it again we collect what we like. Its that simple. I have some Barber coins. I like them but not enough to go after the set thanks.for sharing your opinion. I did enjoy it.

Thank you for being brave enough to post this (and if you can't change your name under the settings, send an email to pr@money.org for assistance.) I've never shied away from telling others that I have also never been a huge fan of Barber the Younger's works, but the 1915 Pan-Pac half dollar obverse might make you think otherwise (but hey, even a stopped clock is correct twice a day, right?) It was a collaboration with George Morgan; best design I think either Barber ever made! Other than examples for my type set, I don't avidly collect Barber coinage, though admittedly, there have been some incredibly-toned, high-grade UNC Barber coins I've seen in person that are absolutely incredible coins that anyone would be proud to include in their collection. Beauty is truly in the eye of the coin holder (just be sure to buy the coin, not just the holder!) -Sam Gelberd, ANA Numismatic Educator.

To change your name: My Account in the upper right, then under the my account heading (upper left) click Update User name/password. Great blog. The series which bears his name are among my favorites.

Beauty is in the eye of the beholder. Some coin fails were other peoples nice coins maybe? Maybe the general overall success wasn't great, but some people like the fails of others. Just like some people might not find the most popular coins that great in their minds or opinion. I think you covered a lot of fails though, and I don't have any to add right now. thanks for the post and interesting read on fails.