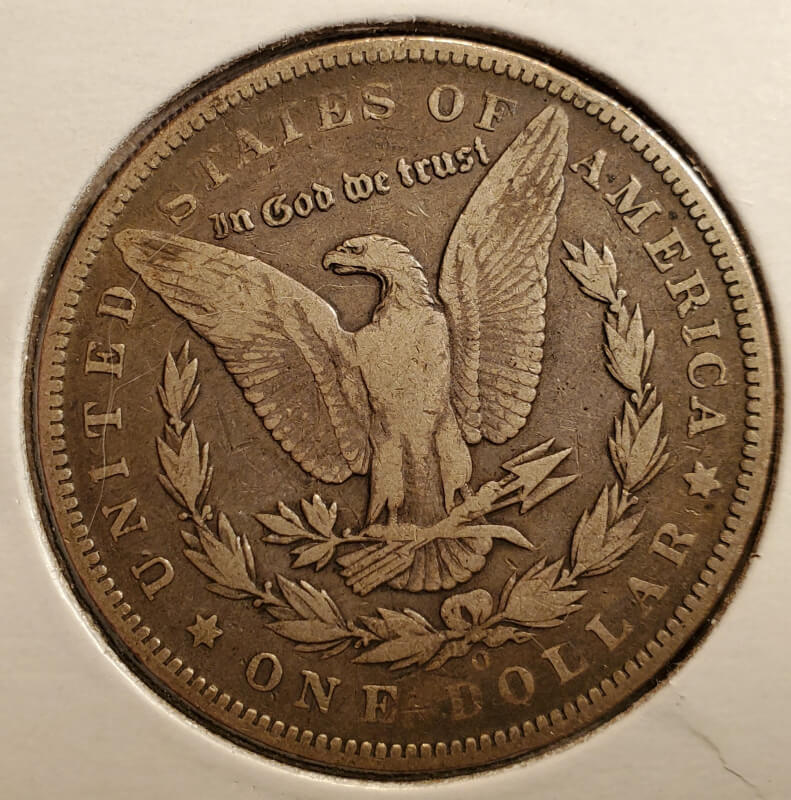 As I have mentioned previously, I received some nice coinage saved by my family. ĀIŌĆÖve had these coins for 40 years & still havenŌĆÖt completely inventoried or cataloged them since IŌĆÖve only been active just over a year.Ā I wanted to highlight some Morgan Silver Dollars that I found when I opened a storage box this week.Ā I would have thought they would have been included in the box with the other Morgan Dollars, one of which I blogged about last week, but they werenŌĆÖt, so it was somewhat of a shock to find these Morgans alone in a box full of Mercury Dimes.

The Morgan was minted 1878-1904 & again in 1921, designer; George T. Morgan, Weight; 26.73g, Composition; .900 Silver, .100 Copper, Diameter; 38.1mm, Reeded Edge; Minted in Philadelphia, Carson City, Denver, New Orleans, and San Francisco.Ā Some were melted down in 1900, many were saved making the Morgan Dollar according to the Red Book, ŌĆ£the most widely collected of all coins of their era.ŌĆØ

I was surprised to see that all of these coins were minted in New Orleans ŌĆ£OŌĆØ, maybe that is why they were in a separate box?Ā I will never know since my Grandfather & Dad packaged them.Ā Might I say they packaged them well, they havenŌĆÖt been opened in over 40 years or longer, (I donŌĆÖt know when they were packaged originally), and they have been in Alabama, Illinois, Georgia and now Nevada and they look like they were packaged yesterday, no plastic, PVC, or other nasty packaging material.Ā No sign they have been moved once, much less three times!Ā They were individually wrapped in multiple layers of plain tissue paper, some of the coins seems to have toned, some not.Ā I did not take a picture of one of the 1880 and one 1899 ŌĆ£OŌĆØ Morgan, since they were toned so dark the photoŌĆÖs did not come out well.Ā But those coins actually look nicer than some of the others, they are beautiful coins, just very dark.Ā

They arenŌĆÖt errors or any variety coin that I could identify, just plain 1880 and 1899 ŌĆ£OŌĆØ Morgan Silver Dollars, ranging in my very unexpert opinion from Fine to Very Fine condition.Ā In the end it will never matter to me what they grade because these are the coins that I associate to nights spent with my Grandfather and Dad when we went through coins and ŌĆ£Old StuffŌĆØ together when I was a child.Ā They will never be sold as long as I am alive, the memories are worth far more than any financial amount to me.

I hope you enjoy the coins, as I enjoy them.Ā Every time I go into my Hobby Room and look at the coins, itŌĆÖs like IŌĆÖm still sitting there with my Grandfather, Dad and sometimes my Uncle.Ā The memories are priceless.Ā Thanks for allowing me to remember these memories and share them with you.Ā Until later, Nuff Said!

It's great that these coins bring back great memories!!

Really nice story. I do not own a Morgan dollar yet, but someday. Their history is fascinating.

I was given a 1888 0 Morgan dollar from my great grand father, and it is one of the reasons I started collecting. Thanks for the blog!

Your family packaged the coins better than the mint does! It is great to see that these coins have been in the family for so many years.

These are beautiful! I really like the darker circulated Morgans. They have a story to tell. It's great fun to go through old boxes from the family ; )

Great blog. I love to read the family stories. My Grandpa used to gift me Morgan's as well. I quickly spent them for face value. Lord I'm old. The "O" coin seem to tone the best, most colorful. My wife would love these. She is a sucker for the dark ones. The darker the better. Thanks.

My fist Morgan dollar was an 1891-O, still have it, as I remember wanting a coin from a mint that no longer struck coins. Being a teenager/Marine Corps brat I knew a CC mint mark coin was out of reach so when my dad asked me to select something for either my birthday or Christmas from the dealer setup at the Oceanside swap meet I select that one. It eventually became part of a group of Morgan New Orleans minted dollar that I collected minus the 1895-O. Eventually my interested waned on the Morgans and when I finally sold them to head down another numismatic byway I kept the first. Like yours it probably grades VF at best. So thanks for sharing your family treasure!

Those are some nice looking coins! Ive always prefered to have some circulated specimens, as they have some unique stories to tell. Cheers, NM

Circulated coins have their own story to tell.

P.S. Thank you for your service buddy!

Those are some nice lookin' bucks you have there Stumpy! I also have a 1880-O that my grandmother left me, but it's just 1 coin, it's also in pretty good condition. Thanks for sharing your find! You are certainly the envy of the neighborhood ! Take care buddy, and we'll talk soon!

It's like a treasure hunt your grandfather left for you. That's great. Those coins contain the memories of your family cherish them and the memory they give you. Great blog!!.

I would love to sort through a treasure like that. Your family must have had a thing for New Orleans minted dollars.

40 years ago your dad and granddad set aside these Morgans! What a great thing to have. Will definately try and give some things coin related for my grandkids. Maybe they can tell their grandkids where they came from. Thanks for sharing the story and pics. Always enjoy hearing about the history of where a coin collection came from.

Wow, it must be tremendous fun going through the items your Grandfather and Dad put away. Please let us know more, as you go through the hoard.

I've always loved the Morgan's. Almost all of mine were from my grandmother and Patty's grandmother (along with the Peace dollars). I have added a few along the way. I like them better when they came from family too!