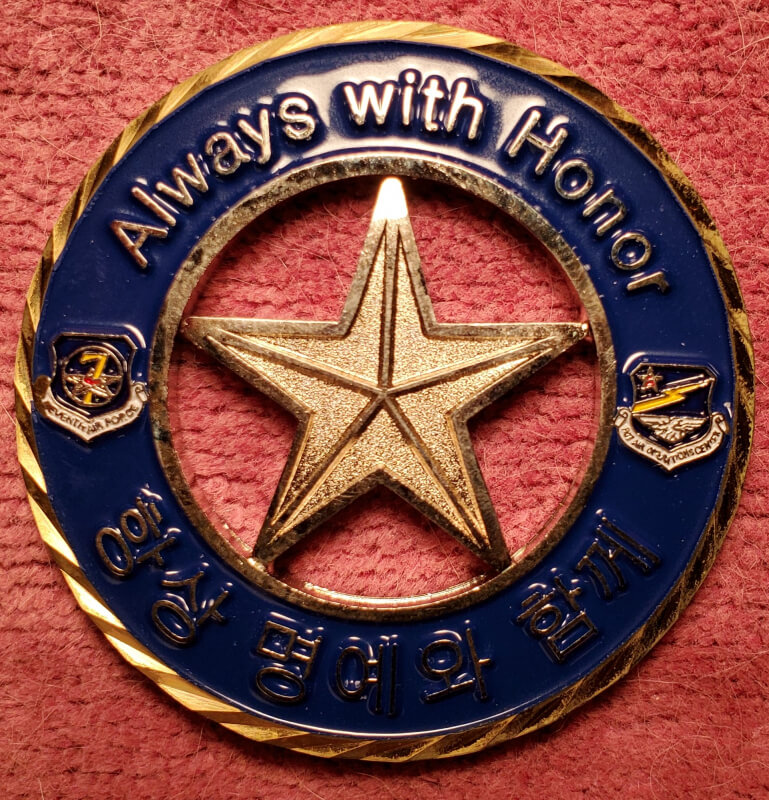 Here are a few more of the coins my wife & I were gifted by our friend this past weekend.

The first coin; 607th Air and Space Operations Center, (AOC), the AOC's mission is to plan, command & control, execute & access air, space & information operations to meet Secretary of Defense, Pacific Air Forces & U.S. Forces Korea tasking for all military operations.  Basically, these are the men & women in charge of the Air units that would be involved in any war involving Korea.

The second coin; Installation Management Command (IMCOM), which is a part of the Army responsible for the day-to-day management of Army Installations around the world.  They provide many of the same types of things expected from a small city.  Think, infrastructure, which Webster defines as "the system of public works of a country, state, or region; also; the resources (such as personnel, buildings, or equipment required for an activity".  These are the men & women who run and provide everything so that the Airmen, Sailors, Soldiers & Marines can fight in time of war.  Statistically, they represent between 75% - 85% of all military personnel.  Without these men & women, our military would not be able to fight anywhere in the world.  Sadly, in times of war these individuals have given their lives due to places they are located or stationed.  Many outside the military do not realize that their jobs as Sanitation, Culinary, Supply, (you place a support function here), place them squarely in the middle of many war zones.

United States Army Garrison (USAG) Humphreys where the IMC is based is approx. 40 miles south of Seoul, and is home to the Army's most active airfield in the Pacific.  The place is flipping huge and has a ton of different units based on or out of Camp Humphreys.  Obverse; The IMC patch flanked by the words "SUSTAIN, DEFEND, SUPPORT", over the legend; "PACIFIC REGION", with "INSTALLATION MANAGEMENT COMMAND", the American & Korean Flag to the left & right respectively, with "USAG HUMPHREYS" around the outer edge of the coin.  Reverse; This reverse needs no narrative, I believe it adequately depicts the mission of the IMC.  Note; This coin was awarded for excellence and is not easy to achieve and is only presented by the Commander or Command Sgt Major.

The last coin is from Headquarters United States European Command, (USEUCOM), which has been based in Stuttgart Germany since 1952, and now due to political reasons it has been proposed to move this command to Mons Belgium in late 2020, or early 2021.

USEUCOM is one of the eleven unified combatant commands of the U. S. Military, it's area of responsibility (AOR) covers over 21 million square miles & 51 countries & territories, including Europe, Russia, Greenland, & Israel.   Obverse; Legend "HEADQUARTERS COMMANDANT COIN OF EXCELLENCE" Lieutenant Colonel & Command Sgt Major insignia left to right respectively below the former & above the symbol of Headquarters United States European Command.  Reverse; Eagle in a V symbolizing "Victory", carrying arrows to signify willingness to fight, surrounded by 13 stars.  I personally think this design is cool!

There is currently a lot of Political debate going on over the move of the USEUCOM, the history behind that and the command itself is very interesting.  This command was established after WWII as a part of the American presence in Europe, the military backing for the North Atlantic Treaty Organization (NATO), and as such is fascinating history.

We hope you enjoyed these coins.  Later!

These are so special! What a great addition to your collection! Thanks again for sharing these ; )

You have quite a collection there! On top of that, there's nothing like great friends!

Those are pretty cool. My wife has a considerable collection of challenge coins. I enjoy looking at all of them. They all have a story behind them.

I like the triangular medal the best, thanks for sharing some more!

Wow, what a gift! Thanks for sharing! Cheers, NM

Enjoying you sharing this interesting collection. Good stories with each medal.

Great coins, and I enjoy learning about military operation

Beautiful challenge coins. I learned so much about these. Very nice collection.

Those are great. I was at a friends yesterday. He has a pretty large collection of Challenge Coins. I mentioned your blog. He about jumped through his skin. He thought they were for sale. Funny. Thanks.

Love Em. My Navy activity was in NORTHCOM but we sent most of our techs to PACOM so that was our greatest influence. They have some great Challenge Coin Display stands on AMAZON. Think about getting one if you don't already have one.

Between Stumpy and Skybluenote I learned so much today about our Military forces. You two guys could start your own army. Thank you both for your service. And God bless you both. You guys kept us safe and preserved our freedom!!

I can personally speak to the last paragraph Stumpy. That conversation was even going on when I left theater in 1982 ! NATO which was moved from France back in the 60's to it's current location in Brussels has always been political as far as I know. When I was in Mons, the SACEUR (Supreme Allied Commander Europe) lived in Castile, Belgium right outside of SHAPE (Supreme Headquarters Allied Powers Europe) where his office was/is located. My headquarters was actually in Stuttgart, Germany, but all logistical matters were handled "in-house". I actually worked in what they call the "Main Building" and was there as a "civilian", i.e. it was called a civilian assignment. I know things actually heated up after Al Haig left and Gen. Bernard Rogers took over in 1981. Prior to arriving in Belgium I had turned down a "prestigious" assignment at "WHCCA" (White House Communications Command Agency) due to the length of "TDY" (temporary duty assignments) it involved. I had just married and wanted to spend more time at HOME! ...LOL Stay safe and HEALTHY buddy! Later