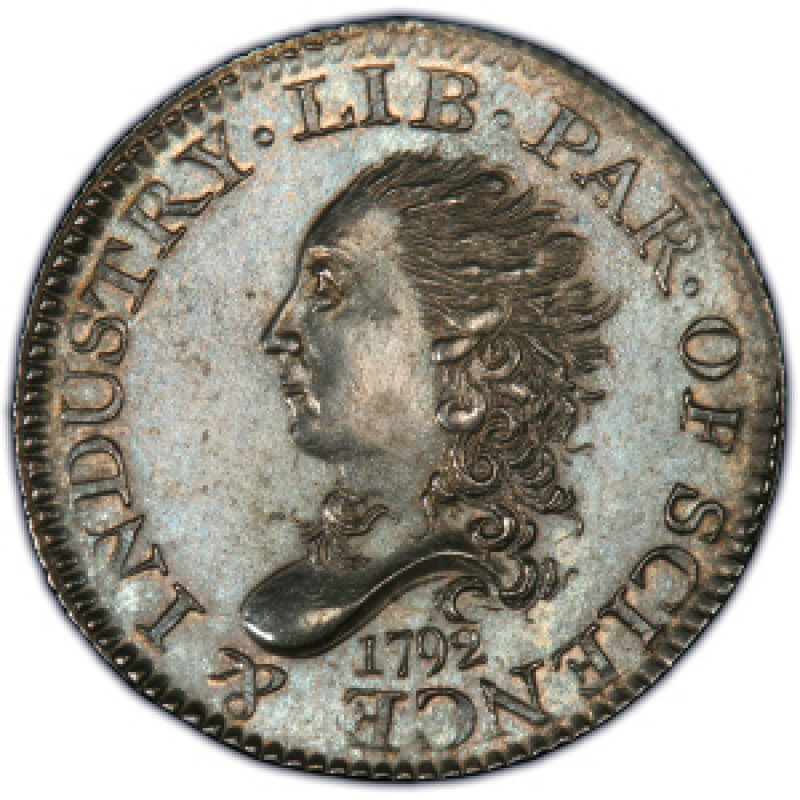 Today my blog is going to be about half dimes, so here we go! The 1792 half disme was the first official coin produced by the United States, but it was not the first coin  produced at the U.S. Mint (that distinction belongs to 1793 half cents and cents). Legend has it that George Washington provided the silver for the coinage of 1792 half dimes by donating his personal silver set, but this has been debunked in resent years. Another legend is that the portrait on the obverse is of Martha Washington, a belief that has never been approved or disclaimed. True or not, these legends add to the lore of this classic, early  American coin.
Some experts consider the 1792 half disme a pattern issue; others believe it to be a regular issue. In favor of regular issue status is the fact so many were made (1500+) and virtually all were placed into circulation. All other 1792 coins are true patterns, struck in extremely limited quantities. PCGS considers them regular issue coins. George Washington mentioned the 1792 half dimes in an address to Congress in November 1792, where he noted that some had already been made. "Disme" is a French word derived from the Latin word "decimal" (or tenth). "Disme" appeared only on the 1792 half disme and the 1792 disme patterns (copper and silver) but never on another U.S. coin, and the word "Dime" did not appear until 1837 on the Half Dimes and Dimes.
Thanks for reading my blog and have a wonderful day! Source- PCGS CoinFacts

I could really use one of those. Maybe $10000 later I can get one lol. Thanks for the great blog!

Yes, let us hope that is not Martha.... Haha! Good coin, and I hope to own one in the future! Cheers!

I enjoyed the read, wish I could have one magically appear in my collection.

Boy, I sure hope that isn't Mrs. Washington. Unique coin. I like it as a collector but wouldn't want it in my pocket. Good blog. Thanks.

Don't have a half disme of 1792. Maybe I should try for one ? Having such a historic coin would be nice. I do have a 1787 Fugio handled by Ben Franklin. Thanks for a nice blog.

I'm sitting here holding one. It seems I was getting some coins out of the safe it fell out. So when I get done with my coins back it goes. Thanks.for the blog. Enjoyed it.

bro i wish i had one of those

Good blog, is this a draped bus or capped bust coin?

Funny you should mention this coin. Someone just found a worn (Probably Fair 2) example in a dealer's junk silver bin.

That is a neat informative blog. I have always liked the idea, not the portrait on this coin, and the reverse looks like a buzzard to me. I know, I'm about to be blasted, sorry, just my opinion. Check with Bama, I think he is quite the collector of these coins. Again, very nice blog, chock full of good stuff. Later!