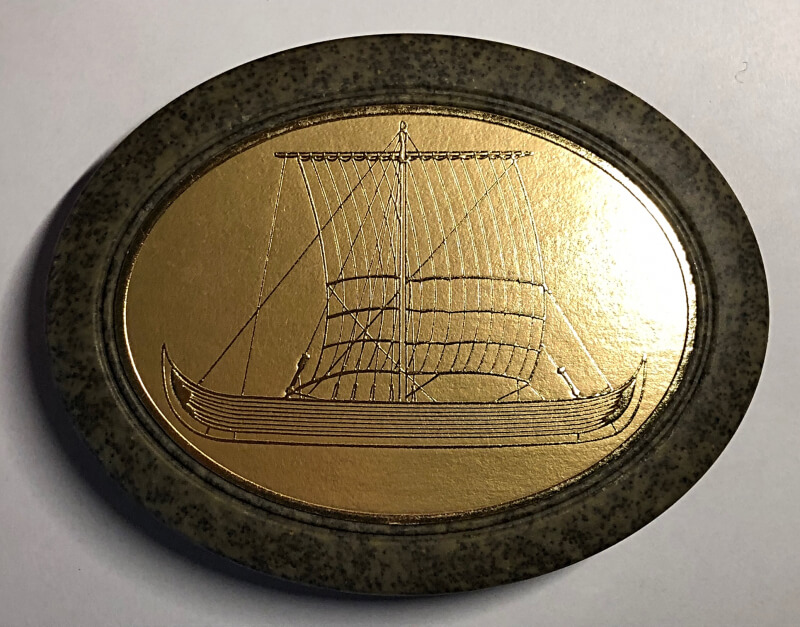 When I was going to Elementary School in the 60's it was commonly taught that Christopher Columbus had discovered America.  Of course, our 1st grade brains did not give it a lot of thought and did not ponder how someone could discover a landmass that was already populated with millions of people.  By the time I graduated from High School in 1976, we were questioning the Columbus narrative and acknowledging that the Europeans discovery of America had actually occurred nearly 500 years earlier when Leif Erikson and his hardy crew of Norsemen first sailed southwest from Greenland and made landfall somewhere along the coast of what is now known as the Canadian province of Newfoundland and Labrador.   As you may have noted, by adding the European discovery of America to Leif Erikson's efforts, history is now acknowledging that Indigenous Americans had discovered America many thousands of years earlier.

I guess the reason that Columbus got all the credit early on was because he was the first of a flood of Europeans that sailed to the Americas and began to colonize the land.  The Norsemen had a limited seasonal presence and never established permanent settlements like those found in Iceland and Greenland.  The one major settlement discovered in North America is L'Anse Aux Meadows was in northern Newfoundland.  This World Heritage Site provided conclusive proof that the Norsemen had sailed to North America and briefly settled there.

Just before Christmas, I purchased a set of coins that had been jointly issued by Norway and Canada in 1999 to commemorate the 1000th anniversary of Leif Erikson's voyage to North America.  The Norwegian 20 Kroner depicts the bust of the current Norwegian King, Harald V.  The reverse shows the prow of a Viking Long Boat with date, the denomination, and the motto Mok Ujent Land (towards an unknown land).  Both the obverse and the reverse were designed by Norwegian sculptor Nils Aas.  The Canadian 5 Dollar depicts Queen Elizabeth and the date.  The reverse shows a Viking ship sailing away from the viewer toward North America along with the 5 Dollar denomination.    The Obverse design is by Dora de Pedery-Hunt, the the reverse design is by Donald Curley.  planchets for both coins were produced in Norway.

The information provided by the insert in the box holding the coins.

Great blog! These coins are beautiful...love the ships!

Great blog Mokester ! Sounds like you and I are about the same age. Nice coins also! They remind me of the "Westward Journey" nickel set that I have. One of them has a picture of that boat I'm pretty sure and another one has the "Ocean View" which is my favorite. Thanks again for the great blog and very nice coins! Talk to ya soon buddy!

Nice coins! As longstrider said, now I have another set to aquire.

I didn't know that they made such coins. Nice pickup, and thanks for the update!

Those are some very nice coins, I love the ship. Thank you for sharing these beautiful coins.

I have also read accounts of evidence of the Norse exploring the Rockies down towards Mexico....

Thank you my friend. So much of history changes with new discoveries. Some say the Knights Templar were here before them. All I'm sure of us the Indians were here. Don't ask me when. Great blog. I'm with you. Columbus was a great explorer. Remember the earth was flat. He took that challenge on. Beautiful coins. But you always find just the right coin. Great pick up.. The Vikings raided Ireland. And practically every place else. They even made coins in Ireland that have been found. Thanks I enjoyed that very much.The Vikings even sacked York?

How history would have been different if the Norse would have stayed and colonized Canada and North America. I love the ship on that coin, the luster and cameo is exquisite!

Beautiful set. Any coins with sail boats are really nice. Thanks for posting.

It would interesting how man y countries commemorate an event together.

Thanks Mokie! Now I have another set to buy. Like you, I think, I have the thick medal and the two coin USA/Norway set. This will round it out nicely. I've been watching that Money Pit show on History and they have some great evidence of the Vikings being there, Nova Scotia. I also see more on them being here in the USA. I believe we will be finding even more proof in the coming years. Great blog. Now to eBay.