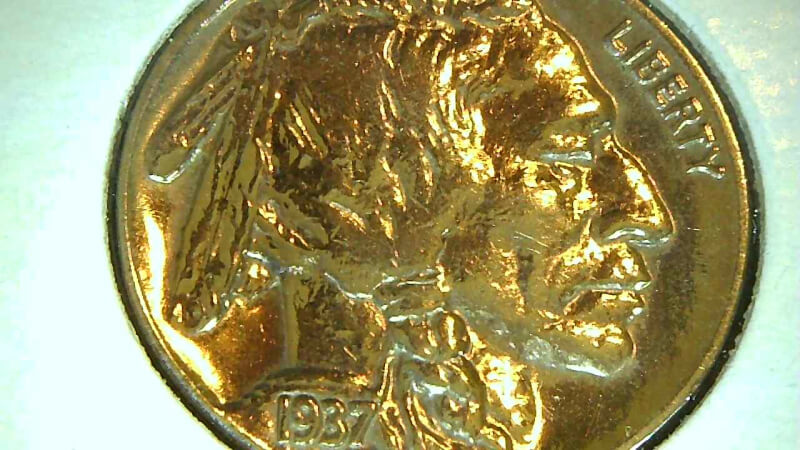 † † † † † † The conflict of the Civil War caused Americans to take many coins out of circulation due to their silver and gold content. This made coins hard to come by, so the mint tried to solve this problem by printing fractional currency. They soon attempted another possible solution. †The Act of May 16, 1866 allowed the production of a five cent coin made out of nickel even though there was a coin of this denomination (the silver half dime) already in circulation.

††††††††††† This new coin was made with seventy-five percent copper and twenty-five percent nickel. The obverse (front) of the coin had an image very similar in appearance to the two cent coin, which was first issued two years earlier. The reverse (back) depicted a five, surrounded by alternating stars and rays.

Since the reverse side of the coin was so detailed, the dies had to be replaced very often due to the extra pressure needed to make a full imprint of the design on the coin. The following year after the first release of the nickel, the mint removed the rays from the coin‚Äôs design, making both type one (with rays) and type two (without rays) in 1867.

Originally the coin did not have the word ‚Äúcent‚ÄĚ on it. Some people would gold plate these coins and use them as a five dollar coin. To stop this from happening, the mint slightly changed the reverse by adding in the word ‚Äúcents‚ÄĚ.

Officially, the liberty head nickel series ended in 1912, and the buffalo nickel was produced the year after, but in 1920 a 1913 V nickel was revealed to the public. There are only five known to exist, and are extremely rare and expensive. One specimen sold for a stunning $4,560,000 at an auction in the grade PF-66.

The Indian head nickel (or more commonly called the buffalo nickel) was first struck in 1913. The obverse depicted an Indian with the date. The reverse had a buffalo standing on a pile of earth. The words ‚Äúfive cents‚ÄĚ were located on this mound.

After release, the mint realized there were two main flaws to this design. First of all, the dies that made these coins were wearing out exceptionally fast. Secondly, the words ‚Äúfive cents‚ÄĚ were positioned on the mound of earth beneath the buffalo, and that made them susceptible to being rubbed off. Attempting to fix this, the coin was slightly changed, though this remedy did not fix either problems.

The last buffalo nickels were minted in 1938. In that year, the mint started to produce the Jefferson nickel.

When I first heard about the early Liberty Head nickels being plated with gold and passed on as gold piece I was really fascinated. Good blog!

Good blog. Well researched! Thanks for the information! ; )

Nice blog with a great list of sources. There sure are some tough coins to complete that set. Thanks I enjoyed this blog.

Great set . I need one more. The 1885. In any condition its pricy to say the least. Thanks for the research and work. I enjoyed the blog.!

Good information. I myself do love the Bust 1/2 dime and the Shield 5 cent series.

My nickel collection starts with Buffalo nickels. But the history leading up to it, and subsequent change over from silver half dimes to actual nickel five cents pieces is educational and intriguing. Always enjoy learning the history behind what led up to a coin or series of coins being produced. Thanks for sharing.

I know all about that silver hoarding, I'm missing most of the dates at that time in the Seated dime series. I picked a tough one, six years in and lacking 33 to completion. Nice read, very well researched.