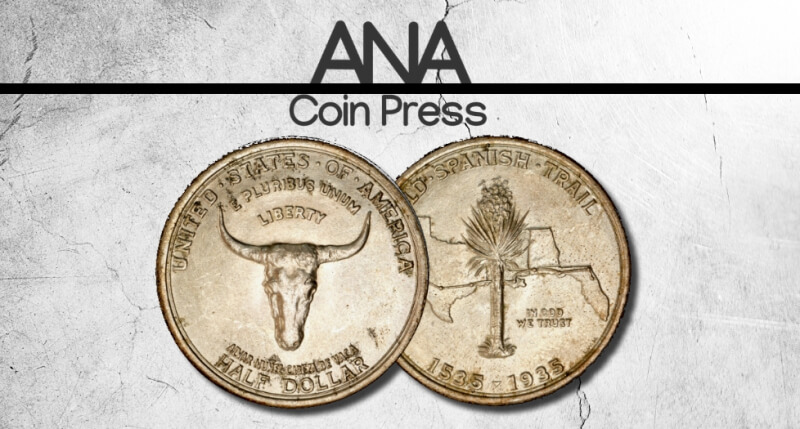 Coins and banknotes are defined by their imagery, and as the old saying goes, a picture is worth 1,000 words. Still, it’s only through language, inscribed or printed, that a coin or banknote can truly tell its story. Who made it? How much is it worth? What does it portray?

In answering these questions, coins and currency use the language of their country of origin. You can see the world's history in the languages on money: French, and especially English, appear worldwide, and there's far more Spanish and Portuguese from the Western Hemisphere than from Europe.

You can also see linguistic variety in the presentation of country names, which are not necessarily the same in all languages. Sometimes the translation is easy; “Brasil” is obviously Brazil, and you can probably guess that “République Française” is the country English-speakers call France.

"You certainly don't need to be a linguist to enjoy numismatics. But, after studying the many, varied uses of language on coins and currency, you just might become one."

But it’s not always so clear. In German, Germany is “Deutschland.” The country we knew as the U.S.S.R. abbreviated itself “C.C.C.P.” And you might need to do some searching to figure out that “Confoederatio Helvetica” is the Latin name used by multilingual Switzerland, and that "Magyar Köztársaság" is Hungary in Hungarian. Oh, and coins without a country name? They’re probably from Great Britain.

The familiar letters of the Latin alphabet are used in English and most European tongues, but other countries use different symbols. For example, the Greek and Russian alphabets are a mix of familiar and unfamiliar letters. Farther afield are Hebrew and Arabic, Korean and Japanese, and the character-based presentation of Chinese. Interestingly, in the global economy of the 20th and 21st centuries, one can find connections to English even in countries where it is not official or widely used: nearly all nations use the same Arabic numerals familiar on American money.

Often, one language isn't enough. Canada is a good example, officially bilingual for all government matters including coins and currency. At one time there were separate English and French language banknotes, but today all Canadian money either includes both languages or is otherwise jointly understandable. 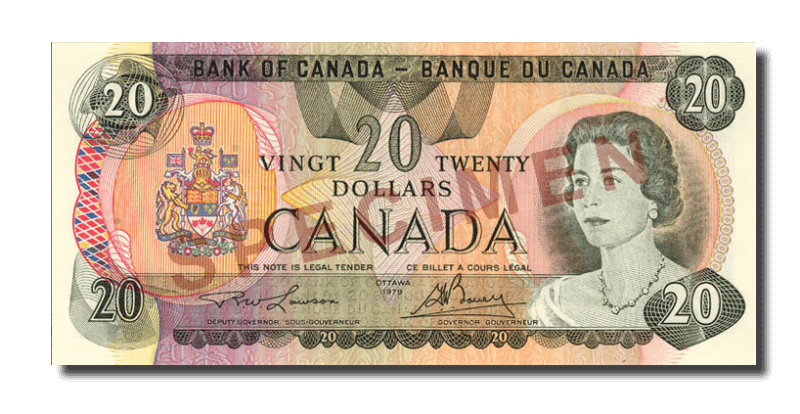 Communication is more complicated in the European Union, with its myriad countries, languages, and writing systems. The solution to this complexity, naturally enough, is to keep things as simple as possible under the circumstances. The only words on coins' "common sides" are EURO and CENT. Banknotes present the common currency unit as EURO and ΕΥΡΩ (Greek), with abbreviations of “European Central Bank” in five alphabets representing 19 languages.

Even that linguistic mix pales in comparison to India, where banknote denominations are expressed in 17 different languages. Hindi and English are on the face, with 15 additional official languages on the back. 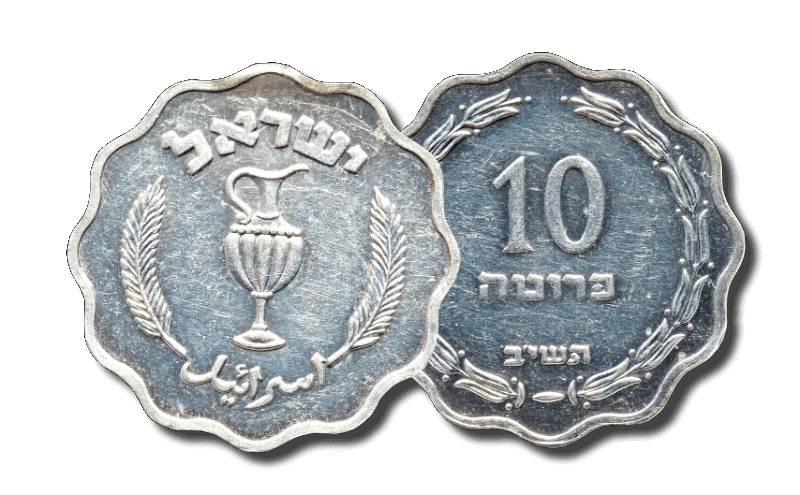 Beyond practical matters of communication, the language on money often intersects with important issues of identity. In Mauritius, the ordering of Tamil and Hindu wording on a 1998 banknote issue sparked protests that led to the resignation of the head of the central bank and the replacement of the offending banknotes. When Ireland's modern coinage debuted in 1928, the use of Gaelic on coins represented the new country's sovereignty and culture. And when Hebrew appeared on Israeli coins after independence in 1948, it was just decades after its revival as a modern language.

Sometimes, believe it or not, contemporary coins and currency rely on a language that has not been widely spoken for centuries: Latin. The longstanding American motto of unity, E Pluribus Unum (one, out of many) is a great example.

Latin is also commonly used for royal titles. Queen Elizabeth’s designation as "By The Grace of God, Queen, and Defender Of The Faith" defies sensible abbreviation, but shortening "Dei Gratia Regina Fidei Defensor" to D∙G∙REG∙F∙D fits quite nicely on a coin. And sometimes Latin is used for a touch of gravitas, for example, with "FIDEI SVORVM REGNAT" (He reigns by the faith of his people) on a 1939 Canadian dollar. 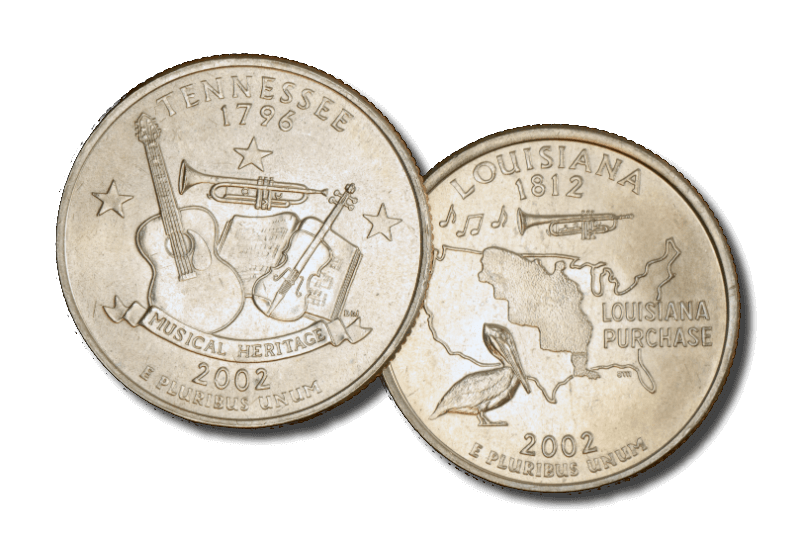 Taking an even broader view of human communication, we can find a wide variety of “languages” on the world’s money. In the United States, state quarters honoring Tennessee and Louisiana state play musical notes, and a West German 10 mark note honoring Carl Friedrich Gauss computes a mathematical equation.

The raised dots of Braille appear on several American coins: 1995 and 1996 Paralympic silver dollars, the Alabama state quarter (featuring Helen Keller) and the 2009 Louis Braille dollar. On the Louis Braille coin, the inscription (“BRL,” as “Braille” would be abbreviated in Braille) is actually readable by touch.

The dots and dashes of Morse code announced “V” for victory on an American World War Two commemorative from 1993, and spelled “S,” Guglielmo Marconi’s first wireless message, on a British two-pound coin dated 2001. On Canadian nickels of 1943-1945, Morse code spelled out the uplifting wartime message “We Win When We Work Willingly.”

Computer code has even made its way onto money, via a 2011 issue commemorating the 100th anniversary of the current Dutch mint building. The design includes a QR (Quick Response) code, one of those blocky patterns you’ve probably seen in advertisements, meant to be scanned with a smartphone. 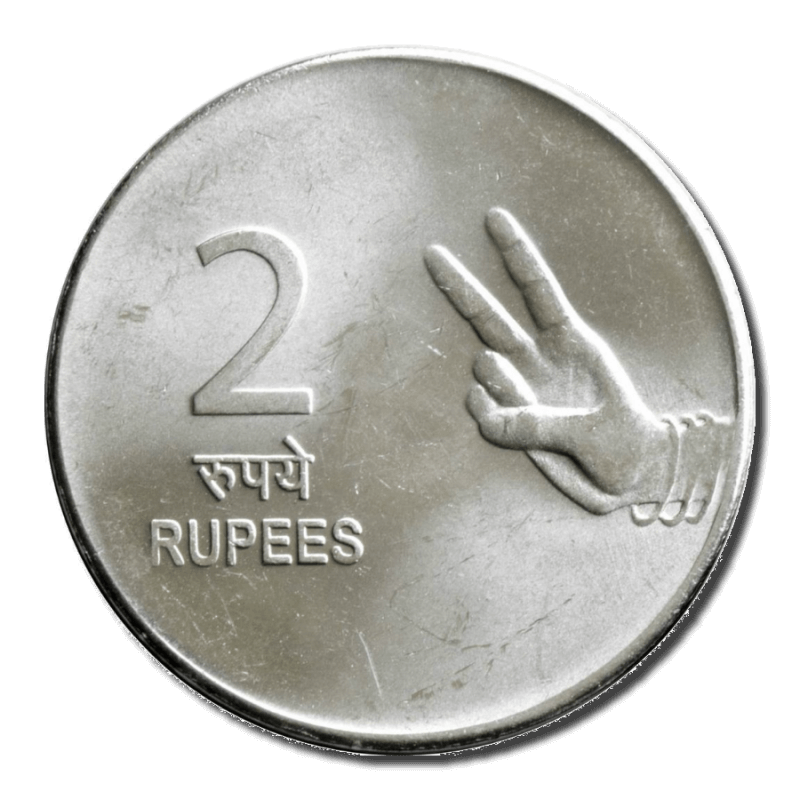 In the “pun intended” category, wordplay is sometimes an interesting part of numismatic design. In the United States, the “Old Spanish Trail” commemorative half-dollar of 1935 honors Spanish explorer Cabeza de Vaca with an image that conveys the literal meaning of his name: the head (cabeza) of a cow (vaca). The mintmark for the British Royal Mint facility in Llantrisant (Welsh for “parish of the three saints”) is, appropriately, three crosses. And some recent Indian coins express their denominations in gestures as well as word: an upraised thumb for 1 rupee, and an index and middle finger for 2 rupees.

And of course, where there’s language, there are inevitably “typos.” Some Brazilian coins in 1922 accidentally commemorated the centennial of “BBASIL,” and some 1916 Peruvian ½ dinero pieces were marked “FERUANA.” In 2008, an initial run of 50 peso coins identified their origin as “CHIIE” rather than “CHILE,” a mistake which cost some mint officials their jobs. And in 2010, the microprinting on a Mexican 100 peso note should have read “SUFRAGIO EFECTIVO” (effective voting), but was instead “SUFRAGIO ELECTIVO” (elective voting). The notes were not withdrawn or corrected, but Mexican President Felipe Calderón did personally apologize for the error.

Every now and then, language itself becomes a numismatic subject. British coins have celebrated linguistic milestones: the 400th anniversary of the King James Bible (2011) and the 250th anniversary of Johnson’s dictionary (2005). And it’s neat that on current Jefferson Nickels, the word “Liberty” is presented in Jefferson’s own handwriting.

You certainly don't have to be a linguist to enjoy numismatics. But, after studying the many, varied uses of language on coins and currency, you just might become one.