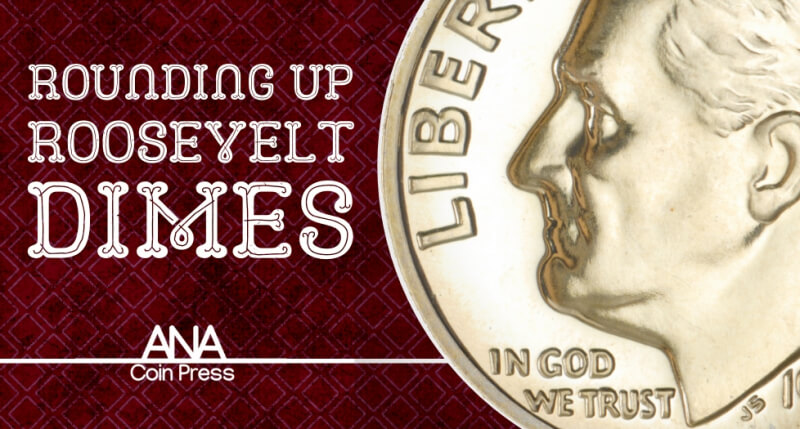 America's 10-cent piece, symbolic of our respect for a President's service during a difficult era, is relatively easy to collect.

One great way to enjoy numismatics is to specialize in a particular series. Numismatists often pursue their favorite coins in detail, learning all aspects of their history while putting together a complete collection. One popular collecting strategy is to acquire an example of every possible date and mintmark combination in a series. As an example of this method, here are some suggestions for assembling a set of Roosevelt dimes. 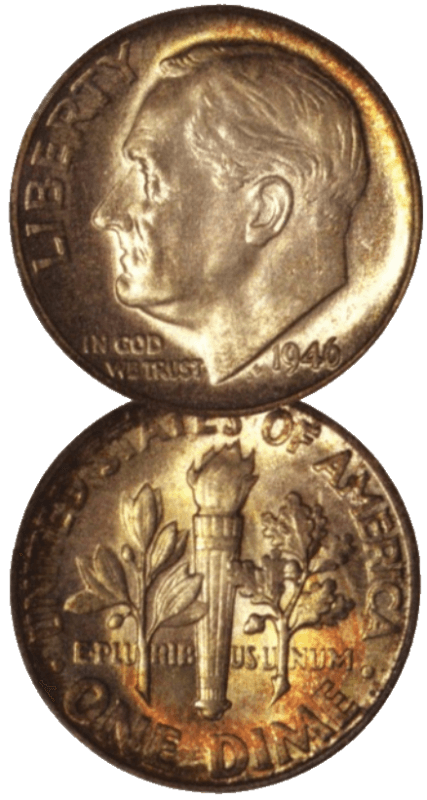 This coin first was issued in 1946, the year after the death of our 32nd President. The dime was a natural choice for honoring Franklin D. Roosevelt, a polio sufferer who had been instrumental in the March of Dimes fund-raising campaign to combat the debilitating disease. The obverse portrait of Roosevelt by Mint Chief Engraver John Sinnock later drew praise from art historian Cornelius Vermeule, who called it "a precise, detailed portrait which shows full force of character amid a faithful portrayal. "

Initially, Roosevelt dimes were 90 percent silver, but the rising price of the metal caused a change in 1965. Subsequently, dimes have been made of a "clad" composition, with outer layers of copper-nickel bonded to an inner layer of pure copper. If you look at the edge of a contemporary dime, you can see the layers.

Three mints have produced Roosevelt dimes for circulation. Philadelphia issues originally carried no mintmark, but have displayed a "P" since 1980. Denver and San Francisco specimens have "D" and "S" mintmarks, respectively. On a few occasions, mostly during the coin shortage of the mid 1960s, mintmarks were suppressed. (Mintmarks are located to the lower left of the torch until 1964 and above the date since 1968. )

One attraction of the Roosevelt dime series is that all coins are readily available — even in nice, uncirculated condition. Individual pieces do vary in quality, so look for specimens that are appealing and well preserved. The copper-nickel clad issues are common because of their tremendous mintages. Silver dimes no longer circulate, but a plentiful selection still can be found in the numismatic marketplace. 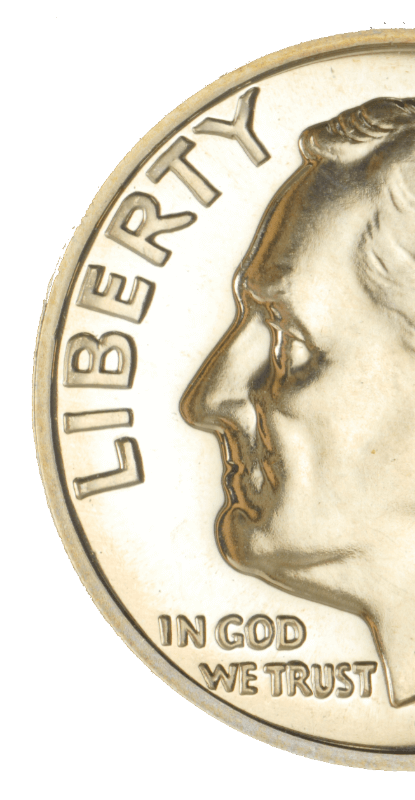 No Roosevelt dimes are truly rare, and even the most expensive pieces (also known as "keys" to the series)— the 1949 Philadelphia issue, and San Francisco specimens from 1949, 1950 and 1951 — are quite affordable. Overall, you can put together a nice set in top condition, without great expense.

Your collection also can include non-circulating issues made specifically for collectors. Proofs represent the finest in coinage production and are boldly struck with mirrored fields. The Philadelphia Mint made silver proof dimes, along with circulation strikes from 1950 to 1964. San Francisco has issued clad proof dimes since 1968 and silver proofs since 1992, and these are the only recent dimes with "S" mintmarks. In 1996 the West Point Mint (near Roosevelt's home in Hyde Park, New York) produced dimes with a "W" mintmark to celebrate the series' 50th anniversary. All these collector-only pieces were issued in annual coinage sets, but dealers typically sell them individually. The early Philadelphia proofs and some of the recent silver proofs are the most expensive collector-only issues, but even these are reasonably priced.

Really, the only scarce Roosevelt dimes are die varieties, though these are not essential for a date/ mint collection. One example is the 1982 "no mintmark" dime, created when a die accidentally was put into service without a mintmark. (If you are interested, you can add this and other varieties to your collection later.)

The Roosevelt dime is a diminutive coin, but assembling a complete set is no small accomplishment. As you collect this accessible and affordable series, you'll find that the pleasure of acquiring each individual coin culminates with a set that will provide lasting enjoyment.