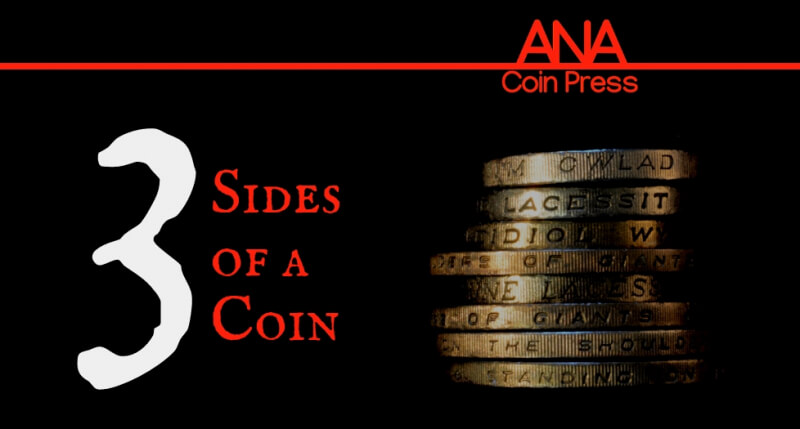 Three Sides of a Coin

Everyone knows that a coin has a front and a back, and that you’re supposed to call heads or tails when one is flipped. And, even though it’s theoretically possible, only the most optimistic coin-flippers would think there’s a chance of a coin landing on its edge.

But numismatists think of things a bit differently. Instead of heads or tails, numismatists distinguish obverse and reverse. And numismatists realize that there’s also a lot to see on a coin’s “third side” – its edge.

How can you tell which side is which? Edges are easy, but obverses and reverses can sometimes be tricky. For United States coins, whose designs (at least in a general sense) are specified by legislation, here are some (admittedly imperfect) rules:

Rule #1: If one side has an image of liberty, or a portrait of a real person, that side is the obverse.

Rule #2: If a coin with a face value larger than 10 cents has an image of an eagle, even a small one, it’s on the reverse.

Rule #3: If rules #1 and #2 still don’t resolve the matter: the date is on the obverse, and the denomination is on the reverse. 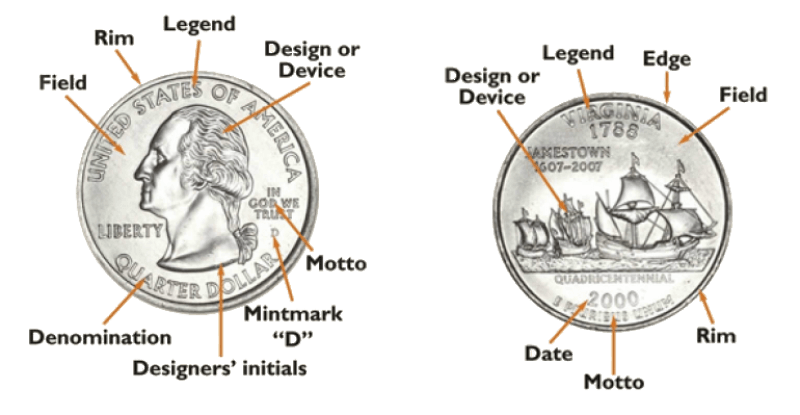 Worldwide it’s even more complicated, so there’s only a single rule, relatively limited in scope: if an image of a monarch or other ruler appears, it’s on the obverse.

Speaking of monarchy, obverses are the basis for a longstanding tradition involving the British crown: each king or queen faces in the opposite direction from his or her predecessor. But, when King Edward VIII – not exactly a traditionalist – came to the throne in 1936, he considered his left-facing profile to be most flattering, even though it had him facing in the same direction as his father, George V. Compromises offered by the Royal Mint, including transposing his left profile to his right side, were to no avail. What the King wants, the King usually gets.

Not always, though. Within a year Edward had abdicated, becoming “the king who gave up the throne for love,” and his coins never made it past the pattern stage. George VI, his brother and successor, then had his portrait facing left, acting as if Edward would have preserved the tradition of alternation. An interesting approach, to say the least. But who can quarrel with a little revisionist history between family members and monarchs?

Monarchy was very much on George Washington’s mind in 1792, as the Coinage Act of 1792 made its way through Congress. The original version specified that American coins should carry an image of the current President. But Washington, appropriately sensitive to the mismatch between monarchical imagery and the spirit of the new American republic, objected. Since then, all American coins have featured obverse images “emblematic of Liberty," sometimes allegorical, sometimes in the form of real people – including historical Presidents.

Today, most American coins do not have obverses and reverse designs by the same artist, or even from the same era. The Lincoln Cent’s obverse is more than a century old; its reverse was introduced in 2010. The portrait of Jefferson on the nickel’s obverse dates from 2006, while the reverse image of Monticello debuted in 1938. State Quarters, America the Beautiful Quarters, and Native American Dollars have constant obverses and rotating reverses, while Presidential Dollars have sequential obverses paired with the same reverse. And designs for contemporary commemoratives are typically selected one side at a time.

Sometimes obverse and reverse are not just independently created; they’re actually, if accidentally, mismatched. Two-headed or two-tailed coins are novelties, produced outside the mint, and have no value. But sometimes genuinely strange things occur, in the form of “mules” with unintended combinations of obverse and reverse.

Sacagawea dollars with a state quarter obverse are ultra-rare, and there is also a unique 1999 cent with a dime reverse. Other mules from other places are more widely available. In 2008, some British 20 pence coins ended up with an old obverse and a new reverse, leaving the coin without a date. Errors can even cross international boundaries; in 1967, the British Royal Mint accidentally made 2-cent pieces for New Zealand using an obverse design meant for the Bahamas, half a world away. 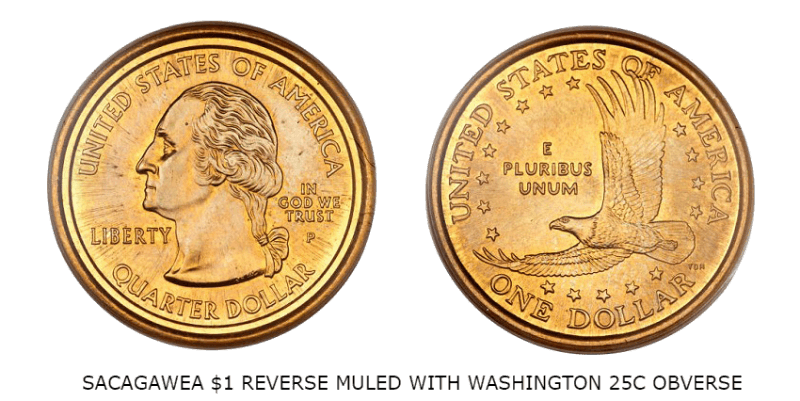 All of this goes to show that things are not always as expected, but they are always interesting, when it comes to obverses and reverses.

Edges can be equally compelling, in their own subtle way.

Today, we take it for granted that a round coin – and nearly all coins are round – will be a perfect, 360-degree circle. But such symmetry is actually a relatively recent development. In modern mints, blanks for coinage are created in perfect, cookie cutter fashion. And as coins are struck between obverse and reverse dies, they are constrained with a “collar.” Given the high pressures involved in striking, a coin made without the guidance of a collar will be significantly misshapen – an error known as a “broadstrike.”

Coin edges may be plain, or they may be “reeded” with dense lines around the perimeter. Grooved edges and various other patterns or decorations have also been used, but they’re less common. Some issues have lettered edges, conveying a message with words or symbols. Edge lettering examples include denominations on some early American coins, and country-specific messages on contemporary 2-euro pieces. Lettering may be punched into the edge (incused) or raised from it, the former being easier to impart because it can be done separately from the striking process.

Decorated edges were originally a device to prevent fraud, and to keep underweight precious metal coins out of circulation. If an unscrupulous person were to file some metal from a coin’s edge, hoping to profit from the shavings, the act would be easily noticeable on a coin with a reeded, lettered, or otherwise decorated edge. Today, with precious metals absent from the world’s coinage, the same protective imperative doesn’t really apply. But, in a nod to tradition, and sometimes as a means of expression or a mark of identification, edge decorations are still widely used.

When Britain’s “round pound” coin was introduced in 1983 its edges were both reeded and lettered. The self-referential edge inscription on that initial issue was “DECUS ET TUTAMEN,” Latin for “an ornament and a safeguard,” with various inscriptions used thereafter. The “safeguard” role became highly relevant amid a plague of counterfeit pound coins – it was estimated that in the early 2010s, around 3% of all pound coins in circulation were counterfeit – an extraordinarily high proportion. Fortunately, fakes could be detected by their poor production values, and among the telltale signs were edge decorations that weren’t appropriate for the date, or were otherwise crudely made.

A coin's third side isn't as prominent as its first two. But, now more than ever, hobbyists are starting to realize that numismatics on the edge can be interesting indeed.

As a solution to the counterfeiting problem, the Royal Mint introduced a new, high-tech type of pound coin in 2017. With other security measures in place the edge lettering is gone as a safeguard, replaced by a purely ornamental reeded edge.

For American Presidential dollars, edge lettering was a matter of artistry rather than security. When the coins were introduced in 2007, some required inscriptions (date, mintmark, and In God We Trust) were located on the coins' edges, in order to provide a larger “canvas” for obverse and reverse designs.

But production problems cropped up almost immediately. Lettering was squeezed into the coins’ edges after striking, in an entirely separate process (to avoid marring the lettering during striking), and it’s easy to imagine what could have – and did – go wrong. Some George Washington dollars skipped the edge lettering process entirely, resulting in an inadvertently plain edge, and some John Adams dollars went through the process twice, resulting in myriad patterns of garbled messages. These errors represented only a tiny proportion of the total mintage, but that was more than enough to attract attention in the hobby and beyond. Process improvements drove the error rate down, but still not quite to zero.

There were also complaints that with a date on the edge, rather than prominently on the obverse, the coins looked more like tokens. And with the motto In God We Trust also on the edge, and therefore not immediately visible, some criticized the coins as “godless.” The result: starting in 2009, In God We Trust was moved from the edge to the obverse.

A coin’s third side still isn’t as prominent as its first two. But, now more than ever, hobbyists are starting to realize that numismatics on the edge can be interesting indeed.